Home Well-Being Faux Meat Has Gone Mass Market. But is it Actually Good For... 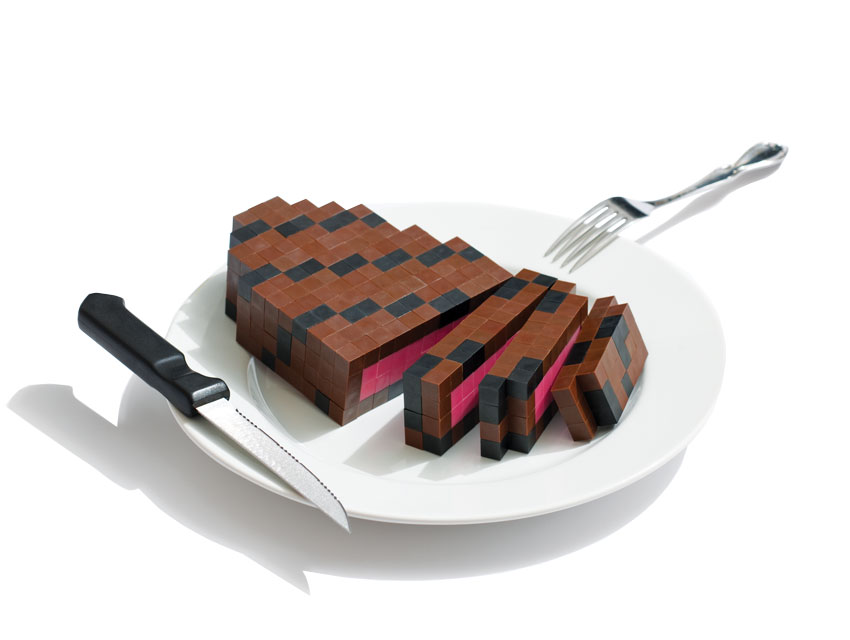 Not that long ago, vegans and vegetarians who wanted tasty and convenient alternatives to eating meat had more or less two options: Will that be a fake hot dog or a fake hamburger? Certainly these items came in handy at cookouts, where the lone vegan could throw a Boca burger on the grill and the brownish patty with ersatz sear marks could “pass” in meat drag better than a block of pasty tofu. Even in ahead-of-the-food-trend L.A., the offerings beyond Thai restaurants and twee vegan joints have been limited.

Things have changed in the past five years. There are now enough mock-protein products on the market to fill a meatless butcher shop. (An oxymoron, yes, but a vegan cheese shop recently opened in Hollywood.) There’s maple-smoked veggie bacon, chipotle-flavored seitan steak, and beer-braised tofu bratwurst, to rattle off a few choices. These products aren’t being put on shelves by some mustachioed dude in a pair of Toms at Whole Foods (though that is probably happening, and that section is well stocked). The most significant uptick in meatless meals is at major supermarket chains like Ralphs and Vons, where there are specific areas devoted to plant-protein alternatives to meat and cheese. “There used to be a handful of places where you could get these products,” says Jon Camp, a longtime vegan and the executive vice president of the nonprofit organization Vegan Outreach. “Now you can get them just about anywhere.”

The consumption of tofu, wheat gluten, and soybean curd as part of a routine diet has been common in Asian cultures for thousands of years. In the United States, switching plant protein for animal protein is still relatively new. During the last four decades, Americans have been steadily eating less red meat, according to the United States Department of Agriculture. We are also becoming more aware of the perils associated with factory farming and are more selective when it comes to the quality of the meat we eat. Social movements like #MeatlessMonday and books like Mark Bittman’s VB6: Eat Vegan Before 6:00 have popularized the term flexitarian, which refers to semivegetarians who will occasionally indulge in sustainably caught seafood, grass-fed beef, or free-range chicken. (The word was added to Merriam-Webster’s in 2012.) “The majority of sales of ‘meat analogues’ are to omnivores who want to reduce their consumption for health or environmental reasons,” says Camp. Despite the increase in famous vegans—including Bill Clinton and Ellen DeGeneres—fewer than 3 percent of Americans categorize themselves as vegan, according to a 2011 Harris Interactive study commissioned by the Vegetarian Resource Group. Yet 33 percent of the respondents said they frequently go meat-free.

Among the top manufacturers tapping into the “less killing, tastes great” trend is Gardein, a British Columbia-based company that has its American headquarters in Marina del Rey. Launched in 2003, Gardein (“garden” plus “protein”) is one of the largest distributors of veggie chicken, fishless fish, and faux beef, supplying more than 22,000 stores in North America (the manufacturing plant is a 250-plus-employee operation). Gardein is also a key plant-based protein supplier for several universities, including UCLA and USC, and L.A. restaurants such as Tal Ronnen’s haute-vegan Crossroads, the pub franchise Yard House, and the Santa Monica-based vegetarian fast-food chain Veggie Grill.

“One of our sayings is that we are trying to do a food that people will love in a shape that they are accustomed to,” says Yves Potvin, Gardein’s 59-year-old founder. “The problem is getting people over the initial stigma. It’s like the car business. If your first driving experience is in a Pinto, you won’t drive a car ever again. There are so many bad products on the market that if your first taste of veggie beef is terrible, you’re never going to try it again.”

The French-Canadian chef ought to know. He is credited with inventing a successful early example of the veggie dog, at the height of the Jane Fonda and Jazzercise era in the early 1980s. While the product was probably more of a Honda Civic than a Pinto, the art and science of transforming plants into meat wasn’t there 30 years ago. Potvin’s efforts at Gardein, however, are nothing short of a miracle.

The ground floor of Gardein’s two-story office space, located in an arty enclave of the marina, looks like a cross between a Food Network cooking show and a CB2 catalog. A modern dark wood communal table dominates the room, which has an open kitchen, a large island-bar, and a few stools. My lunch companions are Ashlyn Neff and Russell Barnett, two of the six members of Gardein’s L.A.-based marketing team.

Something smells good. A staff chef named Amy Veraldi carefully arranges three “chick’n” sliders on a shiny plate, each with a slice of tomato and circle of lettuce as delicate as a doily. Chicken flavor is notoriously difficult to capture in a vegan substitute. From the first bite the slider tastes like a breaded chicken sandwich. The panko crumbs are crunchy; the soy-based white meat is toothsome, not soggy. It’s delicious—and a little freaky.

“Texture is everything,” says Barnett. To prove it he takes one of the fishless fillets that Veraldi has placed in front of us and splits it open to reveal a flaky interior. I try one of the finger-size pieces. It’s such a spot-on imitation of cod, I don’t know whether the Gorton’s Fisherman could even tell the difference. Not only does it taste like fish, it’s engineered to mimic the health benefits you might find in a piece of salmon. Gardein adds algal oil (an algae extract) to its formula for the Omega-3s—the fatty acids that got people switching from meat to fish in the first place.

No question, Gardein is the pitch-perfect Memorex of meat. But are its products—or any synthesized plant protein—more healthful? Environmentally, yes. The carbon footprint (and water usage) for beef production is massive compared with that of plant-derived foods, but for personal diets, it’s more relative. Technically Gardein and its competitors manufacture processed food—a fact more than a few vegan bloggers who consider fake meat junk food like to point out. Processed food is something most healthy people try to avoid, but Barnett clarifies what “processed” means in the Gardein factory. “Our products are made like how pasta and bread are made,” he says. It’s a process, he explains, not processed.

To make Gardein’s Mandarin Orange Crispy Chick’n taste like Chinese takeout chicken (which it does) requires roughly 40 ingredients, from soy protein isolate to beetroot fiber, which are pushed through a large compression cooking device called an extruder. The extruder is indeed a processor, though it’s not the same as Franken-building a hot dog out of pork parts. The accompanying packet of orange sauce lists 24 ingredients (including a fair amount of sugar). Most of the ingredients on the Gardein bag are non-GMO and recognizable to the average person, which can’t be said for some of the other brands I’ve tried.

Plant-based alternatives are low in fat and high in protein. But the stealth health hazard here is sodium. Coaxing wheat gluten into tasting like smoky bacon is no easy task, so it’s no wonder that salt is a go-to flavor enhancer. Trader Joe’s sells a soy-based chorizo containing 30 percent of the daily recommended amount of sodium per serving. Factor in the extras like taco shells, salsa, and canned black beans, and you could max out your recommended sodium intake with a single meal.

Another pitfall for the unsuspecting flexitarian is portion size. Vegetable protein can be lower in calories than meat, but not if you blow past the recommended servings, which is easy to do. The picture on the front of Gardein’s package of Sweet and Tangy Barbecue Wings shows a luscious stack of chick’n pieces. Only after I’d devoured ten did I see that the indicated portion size is four pieces. I snarfed 180 extra calories, not counting the sauce.

The smartest way to enjoy fake meat is to treat it like real meat: thoughtfully. “Partake in meat alternatives as a quick source of protein,” says Vegan Outreach’s Camp. “Grains, legumes, and vegetables are always going to be better.” But sometimes you just have to have a fake pulled-pork sandwich.