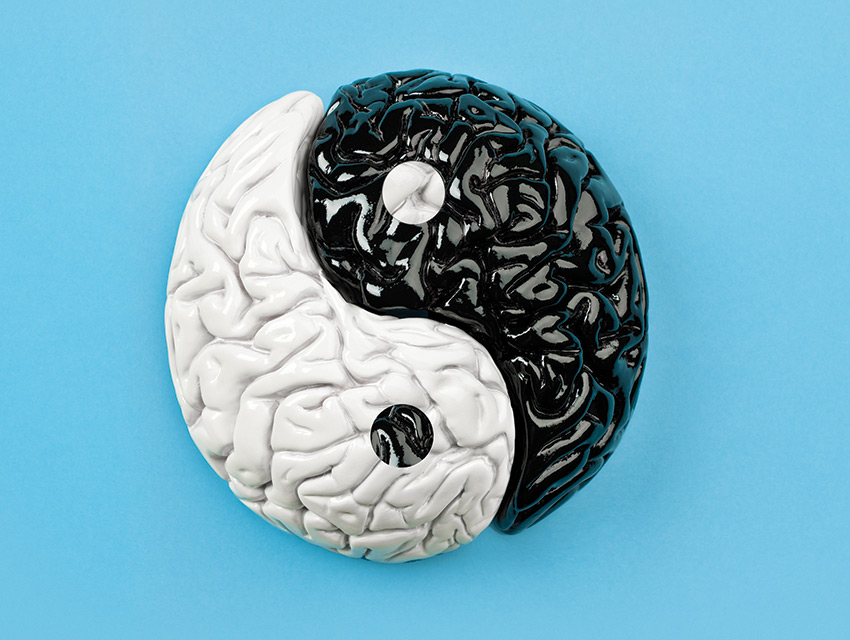 Somewhere between art class and algebra, most of us learn—probably after struggling in one area and excelling in the other—which “side” of our brain is dominant. You are either left brained or right brained. (And if you are in doubt, you can turn to any number of online tests to peg your hemispheric tendencies once and for all.) Left brainers are supposed to be analytical, orderly, mathematical, and good with language. Right brainers tend to be more disorganized, creative, artistic, and visual. A test on BuzzFeed informs me that I’m right brained, though as a science writer, my background would suggest that I draw more from the left. This cognitive shorthand for establishing left- or right-brain dominance doesn’t just aid us in discerning the nature of our talents and shortcomings, it has fueled TED talks, magazine articles, and best-selling books on how to make the most of your alpha side and shore up the weaker one.

Angelenos are always looking for new target areas for self-improvement, but there’s an inherent flaw in treating the two sides of the brain as if they’re biceps. Cognitive development doesn’t work that way. As the neuroscientist whose research helped define split-brain theory in humans will tell you, you’re limiting your potential by trying to fit something as complicated as the brain into two tidy categories.

“There’s a folk psychology that says people have two skills—they’re more verbal or more visual, more artistic or more analytical,” says Michael S. Gazzaniga, director of the SAGE Center for the Study of the Mind at the University of California, Santa Barbara. “But the simple dynamics of ‘the left brain does this, the right brain does that’ are way overdone.” A pioneer in cognitive neuroscience, the 75-year-old professor was one of the first to define right-brain/left-brain processing in humans, at the California Institute of Technology in Pasadena nearly a half century ago. His 26th book, Tales from Both Sides of the Brain, comes out this month. Tall and affable, with a ring of white hair, Gazzaniga sits in the living room of his house near the coast in Carpinteria. “I was trying to tell this idea of split brains and double minds, then the story became a memoir,” he says. The work is itself a split story: part insight into human consciousness and part autobiography. “One of the objectives of the book is for young students to know that science is not this austere, socially isolating profession,” he says. “Scientists like to watch football and drink beer, too.”

While completing his Ph.D. at Caltech in the 1960s, Gazzaniga was hanging out with some of the greatest minds of the 20th century, including the Nobel Prize-winning physicist Richard Feynman and the molecular biologist Max Delbrück. “Oh man, Caltech was some place,” says Gazzaniga. “It had that feeling of  ‘Do not waste your time here, do not waste our time—keep going.’ It was a thrill.”

Gazzaniga did most of his doctorate work under neurobiologist Roger Sperry, who was performing split-brain research on animals. Twenty years earlier, physicians at the University of Rochester in New York State had figured out that severing the corpus callosum, a taut bundle of neural fibers that connects the right and left hemispheres of the brain, could reduce the frequency and severity of epileptic seizures in humans, seemingly without impairing cognitive function. Neurologists concluded that the corpus callosum’s role was purely supportive—like a pair of neuroanatomical suspenders—preventing the two halves of the brain from sagging. But Sperry’s research on monkeys’ brains suggested something quite different. After the two hemispheres were divided, the monkeys’ left hands didn’t seem to know what the right hands were doing. In some ways the animals’ basic brain functions had changed. Gazzaniga wondered if, contrary to the findings in Rochester, a similar, subtler effect could be observed in people. His research into whether split-brain function in humans resulted in cognitive impairment would help Sperry, his mentor, earn the Nobel Prize in 1981 and would also form the foundation of Gazzaniga’s career.

Over many years Gazzaniga worked with hundreds of patients, but it was a 1962 encounter with a World War II veteran that led to one of his biggest breakthroughs. “Patient W.J.,” a former paratrooper, had been having epileptic seizures ever since a German soldier hit him in the head with the butt of his rifle. W.J. was about to undergo split-brain surgery to treat his epilepsy when Gazzaniga sat down with him to chat and try out a neurological test.

A fully functioning brain wouldn’t notice this division of labor, but for W.J., his brain response was different. “What do you see?” Gazzaniga asked him after flashing the image to his left hemisphere.
“A box,” replied W.J. When Gazzaniga showed the same square to W.J.’s right hemisphere and asked the same question, W.J. said he didn’t see anything. After being prompted, he could point to the box but couldn’t describe seeing it. Gazzaniga theorized both hemispheres were processing the image of the box, but only the left hemisphere could articulate what it was. The right side remained mute.

Gazzaniga’s theory was correct. Split-brain surgery really did affect how humans think, as it did animals. That revelation—its confirmation would be years in the making, with the help of an army of collaborators, students, assistants, and even family members—would culminate in the discovery that the corpus callosum was much more than a pair of suspenders. It was a neural pathway enabling the two sides of the brain to communicate, like a superhighway connecting two cities.

The left half may be primarily responsible for logic and language and the right more adept at visual-spatial processing (such as recognizing a face or estimating distance), but the two sides need the corpus callosum to exchange information. Gazzaniga and his student Joseph LeDoux (who would go on to become a key figure in the neuroscience of emotion) later discovered that the left brain serves as the right brain’s “interpreter.” When Gazzaniga instructed one patient’s right brain to wave a hand, the patient’s response was that he must have seen a friend. The left brain didn’t know that the right brain had received instructions, but when perceiving the raw data of behavior (the waving gesture), the left hemisphere created a logical reason (such as seeing a nonexistent friend) to explain the action. The brain relies on both sides to function in equal measure, but that function is beyond our conscious control. Which means you can’t be right brained any more than you can be right lunged or right kidneyed.

So how did a groundbreaking theory on consciousness become a pseudoscientific personality quiz? In 1973, not long after Gazzaniga shared his findings on split-brain processing, The New York Times published an article titled “We Are Left-Brained or Right-Brained” and declared, “Two astonishingly different persons live inside our heads.” Time magazine published a similar story a couple of years later, and misapprehensions endure to this day. Christian Jarrett, a British psychologist and the author of Great Myths of the Brain, believes that we strive to seek out any insight into our intelligence and character, no matter how reductive. “Instead of [using] horoscopes, people can ask, ‘Am I right brained or am I left brained?’ ” he says. “And then they can see if and how it explains their relative strengths. It has the added appeal of seeming neuroscientific, with connotations of being cutting edge and somewhat mysterious.” For Gazzaniga there’s a positive side to the oversimplification of his work: “It gets people thinking about brain and behavior, which is good.”

Even better? Rethinking your life with the understanding that your sense of your abilities and shortcomings is just that—a perception that isn’t necessarily cognitive reality. If you’re bad at math, blame a lousy teacher. Your brain deserves some extra credit.