Home Uncategorized This Land is My Land 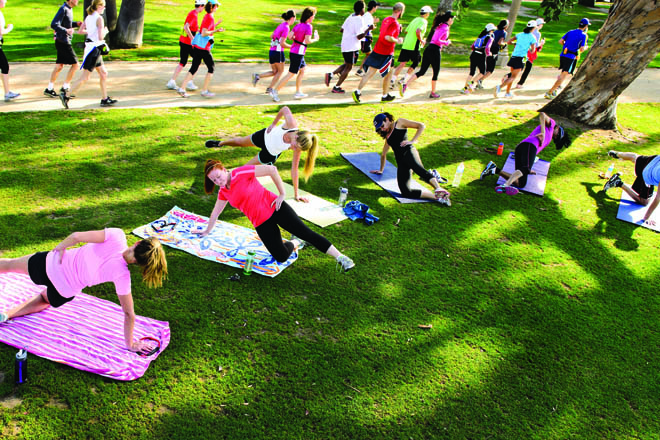 Palm trees. Shimmering sunsets. Lean, tan bodies moving through svanasanas. Perched on the edge of Santa Monica’s sandstone bluffs, with a sweeping view of the ocean, Palisades Park is a Southern California idyll. But lately, what with the yoga mats littering the grass, the TRX straps hanging from trees, and the occasional weight bench and stationary bike parked willy-nilly, the 0.04-square-mile park is anything but a pastoral paradise. “It’s like living in a 24 Hour Fitness,” says Gloria Keeling, 69, who makes her home in an apartment across the street. A personal trainer who specializes in working with seniors, Keeling had been doing her own daily workout in the park for years. But recently, flustered by a group of runners performing circuits on an overcrowded path, she fell, hitting the ground “like a sack of cement” and injuring her knee, neck, and face. “It’s not safe to use the park anymore” she says, noting the marked increase in huge classes lately. “I’m thrilled to see people exercising, but it’s got to be done appropriately. It’s the Wild West out here.”

Outdoor exercise is a given in Los Angeles, where the weather is so relentlessly beautiful, sweating indoors can feel sacrilegious. But across the region, particularly in tiny pocket parks where space is at a premium, there is growing sentiment that fitness fans have gone too far. The conflict stems in part from the popularity of boot camps—high-intensity group workouts modeled after military training—along with similarly styled workouts such as CrossFit and bodyweight training. In each, instructors encourage a back-to-basics approach to getting in shape: lunges, push-ups, suspension training, burpees, and other direct routes to agony. Most camps (which sign up dozens of members for weeks at a time) cost about as much as a monthly gym membership, but of course, don’t come with a gym. Which is either a good or a bad thing, depending on your vantage point.

Research suggests that “green exercise,” or being physically active outdoors, offers more health benefits than the same workout performed indoors. A 2011 study from England’s University of Exeter found that people who exercise outdoors are more inclined to repeat the activity. Another group of researchers from Glasgow University concluded that outdoor physical activity has a greater positive effect on mental health. If you are a trainer, outdoor exercise—particularly large group classes—makes great economic sense. It eliminates the expense of a gym affiliation (or renting space) while simultaneously delivering a persuasive pitch to clients: Get the personal trainer experience for a fraction of the cost! And, according to trainers, outdoor boot camps provide another perk—accountability. Unlike at a gym, someone will notice if you don’t show up.

“The positive energy and attitude are contagious,” says Sonki Hong, a personal trainer who has been teaching classes in Palisades Park for ten years. “You push harder when your friend next to you is giving 100 percent.”

Ask residents who live near exercise-clogged parks—or the city workers who maintain them at taxpayer expense—and they’ll tell you they view group classes differently. “Many of these boot camp companies charge high fees to their clientele and then don’t want to pay anything for the space,” says Kevin Regan, an assistant general manager of the City of Los Angeles Department of Recreation and Parks. “That’s a problem.”

For years any fitness group with paid membership that uses a park within the City of Los Angeles has been required to obtain a permit and, depending on the park and time of day, to pay a small fee. Do most comply? No. But you aren’t hearing a public outcry because boot camps and fitness classes in massive parks like Griffith or Elysian typically don’t cause congestion problems.

Healthy parks are populated parks, after all. Herein lies the paradox of boot camps: Even if they disrupt your romantic picnic or box in your kid’s birthday party, boot camps undeniably draw more people into parks, often in the wee hours, making a morning jog seem safer for all. Teresa Anne Volgenau, a trainer who taught group classes in L.A. for seven years before moving east, says that the red tape she encountered when she tried to get a permit to work in Griffith Park led her to look elsewhere. She discovered Silver Lake’s Bellevue Recreation Center, which had recently been renovated and had a more responsive staff. “I made friends with the groundskeepers, who made sure the sprinklers didn’t come on during my classes,” she says, adding that they welcomed her because her classes made the pocket park seem more inviting. She operated in Bellevue for several years and watched the formerly “gritty,” little-used space transform into a lively gathering spot.

Similarly in 2002, the Latino Urban Forum, a group of activists, architects, and urban planners, organized a grassroots campaign to repave the one and a half miles of sidewalk surrounding Boyle Heights’ Evergreen Cemetery, a popular exercise spot for residents since the 1940s. Again the desire for exercise led to renovation. “The human body wants to be outside—it’s our home,” says urban planner James Rojas, one of the Latino Urban Forum’s founders. “The more we enclose ourselves, the more unnatural we become—we crave constant contact with the environment. The Evergreen Cemetery Jogging Path is an important space that brings people from all generations together.”

In Santa Monica the battle over pocket park usage has prompted regulatory action. In November the city’s Recreation & Parks Commission passed a resolution to ban group fitness classes in Palisades Park and to allow personal trainers access on three conditions only: that they have no more than two clients at a time, acquire a city permit (showing proof of insurance), and pay the city 15 percent of their fees. Trainers, of course, were not happy about this; several of the most prominent banded together to form the Santa Monica Outdoor Fitness Coalition, a group dedicated to what they call “more equitable” regulations. Among their proposals: an option to provide fitness-related community service and lowering the 15 percent use fee, the formation of an Outdoor Health and Fitness Advisory Committee to work with city officials, and deferment of the limitation on class size and equipment in Palisades Park until such a committee is up and running.

“It’s in everyone’s best interest to make sure the park is used in respectful ways,” says coalition founder Erin Dick, who frequents Palisades Park with her boxing trainer. “We agree that there need to be specific regulations for the use of Palisades Park, but this shouldn’t just be about generating revenue for the city.” Over the past several months Phil Brock, chair of Santa Monica’s Recreation & Parks Commission, has been holding meetings with the coalition and is, in his words, “perhaps overcommitted to an ongoing dialogue.” Brock, who keeps photos of the most egregious trainers’ methods on his phone (heavy bikes and benches hauled into the park really gall him), is frustrated by the audacity of some trainers. “There’s one who sets up on the corner of Georgina and Ocean avenues for four to six hours a day, five to six days a week,” he says. “That’s the equivalent of Los Angeles magazine saying, ‘We don’t need our office. Let’s take our staff and occupy the picnic tables in Palisades Park—there’s free Wi-Fi—and set up shop.’ ”

Dick believes that one solution to overcrowding in Palisades Park would be to have the city “deploy” trainers to lesser-used parks, such as Reed, Clover, and Crescent Bay. It’s an idea Brock likes as well. But along with the issue of determining which trainers would be forced to relocate (and which would be allowed to stay), looms this question: What about the homeless, who currently congregate in these parks? If they are displaced by fitness junkies, where will they go? The Santa Monica City Council has repeatedly delayed its vote on the proposed boot camp ban; it seems likely that no matter what, the conversation about Palisades Park will continue. If it does, Rojas, of the Latino Urban Forum, has a suggestion that would please park-loving residents and trainers alike: Make the place bigger. “If overcrowding of the park is a problem, then create more public space,” he says. “Close off Ocean Avenue and extend the park.”