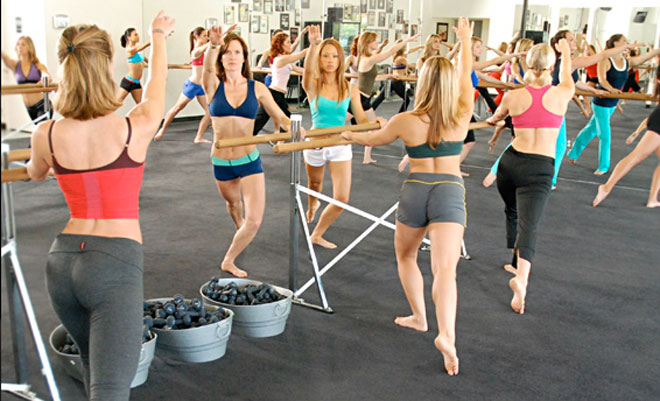 What It Is
➝ A combination of ballet (hence “barre”), Pilates, yoga, and low-impact aerobics, barre workouts are a variation on a regimen that emerged in the 1960s, when German dancer Lotte Berk, looking for a way to gently nurse a back injury, came up with a series of exercises. Early acolytes included Joan Collins and Britt Ekland, which we’d call a stamp of approval. Some of the leg lifts and deep pliés can leave your legs shaking like a Chihuahua’s, but movements can also be so subtle, you’re not sure that much is happening on the outside. It is.

What You Can Expect
➝ Leaner muscles, a sculpted backside, and a defined waistline—such are the promises of the barre. Whether you’re an apple shape, a pear shape, or a russet potato shape with a lumpy, oblong midsection from computer hunch (like me), barre workouts help you stand taller. In four classes, over ten days, I noticed my shoulders were rolled back and my stomach was less of a pillow top. On Sunset Boulevard I even got a “Nice booty!” shout-out—a first.

Where You Should Go
➝ The most popular and widely available barre fitness classes in L.A. are at the Bar Method, Pop Physique, Pure Barre, and Cardio Barre. The studios offer a range of barre training and mat work. Each instructor has his or her own style, but Pop Physique and the Bar Method emphasize leg lifting and Black Swan-meets-Jane Fonda footwork, while Cardio Barre leans more toward lengthening and strength training. Pure Barre goes for the burn, with the wood railing along the mirrors used mostly for support. Don’t forget to bring ankle socks (no shoes here).