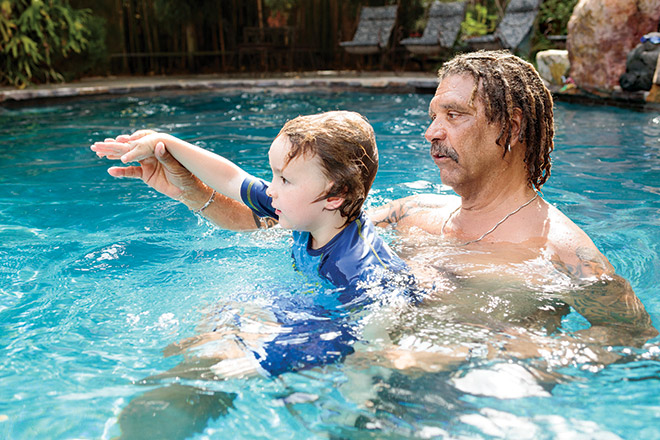 According to Helen Arbogast, the injury prevention coordinator at Children’s Hospital Los Angeles, for every child who drowns there are four hospitalizations for near-drownings, which can result in permanent disabilities such as brain damage. “Older children are less likely to drown because they fight it,” says Arbogast, “but those under five don’t thrash around—it’s a silent killer.” California comes in second in the nation, after Texas, in the number of child deaths from drowning.

A solution—at least a partial one—seems obvious: swim lessons. Perhaps not surprisingly, a mini industry of instructors has sprouted in Southern California, some with waiting lists, some with trademarked nicknames, and each with a distinctive technique. Before choosing an instructor, the first question facing a parent is, When is the appropriate age to begin lessons? In 2010, the American Association of Pediatrics, which had long recommended that only kids ages four and older learn to swim, revised its stance, saying that it was now “more open toward classes for younger children.” New studies show that children ages one to four are less likely to drown if they’ve been taught to swim (findings from the Eunice Kennedy Shriver National Institute of Child Health and Human Development indicated an 88 percent reduction in risk). Although the AAP still maintains that “swimming ability may or may not decrease drowning risk,” its softened position on when children should begin water survival classes in a formal environment has left parents even more confused.

Ask most swim instructors and they’ll answer, the younger the better. Lenny Krayzelburg, an Olympic swimmer and owner of the popular Westside swim academy that bears his name, says that babies under six months are ideal students. “They are still used to the water from being in the womb,” he notes. “It’s a known environment.” Before infants learn to crawl or roll over, they are naturally adept at floating on their backs, which is central to Krayzelburg’s method (he teaches children to roll over to breathe before they learn any strokes). For children younger than three, he offers private weekly classes that last 15 minutes and cost $117 a month (he also holds parent-infant classes for kids under two).

Conrad Cooper says his business, Swim to Me, isn’t about swimming; it’s about confidence. “Swimming is the easy part,” Cooper says. “The hard part is overcoming fear and building trust.” Since 1995, he has taught generations of Southern Californians how to paddle in his backyard pool near Baldwin Hills. His legions of fans refer to him as “the Swim Whisperer.” Cooper starts kids as young as two, and his approach is no-nonsense: He doesn’t use flotation devices or allow goggles because “you need to learn to swim with what you have.” He doesn’t offer private lessons, believing that students learn best with their peers. (Seeing others their age dunk their heads motivates the most apprehensive kids.) The child’s readiness is irrelevant, Cooper says. Children respond to him because he doesn’t give them the option not to. Even if they cry and protest, he keeps coming at them with “You can do this.”

“I haven’t met a child yet that I can’t teach to swim,” he says, though he acknowledges his method could be considered pushy. “Some people might see it that way,” he says with a laugh. “Still, it gets results.”

Building confidence, not just technique, is also paramount to Shahrokh Rezai, the former aquatics director at the Beverly Hills YMCA. “The main lesson is not kicking or strokes. It is psychological,” says Rezai, who’s taught swimming for 40 years. Instead of leading, Rezai follows the child. “As in any new relationship, you must be so careful in the beginning not to do or say something stupid,” he says. His philosophy is to approach all weaknesses with strength. If children fear going underwater, he focuses on proper breathing first, encouraging them to walk around in the water, practicing their breathing until they relax. He places great emphasis on water temperature, timing, and what he calls “invisible teaching”—the little things he does to win children’s trust, like talking to them before a lesson.

For example, when a two-year-old girl wouldn’t even look at him at the start of her first lesson, he took off his watch, which had drawn her gaze, and placed it on the edge of the pool some distance away. The water was shallow, and he wanted her to walk around in it, which she did immediately to retrieve the watch. That girl was my daughter, and watching how hard—and how smartly—Rezai worked to win her trust astonished me.

With so many different techniques and philosophies to consider, finding the swim teacher who meshes best with your kid can feel like signing up for Match.com. Sometimes compatibility is found in unexpected places. In Sherman Oaks, I watch Emily Cohen, founder of the Water Whisperer swim school, lead teacher training sessions. A Brentwood native and former arts educator, Cohen runs a tight ship (she admits she recently dismissed three instructors who weren’t meeting her standards). Each 20-minute private lesson is choreographed seemingly to the second with certain songs and props (toys, puppets, fins) used to teach techniques. Structure and routine are key, Cohen says, from the way children enter the pool to the lollipop they get at lesson’s end.

“Kids like to know what is coming next,” she says, as a two-year-old named Leo laughs, jumps off a diving board into a pool full of adults, and swims underwater to the ladder with an instructor by his side. It’s remarkable to see, but I can’t imagine my reluctant daughter in his place, responding so eagerly to a gaggle of unknown adults. Then again, maybe I’m wrong: Kids are full of surprises.

The most expensive swim lessons aren’t necessarily the best or the best for your kid. Even if kids can swim, more important is knowing that they still aren’t completely safe. They’re just safer. “You can’t be dependent on swimming ability. What if they get a cramp or bump their heads? Parent supervision can’t be replaced,” says Arbogast. She, like the AAP, advocates what’s called the layers-of-protection approach. Along with constant adult monitoring, all pools should be equipped with barriers such as safety fences, alarms, and covers. And both adults and children should take swimming, water safety, and CPR classes.

Rachel Pinto seems to have gotten the message. A Los Feliz resident, she is the mother of a five-year-old girl who resisted taking swim lessons without her. “It’s the only thing I’ve ever made her do,” Pinto says. And though her daughter cried through her first two days of instruction (many kids do), she can now swim solo across their home pool. “I figure we just added a few more seconds for me to get to her should something happen,” Pinto says.