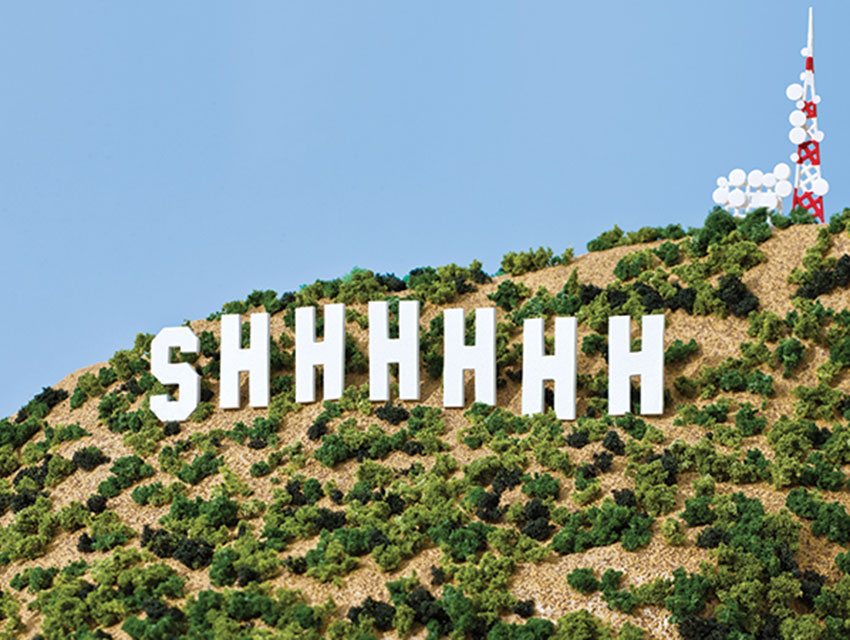 Before we begin, listen for a moment. If you’re reading this in Los Angeles, no doubt something is blaring away out there—sirens, leaf blowers, trucks on the 405, the homesteaders next door and their urban chickens. Let’s not forget helicopters. With the world’s largest municipal airborne police force, the LAPD keeps between 2 and 17 choppers thwacking overhead all day, every day, between 8:30 a.m. and 4:30 a.m.

That’s the paradox of noise in Los Angeles. For all its famous solitude, the city is harder on the ears than people think. Places like New York and San Francisco trump us on sheer volume; density, congestion, and glass verticals have a way with decibels. But sound is not measured by loudness alone. What I noticed when I moved to Santa Monica from Manhattan years ago was how much more jolting noises in L.A. are, in part because they’re isolated. A neighbor’s poodle barks on the Upper East Side and it fades into the tumult. Here you want blood.

Some of our noise comes disguised as the soundtrack to our Southern California dreams. Keeping the driver’s window down is known to cause left-side hearing damage. Popping the top is worse, according to a 2009 British study that found driving a convertible on highways to be as harmful as intense shouting. Don’t ask about riding a Harley (it’s bad, but mainly due to how wind roars inside the helmet, reported the Journal of the Acoustical Society of America).

“We court noise because it’s an element of what makes the urban experience so rich and exhilarating,” says George Prochnik, the soft-spoken author of In Pursuit of Silence: Listening for Meaning in a World of Noise. “The trouble is, the din that attracts us to music clubs or crowded gatherings can also leave us feeling rattled to the core.” I hear that. It takes only 45 decibels of background noise (a little less than a person talking) to begin to hinder the ability to understand speech. Try conducting a meaningful lunch conversation at a sidewalk café on West 3rd Street, say, and you practically have to time your verbal volleys between squealing buses and FedEx trucks. And indoors can be louder. With espresso shots reverberating off the hard surfaces at Sqirl recently, the East Hollywood restaurant registered in the high-90 dBs—or “loud motorcycle”—on my iPhone’s decibel meter app. Yelp lists the place as “average” in its noise ratings, which stands to reason when so many restaurants around the city have become deafeningly loud.

The $6 almond milk latte isn’t the only cost. Both the U.S. Environmental Protection Agency and the World Health Organization link noise pollution to high blood pressure, cardiovascular problems, anxiety, poorer work habits, and lower grades at school. Sleep is where the impact registers most. Research shows that while a degree of habituation occurs with low-decibel interruptions at night—Was that a possum? An earthquake? Whatevs.—we never get used to them completely. Our heart rate spikes and REM falters even if we believe we’re out cold. The brain listens night and day. Researchers studied a New York City school located a couple of hundred feet from an elevated subway track. Every four-and-a-half minutes a train passed by for 30 seconds, at 89 dBs, roughly the level at which sustained exposure causes hearing loss. Student performance in classrooms facing the tracks was as much as 11 months behind that of students whose rooms faced away from the train. Now think of the many L.A. schools you see beside freeways, where decibel levels can easily reach 65 and beyond.

That’s not all: Multiple studies show that when teachers introduce quiet time, students become more productive, empathetic, calm, and agreeable. They feel healthier, too. Researchers at the University of Wisconsin’s School of Medicine and Public Health found that people who quiet the mind and teach it to be less reactive to noise through meditation miss fewer days of work from colds and experience symptoms that are less severe and shorter lived than those who don’t try blocking out mental noise. In a Swedish study, residents of a noisy neighborhood reported 50 percent less irritability and anxiety when their apartment was located on the quiet side of the building.

I know. If quiet is what I crave, I could go to Ojai or Joshua Tree or perhaps Yosemite, where the National Park Service has banned drones to stop idiots—I mean, amateur photographers—from harassing nesting peregrine falcons with noisy unmanned aircraft. But I wanted to find the answer closer to home. For much of the past year I’ve dedicated myself to escaping L.A.’s clamor by seeking out pockets of peace. I’m sound sensitive, sure, but not to a degree that I’m walking around with earplugs. Really, my goal has been to see what I’ve been missing: serious quiet. There’ve been visits to the Huntington Library in San Marino, the Self-Realization Fellowship in Pacific Palisades, and Glendale’s Forest Lawn Memorial Park (the dead—now they sleep soundly).

One morning last spring I met with Sister Mary Pia, an 81-year-old Dominican nun who, since 1950, has lived cloistered behind stucco walls at the Monastery of the Angels in the Hollywood Hills. She spoke to me through metal bars in a visitors’ room and came across as a woman who radiates serenity and bliss. The sisters—16 reside there full-time—speak only when necessary and then only briefly and in hushed voices. “For us,” she said, “being quiet is the way to know God, to know ourselves, and to understand the needs of others. Profound silence nourishes everything.”

Inspired to go deeper, I spent two nights at the Serra Retreat in Malibu. Run by the Order of Franciscans, the Spanish-tiled monastery on a hillside overlooking the Pacific has no formal program of silence but gives private retreatants the opportunity to stay mum in clean, spartan surroundings for $130 a night, meals included. Without uttering a word those three days, I kept a journal, read, sketched eucalyptus trees, meditated, walked the labyrinth, and listened to breezes and birds. Silence creates space to try things (as does going offline for a couple of nights), and I noticed how much more attention I paid to making the bed and tasting every morsel of food. Insights flitted around me like fireflies. “Do a secret mission of kindness once a day,” I wrote in a list of promises to myself. “Let go of old resentments. Listen to others with focus and openness.”

Not speaking was challenging, but it was also magnificently peaceful—until it wasn’t. Serra’s walls are paper thin; the cleaning crew clatters in at 6:30 a.m., and by 7 the thrum of construction and delivery trucks drifts up from the zillion-dollar horse ranches below. I liked the noises more than I expected, honestly. I came in thinking of them as assaults. When I was leaving, they just sounded like reality.

The entire populace could give up talking and switch over to whisper-quiet electric cars, and we’d still have the clamor from on high to deal with. Name a local airport and you can bet the residents in its flight path have suffered from (and protested) the roar of its planes. Bright Star Secondary Charter Academy, an LAUSD high school, is so close to the runways at LAX that during a visit, while standing on the blacktop as a Qantas Airbus A380 flew past, I could almost high-five the pilot.

The rancor over helicopters has reached such a pitch that a measure tacked onto a $1 trillion federal spending bill last January forced the Federal Aviation Administration to write regulations to mitigate the window-rattling thunder of L.A.’s low-flying helicopters, which can be almost as loud as a New York Metro train—87 dBs—from 500 feet away. But there’s more than engine noise alone: The oscillating vibrations of the rotor blades make the aircraft seem ten decibels louder than they are; our canyons and valleys only augment the din.

Following my stay at Serra, I called a friend, Diana Winston. Before becoming director of mindfulness education at UCLA’s Mindful Awareness Research Center, she spent a year on silent retreat in Myanmar as a Buddhist nun. I wanted to know how she handles the racket of L.A. Her answer surprised me. “Instead of running from the noise, I embrace it,” Winston said. “I use sound as part of meditation. It’s a very alive way to practice. Listening to sounds coming and going instead of focusing on breath means that sound becomes the main meditation object. A passing bus or airplane is just as effective as a mantra or an exhale.”

I’ve been applying that technique ever since. As much as possible I reframe the noise of L.A., the car alarms, the barker nearby, those early-morning trash pickups. I let their vibrations rise and fall and use them as reminders of what lured me to this city in the first place: the excitement, the energy, the population, the buzz. So far it’s been working fine. But every so often a helicopter shatters the stillness, coming a little too close and with way too much rotor, and I understand exactly how those peregrine falcons must have felt.

The Noisy Streets of L.A. May Be Killing You

Ask Chris: Who Put the Brakes on Drag Racing in Long Beach and San Fernando? Was It Too Dangerous?