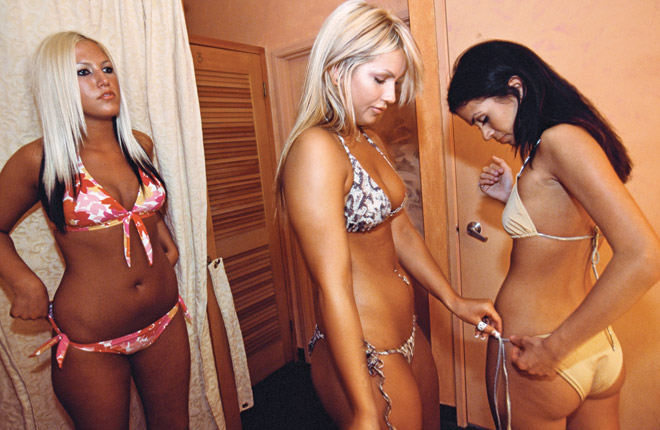 Tans are stories, and now that I have one, I need to decide what story I want mine to tell. Yes, I’ve just had my first-ever spray tan, and it’s making me nervous. In the car I worry whether my seat belt is leaving a line across my shoulder, whether the back of my knees are rubbing off on the upholstery, and whether my face is too dark. But amid all of this anxiety I keep staring at my left arm, rotating it as if it’s on a spit. It looks more elongated and toned than it did before. What’s that about?

As I get closer to home it occurs to me that I might be the only person in Silver Lake with a spray tan who is not on TV. Pale hipsters are everywhere, all dark hair and transparent skin. Here I am, blond and getting browner (and more self-conscious) by the minute. I stop at a nearby nursery and commit to my tan story: I am this bronzed because of all the time I spend organic gardening.

Immediately people who know me notice something, but they’re not sure what. “You look great. What are you doing?” asks a friend I meet for breakfast the morning after. Another pal thinks I’m thinner. On Day Two I up the ante and wear a sleeveless romper that I’d shoved to the back of my closet. “You really do look toned,” my husband says, befuddled. On Day Three the compliments continue, and I get hit on twice. By strangers. No wonder people do this, I think. The small part of my brain that is yelling “What’s in this stuff?!” is hard to hear over the din of my self-love.

Gone are the days of bad Oompa-Loompa orange fake tans; after more than 25 years of trial and error, the sunless tanning industry (which is on track to bring in $758 million a year by 2015) has finally figured out how to achieve a closer approximation of the real thing. The key is in lowering the percentage of the active ingredient—dihydroxyacetone, or DHA—a substance (basically a color additive) derived from sugarcane and beets that, when applied to skin, reacts with amino acids and produces browning. Analogies used to describe this process include the browning of a steak, the development of crust on bread, and the oxidation of an apple. None of these is exactly accurate, but the apple analogy best represents what happens once DHA meets your skin: browning without heat, the color deepening for two to four hours, or with an especially high concentration of DHA, continuing to darken for up to 24. (The higher the concentration, the darker the tan and the higher the possibility of its looking fake.) Ten years ago DHA made up as much as 20 percent of a spray tan solution; today most tanners use mixes of 8 to 12 percent.

As the products have evolved, so have the methods of application. There are the at-home, DIY bronzing creams, lotions, and aerosol sprays, which are a burgeoning part of the business. And there are Mystic-style spray-tanning booths, which hit users with an automatically dispensed coat of color from head to toe. But even if the color comes out right, there are frequently telltale signs the glow is faux: all-over unevenness, darker shading on the palms and feet, and streaks. While naturalness is the main goal, evenness is the one that is harder to attain, which is why the more expensive airbrush application—done by hand and costing from $60 (booth tans) to $350 (top-of-the-line airbrush tans)—has taken off. “Uneven skin tone looks blocky and like you are out of shape,” says “celebrity tanner” Jimmy Coco, who first got into spray tanning as a Chippendales dancer. Custom spray tanning, like makeup, hides the skin’s imperfections, and when applied with finesse, can add contour where there isn’t any, making legs appear more lithe or abs more defined.

“I’ve gotten a lot of people out of the spray booths,” says Tanya Pongrac of Bronzed Bella, a mobile tanning service based in L.A. and Phoenix. I spent an afternoon watching Pongrac assemble her pop-up tent in a client’s bedroom and spray her with a secret recipe. Like most custom spray tanners, she advocates a light touch. “You could do another coat,” she tells the client, “but I wouldn’t.”

The superiority of airbrushed spray tans isn’t just aesthetic. Dr. Jessica Wu, a dermatologist and professor at USC, believes that a custom spray tan is also the safest way to glow. “I get them if I’m going to a special event or a party where I’m wearing something that shows my legs,” she says. As for other fake-bake options, she endorses self-tanning creams and bronzers but not tanning beds, which she calls “cancer boxes.” Indeed, according to a study conducted by the International Prevention Research Institute, a single session in a tanning bed increases the risk by 20 percent of being diagnosed with melanoma in one’s lifetime. Today many tanning salons, like my local one, offer the options of an airbrushed spray tan or time in a tanning bed—an incongruity on par with a restaurant offering its patrons a kale salad or a pack of cigarettes.

Though approved by the Food and Drug Administration for external use in the 1970s, DHA has prompted other health concerns. A 2012 investigation by ABC News revealed that airborne DHA had a mutagenic effect on cells and organisms in several scientific studies. Due to lack of evidence, the FDA has not approved DHA for spray tans (nevertheless it makes up as much as 12 percent of the spray tan solution). And while it was previously thought that DHA acts only on the surface layer of the skin composed of dead cells, new research shows that about 0.5 percent of the DHA from a spray tan likely penetrates the top layer of skin.

For most people, including many in the medical community, that number seems too small to merit concern, especially given the proven dangers of exposure to ultraviolet rays. But as Dr. Wu advises, precautions should be taken not to inhale the spray or to allow it to enter mucous membranes. Unlike the skin, the lungs don’t have protective layers. Wu suggests avoiding the face and ears, or wearing protective garb like nose filters and eye shields. The real danger, it would seem, is not for people receiving occasional spray tans or for the top tier of mobile tanners who can control environmental conditions, but for salon and spa technicians who might be inhaling DHA all day long.

How to tan safely is not the only conundrum. Spray tans can’t supply something the sun can: vitamin D, which many of us don’t get enough of. A 2009 survey by the Centers for Disease Control suggests that as many as three-quarters of adults and teenagers in the United States are deficient, perhaps in part because we avoid the sun. “We don’t know what amount of sun is safe to get—if you’re someone with a history of melanoma, I’d say none and get your vitamin D through a supplement,” says Dr. Wu.

I’m vitamin D deficient, most likely because three years ago, after the birth of my first child, I declared it the summer of the caftan, and I’ve stuck to my pronouncement for reasons of both vanity and sun protection. Though I spend a week at the beach with my family every summer, I do so while donning what is basically a burka, the few visible parts of my skin slathered in SPF 50 or above. I’m not the black sheep of the family; I’m the pale, pasty sheep. When people stick their arms out to compare suntans, no one ever asks me to participate.

But not anymore, not after I pay a visit to Fiona Locke, a Santa Monica-based airbrush specialist who refers to her work as “skin finishing” rather than tanning because “it’s more about adding a healthy glow that looks like it’s your own.” A fair-skinned Irishwoman, Locke specializes in barely-there color (Amy Poehler, Kelly Osborne, and Olivia Wilde are clients). Inside Locke’s studio I disrobe, leaving my skivvies on not for modesty but for contrast—I want a tan line so I can see the difference. First Locke directs me to stand on a pair of cutout stickers shaped like footprints to prevent the solution from darkening my soles. Then I march into the St. Tropez “extraction booth,” a three-sided affair that is more presentation board for a science fair project than actual furniture. Locke’s airbrush is attached to what looks like a small Miele vacuum cleaner.

The spray is so light that I can hardly tell she’s applying it: I expected a freezing, smelly blast of solution. Instead the odor is minimal, much less noxious than at a nail salon. Locke gently directs me to move this way and that. I hold my arms up like a sad robot for a while and then step one leg forward, one leg back so she can bronze my inner thighs. When it’s time to mist my face and neck, she has me close my eyes and hold my breath. She sprays one side at a time, slowly, letting me know when it’s safe to breathe.

After she’s done, Locke holds my hands delicately, wiping residual spray off my nails. She removes the stickers from my feet and sends me to a mirror. In ten minutes I have acquired the darkest tan I’ve ever had.

Like any service that demands nakedness, tanning is an intimate business. “You are all up in people’s junk,” says Pongrac, “and people open up—it sometimes feels like I’m their therapist.” It’s true. During my time with Locke, I can’t seem to stop talking, giving a running inventory of my flaws: my stretch marks, my spider veins, my sun spots, and that scar from a skateboard accident at 17. By session’s end I’m embarrassed by both the psychological and corporeal exposure.

I forget all that, of course, when I encounter my first flirty stranger. But then, on Day Three, I notice dark pools on my kneecaps where dead skin cells seem to have soaked up more solution than the rest of my legs. It’s not a major snafu, like the time a client of Coco’s came to him “striped like a zebra” after a visit to another tanner and Coco had to spend an hour coloring between the lines. (FYI: Soaking in a hot tub or taking a ketchup bath will remove a bad spray tan.) But sloughing off the dry skin on my kneecaps every morning in the shower so I can appear “even” serves as a keen reminder of how quickly we shed skin cells (between 30,000 and 40,000 every minute).

After more than a week (spray tans last five to ten days), I’m a bit less radiant. I’ve had fun, extending my limbs for all to admire, wearing shorts—heck, even taking friends to the bathroom to see my tan line. As I return to paleness, though, I find myself embracing how oddly sweet my skin’s flaws are—my record, in a sense, of a life well lived. I won’t lie: It was nice to get temporary respite, camouflage for my scars and scuffs. We all have issues with our bodies, and tanning my skin helped lighten up some of mine. Will I do it again? Maybe. But without a really good reason, like a sudden red carpet invite, it’s a stunt I’m not planning to repeat.