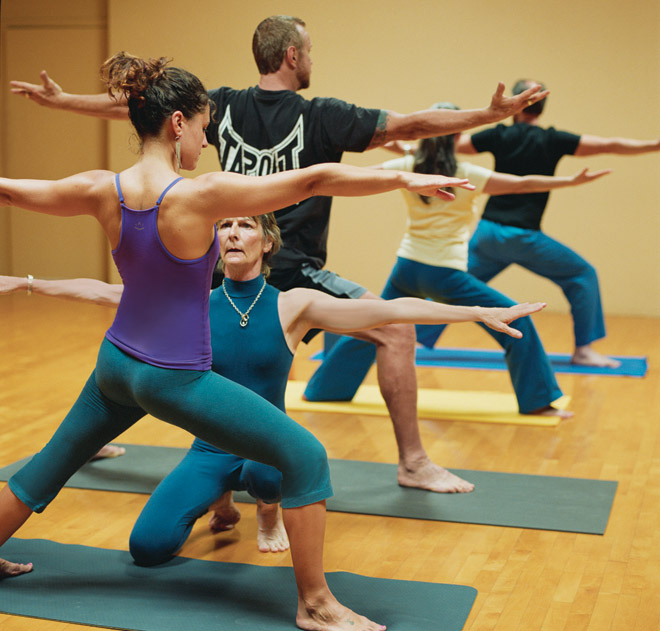 “Is there anything going on in anyone’s body that I need to know about?” Arms shoot up in the afternoon class Jasmine Lieb teaches at YogaWorks. What follows at the Santa Monica studio is a five- to ten-minute discussion that sometimes resembles an emergency room intake session. While it’s not unusual for yoga instructors to ask students if they have any issues in their bodies that day, the information is typically used to help the afflicted modify certain moves the class will be performing. In the case of Lieb’s class, the information will dictate how everyone will move for the next 90 minutes.

The 40 or so students assembled here are practicing yoga therapy, a discipline intended to address physical injuries, health concerns, and even emotional challenges.

But in some ways it’s easier to explain what yoga therapy isn’t than what it is. It’s not so-called power yoga, flow yoga, hot yoga, or any of the other types that aim to drench students in sweat, liberate them of 400 calories, provide Gumby-like pliability, or create washboard abs. This is not the class for those aspiring to stand on their heads in the middle of the room, either, though it’s precisely the place where some headstanders with crunched vertebrae wind up. “I took class after class, and I would balance on my head and try to do big back bends,” Westchester yoga teacher Tiffany Reason told me of her initial yoga experience. “By nighttime my lower back would be worse instead of better.” But in Lieb’s yoga therapy classes Reason felt as though she had found “real yoga.” She went on to become an apprentice of Lieb’s and now teaches her method.

During the discussion at the start of class, Lieb asks students to describe their pain (“Achy or sharp?” and “Does it radiate out or stay in one spot?”), and she follows up with anatomical questions (“Is it the L4 or L5 vertebra?”) to gain a better understanding of what’s happening in their bodies and minds. One afternoon in Santa Monica a muscular guy in his thirties describes hip pain that’s exacerbated when he sits on his surfboard. A fortysomething woman says her sciatica has been acting up ever since a workout on the Culver City stairs. A young mother tells how a fall from her bike left her with a sore tailbone. I’ve shown up with what I call driver’s hip. A stiffness and soreness deep in my right hip joint occasionally jolt me awake at night, the muscles having been antagonized by how I pump my gas and brake pedals when battling L.A. traffic.

Lieb guides us collectively through a series of movements that in one way or another address each of the issues raised by students. When the ailments are particularly disparate, Lieb might tackle them in succession, starting with a move to release the hip muscles, say, then segueing into a pose that continues to work the hips while targeting the shoulders and neck.

Lieb, who is 60 years old with spiky blond hair and a British accent softened by 34 years of living in Venice, was an early practitioner of yoga therapy. She began training to teach the style in Los Angeles in 1980 before joining YogaWorks not long after its opening in 1987. Soon after, she developed a yoga therapy program for senior citizens at Santa Monica College’s Emeritus College, and she became one of the first members of the International Association of Yoga Therapists (IAYT). In the 1990s, she taught her method to patients in the offices of doctors, acupuncturists, and chiropractors as well as at the Sports Medicine Institute of Los Angeles.

According to the IAYT, Los Angeles is home to more than 80 yoga therapists and six schools (one of them headed by Lieb) that train yoga therapy teachers. Many yoga therapists work with students one-on-one in clinical settings that resemble physical therapy offices. The difference is that where physical therapy helps patients’ bodies recover, yoga therapy “does that, plus,” says Helen Lavretsky, M.D., a professor at UCLA’s Semel Institute for Neuroscience and Human Behavior. “It allows you to learn tools that put you in charge of your psychological reactions to the injury—the stress-producing reactions. People get anxious. Their minds suffer, too,” she says, adding that yoga therapy students tend to feel empowered. “It teaches you tools for when you’re gone from the therapeutic environment. You’re all of a sudden in charge of your own recovery.”

Yoga was introduced to Los Angeles in the 1940s when a teacher by the name of Indra Devi opened a yoga studio in Hollywood, seeking to lead the way to physical, emotional, and spiritual balance. It was an inherently therapeutic style of yoga that counted Greta Garbo, Gloria Swanson, and Marilyn Monroe among its most famous early adopters. By the late 1970s, when Lieb received training from Devi, L.A. had become well established as an epicenter of yoga. Now 20.4 million Americans practice yoga, according to a 2012 study commissioned by Yoga Journal, with courses being taught everywhere from gyms to boot camp-style retreats.

However, the iterations of yoga geared toward the masses aren’t necessarily faithful to tradition. According to Lavretsky, who’s also a member of the American Board of Holistic and Integrative Medicine and a certified yoga instructor, these styles represent “an artificial Americanization of yoga.” The competitive edge they introduce has contributed to an increase in yoga injuries. “Yoga is about you, your own path, your own development,” she says. “You don’t compete with one another.” At least, you’re not supposed to.

Despite the many studies—including several by Harvard Medical School researchers—showing the health benefits of yoga, doctors tend to be unaware of yoga therapy. “We need more research and more standardization of training before anybody believes it,” Lavretsky says. The IAYT has developed accreditation standards for its member schools, which could eventually lead to physicians writing yoga prescriptions that are covered by health insurance, as physical therapy is.

One thing that sets Lieb’s style apart is her ability to provide individual attention in a group setting. The IAYT’s teaching guidelines recommend that yoga therapists study anatomy and basic physiology and be versed in the terminology of modern health care, but Lieb also integrates shared aspects of craniosacral therapy and Oriental medicine, including reflexology and what’s known as zone therapy.

Injuries mostly occur, Lieb believes, when we’re distracted or making unhealthy choices, whether emotional or physical. “The term yoga means balance,” she explained to me on a recent afternoon as we sat in the living room of her cozy bungalow sipping lemon-infused water. “So when you’re injured, it means there’s a lack of balance.” If that seems like a theory most yogis subscribe to, surprisingly it’s not. “The majority of the people on the planet most likely think yoga is physical exercise, but that’s not all it is,” she said.

This September Lieb launched one of the most comprehensive programs of its kind in the country: A two-year, 1,000-hour yoga therapy curriculum, “liv-INg yoga with jasmine lieb” is based in a Westchester studio and expands on the courses she leads at YogaWorks (including at the Westwood branch) and Santa Monica College. A key principle of everything she teaches is to break unhealthy patterns of movement and establish healthy ones. “Your body wasn’t meant to sit at a desk or drive on the 405,” she often reminds the class. “It was designed to stand up and run long distances.” By deconstructing traditional yoga poses and guiding us through them in a slow, methodical way, she helps us release the tensions in overworked muscles and retrain them. For instance, a hip-opening pose unwinds the clenched muscles in my driver’s hip, followed by a bridge pose to stabilize my pelvis and gently move it from a sitting to a standing position. It’s knowledge that I—and everyone else in class—can take away each time we get in the car and drive back onto the streets of L.A.