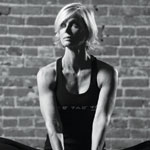 Your business developed out of a series of setbacks?
I had a climbing accident that put me out of commission, and I lost my job as COO of a vitamin company. When I was rehabbing, I would go from a yoga class on one side of town to a spin class on the other. I was very frustrated. I thought, “Why doesn’t someone put this together and open up a yoga and spinning studio?” We launched in August of 2001, right before 9/11.

You’ve put your own twist on yoga.
I wanted a place where athletes would feel comfortable and not get injured. It’s a more accessible yoga. The poses are a power flow, but they’re a very safe sequence. I got blasted by the yoga community when I first did it because it wasn’t “real yoga.” But in 11 years we haven’t hurt anybody.

How do injuries occur?
People think that if they’re not going harder and faster, they’re not progressing. We see this a lot with yoga: They want to twist themselves into a pretzel. You don’t need to do that. You can stay at a certain level and get your workout without hurting yourself.

Whom do you look up to?
Businesspeople like Martha Stewart, because she came from the corporate world and started her business in her forties.