Home Uncategorized Your Commute May Be Hazardous to Your Health 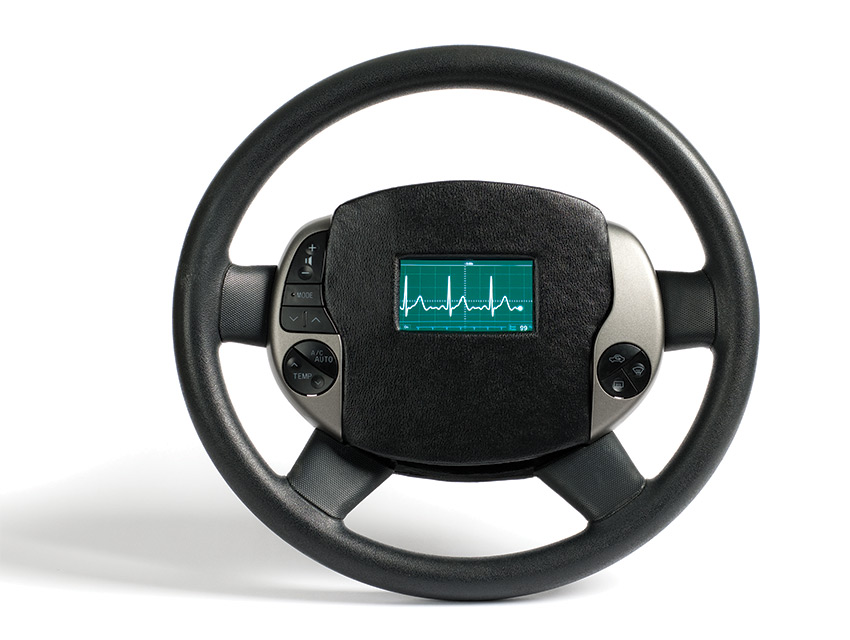 I’ve been having a recurring dream. I’m driving down the 405 from Santa Monica to Irvine as traffic speeds up, slows down, or stops entirely, and I’m always in danger of being late. Then I wake up—and it’s time to make the trip for real. About six months ago the company I work for, which had offices in Orange County and Beverly Hills, decided to consolidate into a single Irvine location. I had a choice: Give up a job I like or drive 100 miles a day in unpredictable traffic. I chose the latter and joined the hundreds of thousands of L.A.-area “mega-commuters,” as researchers call those of us who put in at least three hours a day going to and from our jobs.

But we all know that in our car-clogged metropolis, you don’t need to travel far to have a difficult commute. According to a recent report from the nonprofit transportation research group INRIX, Angelenos lose 64 hours per year due to traffic congestion. The thing is, a commute that steals time from your day could also be shaving years off your life expectancy. The list of side effects reads almost like the warning label on a cigarette package, but while avoiding the commute may be impossible, you can minimize the damage it’s doing to your body.

For starters, the air in your car is riddled with tiny particles that irritate the lungs and are linked to high blood pressure, heart disease, asthma, and cancer (which is thought to explain the high cancer rates among residents living along the 710 freeway). Freeway pollution could also lead to cognitive problems, a 2011 USC study found. When mice were exposed to freeway levels of particulate matter for ten weeks, they experienced damage to neurons responsible for learning and memory as well as inflammation associated with brain aging and Alzheimer’s disease. They were subjected to pollution for 15 hours a week—not an unimaginable duration for a human who lives in Pasadena and works in Silicon Beach.

Changing your car’s cabin air filter and driving with the windows up (and the AC on recirculate) can cut down on the pollution but not on the strain you experience when stuck in a sea of cars, worried about the time or feeling trapped. Of drivers in urban areas in the country, L.A.’s are the most likely to be stressed out by stop-and-go congestion, according to a 2009 survey titled “Commuter Pain.” “It’s not a healthy response, but it’s understandable when you’re dealing with horrendous traffic,” says Diana Winston, director of mindfulness education at UCLA, who leads programs in meditation and other relaxation techniques. All that stress elevates hormones such as cortisol and adrenaline, which are tied to poor cardiovascular health, says cardiologist Karol E. Watson, director of UCLA’s Cholesterol Management Center, who is studying residents of Venice and San Bernardino. It’s worse for women because stress and anxiety are harder on their hearts, she explains.

Other research has linked the duress of driving to diabetes, depression, high blood pressure, reduced sleep quality, and poorer job performance—as well as to a higher risk of accidents. At the same time your lifestyle goes downhill (surprise!): Researchers at UCLA and Cal State Long Beach have found evidence that greater time in the car means less time, say, jogging around the Silver Lake Reservoir and a greater likelihood of relying on “nongrocery” foods (like those KFC meals that fit in your cup holder)—which ups your odds of becoming obese.

There’s all the personal fallout that comes with the daily drive, too. Every minute added to your commute makes you slightly less happy and more anxious, according to a report by British psychologists published earlier this year. The worse your evening trek home, the more negative your mood will be that night, says Raymond Novaco, professor of psychology and social behavior at UC Irvine. Bump the drive to more than 45 minutes each way, and you’re 40 percent more likely to get divorced, based on findings from a 2011 Swedish study.

Before becoming a professor at Cal State Northridge, Shannon (she requested anonymity for privacy) slogged five to six hours each day between the mountain town of Forest Falls and her job in downtown L.A. “My husband didn’t want to move to an urban center,” she says. “It was a major stress.” Within a year she was suffering from health problems ranging from sciatica to an exacerbated autoimmune condition. “It wasn’t sustainable,” she says. “I’m a really Zen person, but sitting in bumper-to-bumper traffic for hours takes a toll.” The drive wasn’t the only reason her marriage ended, but it did contribute, says Shannon, who moved closer to work and now puts in a “manageable” 40 minutes each way.

Shannon’s drive is still worse than the norm, and the norm is pretty bad: The typical Angeleno spends about an hour a day commuting—either the worst average in the nation or only the sixth worst, depending on which statistics you believe (New York City, Washington, D.C., Chicago, Atlanta, and Boston are right up there). But workers who live in a distant suburb like Palmdale commute 40.4 minutes. Freeway “improvements” aren’t necessarily making things better, either: The rush hour drive time on the 405 between West L.A. and the San Fernando Valley actually increased, from 34.5 minutes to 35.5 minutes, after the long-awaited car pool lane was added.

Just seeing the line of back-to-back taillights crawling through the Sepulveda Pass, it’s tempting to click on one of those ads that tell how Aunt Dotty rakes in $7,500 a month working at home. To that end, the city has been encouraging the development of transportation nodes like the cluster of apartments that have sprung up around the Purple Line station at Wilshire and Vermont. It’s a bold move in Southern California, where people have long valued the square footage of their dwelling more than the time it takes to get there. “People move inland because the relative affordability is 40 to 50 percent higher than in L.A.,” says Jordan Levine, director of economic research at the local consulting firm Beacon Economics.

“But they work in the coastal areas because there are higher wage opportunities.” To many people, he says, the difference between home prices in outlying areas and salaries in L.A. makes the commute seemingly worth it. What they’re not calculating is the reduction in health and happiness.

For proponents of creating a density-oriented L.A., mass transit is key. The commute duration isn’t always shorter, but people who skip the drive start using that time for things like reading, catching up on work, or just spacing out. Then again, many Angelenos view rail as a limited option and the bus as a time drain. In fact, L.A. ranked third in a 2014 University of Minnesota report on the number of jobs accessible by public transit, yet only about 10 percent of us commute that way.

So if you can’t or won’t change your mode of transportation, at least you can alter your outlook. “There’s a subjective element to how much a commute bothers you,” Novaco says. You don’t want to be one of Those Drivers who stew in their seats, weaving in and out of lanes in search of an advantage. (It’s an illusion, anyway: The next lane over often seems to be going faster when it’s not, research has shown.) “Of course you can’t meditate when you’re driving, but there are things you can do to keep calmer,” says UCLA’s Winston. Watch for signs of anxiety, such as clutching the steering wheel tightly, clenching your stomach, or cursing at drivers. “Take a few breaths, notice how your body [is feeling], and bring yourself into the present moment,” Winston advises. “Tell yourself there’s nothing you can do about traffic, so you can stop worrying about whether you’ll get there in time.” Cultivate positive emotions by sending kind thoughts to yourself or even to the guy in the BMW who cut you off. “Thoughts of being peaceful and at ease help train the brain in that direction,” she adds. “All the science points to the fact that the more relaxed you are, while remaining alert, the better driver you’re going to be.”

Listening to music, audio books, or the soothing voices of NPR reporters can also ease the mood, suggests Watson, who helps mitigate the damage of her own hour-long commute between the South Bay and Westwood by exercising at home and using a standing desk at work. Apps like Waze or Google Maps may help, too, providing a sense of control. “More route choice is one factor that reduces stress,” Novaco says. And by having an estimation of the drive time, despite another fund-raising visit from President Obama, you can let go of the uncertainty about when you’ll be home.

I’m learning to live with my own commute. Unlike the more than two-thirds of Angelenos who go it alone, I carpool with a coworker most days—which offers companionship, regular breaks from driving, and the time savings that come with the diamond lane. And I telecommute one day a week from home. For now it’s the best I can do. An L.A. in which most of us reside close to our jobs—or walk, bike, or take public transportation to work—is still a faraway dream.

Editor’s Note: Buckle Up and Start Your Engines