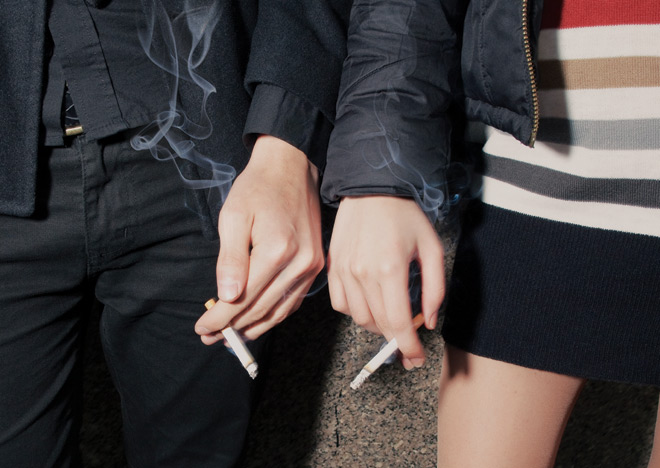 The brunet thirty-something actress is the picture of health: trim, toned, skin glowing, with nary a wrinkle in sight. She eats light—mostly vegetables and lean proteins—and shops organic. Most days, between auditions, she takes a four-mile hike in Griffith Park, followed by yoga and stretches. But postworkout she also sometimes sneaks her favorite “reward”: a Parliament Ultra Lights cigarette. “I do everything right,” says this woman, whom you’d recognize from TV sitcoms. “But then there might be a day where you get ‘no’s’ all day long and it’s like, I’m having a smoke. It feels good to be bad.”

Everyone knows smoking will kill you, which is why in Los Angeles today, thanks to tobacco control measures that range from restaurant bans to taxes, it’s harder and more expensive to light up than it used to be. Despite that, a determined cadre continues to inhale while taking pains to hide the habit. These are L.A.’s secret smokers. You’ll find them at least ten feet away (that’s the law) from the entrance to your local bistro, huddled near the decorative hedges, puffing between courses. You’ll spot them at the playground—the parents who hang back, crumpled cigarette pack in hand, as their toddlers tricycle on ahead. You’ll even run into them at the Oscars, where so many actors indulge that there is a designated smoking balcony where cameras are verboten. You’ll know secret smokers by their telltale hand washing (compulsive), Altoids consumption (incessant), and Febreze spraying (if there’s deodorizer in the glove compartment, look no further).

“Whenever we are sneaking around, we are experiencing shame,” says Kerry Gaynor, a Santa Monica-based hypnotherapist who helps clients stop smoking by making them confront the life-shortening consequences. “We feel so bad about ourselves that we keep up our addictions as a way of expressing how bad we feel.”

So goes one theory. Another is that certain folks just like to smoke—they enjoy the buzz, the appetite suppression, the patina of cool they think it lends them. Sneaking a cigarette is not so much a mini rebellion but a cat-and-mouse game with L.A.’s health-conscious masses. Eat kale and do enough yoga, secret smokers claim, and an occasional Camel shouldn’t be a problem—as long as it’s puffed on in private.

That helps explain why—despite the proliferation these days of paparazzi photos showing movie stars with no makeup, with no shoes, with no dignity—you rarely see images of A-listers smoking. (Mad Men doesn’t count; series creator Matthew Weiner is on record as saying all those cigarettes wielded by his cast are herbal.) Don’t be fooled. Many actors are indulging their addiction behind closed doors or on closed sets.

Such behavior, says Gaynor, suggests classic denial. “There’s a big difference between saying ‘Cigarettes are going to kill me’ and actually feeling terrified at a given moment that the cigarette you’re smoking is going to put you in the hospital,” he says. But of course one day it may.

While less than 11 percent of adults in L.A. County smoke—one of the lowest rates of any major city—intermittent smoking is on the rise. Surveys show that the number of nondaily smokers in the United States rose 40 percent between 1996 and 2001, and today about one in four smokers don’t smoke every day. Though it is undeniably better to smoke 20 cigarettes per week than per day, the intermittent smoker—or “chipper”—is not safe from nicotine’s effects, says Dr. Jonathan E. Fielding, director of L.A. County’s Department of Public Health. “There’s no threshold of safety,” he says. “Even people who only smoke a few cigarettes a day have higher rates of heart disease and lung problems.”

Because smokers must battle not just nicotine addiction but also the psychological attachments that accompany the habit, it can be doubly difficult to quit (most people fail). Along with nicotine replacements, which include patches, gum, lozenges, and the prescription-only medications Zyban and Chantix, most experts recommend counseling over attempts to go cold turkey. There’s also the electronic cigarette, or e-cigarette, which though it lacks FDA approval and can’t be marketed as a smoking-cessation device, is an increasingly common choice for would-be quitters (8 percent tried it in 2012, making it the second-most-popular cessation method after abstinence). The e-cigarette vaporizes a liquid solution into an aerosol mist and lets the user choose how much nicotine is released, simulating smoking without creating smoke. Recent ads for one brand, blu, feature the actor Stephen Dorff looking scruffy-handsome in a denim shirt and two-day beard, slipping a pack into his breast pocket. Not since Tom Selleck hawked Salems has such star power advocated nicotine.

Then there are holistic approaches like those of Gaynor, who has been in private practice for more than 30 years and has helped actors including Matt Damon and Charlize Theron as well as some professional athletes in kicking the habit. Gaynor’s take on nicotine dependence makes him an outlier, even in an outlier field like hypnosis. “Beating an addiction is not about ‘overcoming’ or fighting it or working on it every day, as we’ve been taught to believe,” he says. “Addictions don’t define us. They are activities we engage in—obsessively and compulsively—that have a beginning and an end. Ending an addiction is a process of going from a lie and being guided into the truth.”

That truth can be bracing. Take the case of a 33-year-old musician and self-described “social smoker” who underwent Gaynor’s standard therapy (three sessions, each an hour long, at $200 a pop). The musician would go to a club, down a few drinks, and suddenly crave nicotine. “Whenever I drank, I was powerless. All I could think about was a cigarette,” he says. The problem: The musician was newly married and didn’t want his wife to know. To mask his vice, he used mouthwash, aired out his clothes, and blamed his stench on secondhand smoke. But his wife didn’t buy it and encouraged him to get help. Since hypnotherapy, he hasn’t had a single cigarette.

“Kerry got me to see a cigarette like an ex-girlfriend—but one who is a serial killer. ‘I don’t go out with her anymore because she just killed a bunch of people in front of me,’ ” the musician says, adding that Gaynor filled him with so much fear that he can’t imagine smoking again. “That guy who smokes three packs a day and doesn’t think about it is going to live to be 100. I’m the person who is going to have one cigarette and die of the guilt.”

As for the health-conscious actress with a weakness for Parliament Ultra Lights, she tried to quit twice after growing tired of sneaking cigs on the sets where she worked. She tried Chantix, which she says “affected me in a physical and emotional way—I got really depressed and gained weight.” Next she bought an e-cigarette. “I loved that I could smoke it indoors and not smell,” she says, “but I felt weird using it in public—people would always want to talk about it because they were curious, and explaining it got old. So I tried to hide it even more than a regular cigarette.”

She continued using the e-cig—what its practitioners call “vaping”—for about three months to stem her urges for the real thing. But eventually she started smoking cigarettes again because it just seemed like less of a spectacle. Now she’s back to her stealthy ways. After all, she reasons, she looks healthy.

Suck It Up: Vape is the Word of the Year