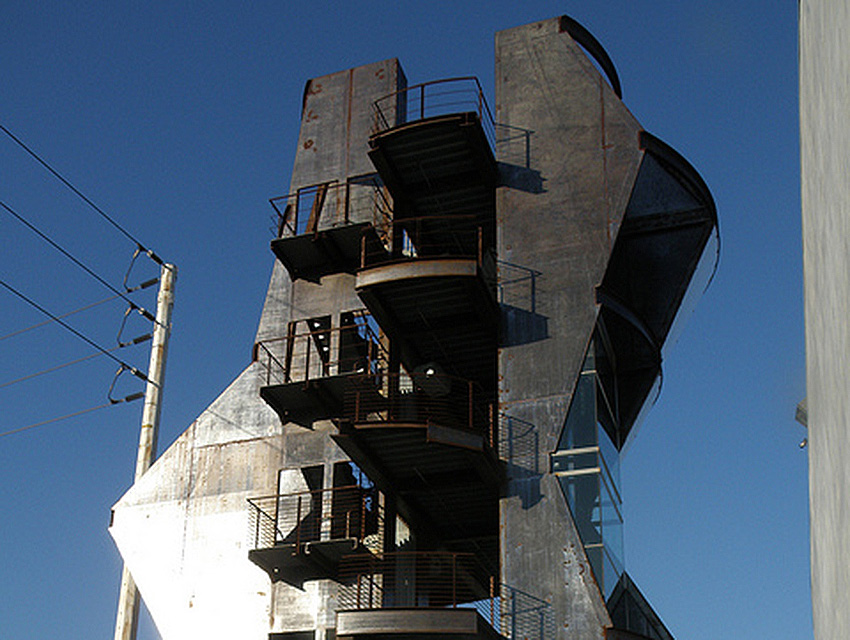 Little more than a mile outside the center of Culver City lies the Hayden Tract, an industrial area that has been transformed over the past two decades by architect Eric Owen Moss and developer Frederick Samitaur Smith. Moss insists that the concentration of his work in such a small space happened accidentally. However unintentional, the effect is otherworldly, as if you’ve entered a city of the future.

Park on the residential streets just west of Hayden Avenue and begin your walk at the Samitaur Tower. The 72-foot structure, built in 2010, is made of steel, glass, and acrylic and is part neighborhood lookout, part performance space, and part gallery. Moss created the unusual building—which can project digital content from five screens mounted on its exterior—as an “icon for the area.” He has succeeded; there’s nothing else like it.

Heading south on Hayden, you’ll come to the Dr. Seuss-like What Wall?—a 1998 brick installation that bulges from the side of a converted warehouse. Next stop, Stealth, a sleek, angular building that anchors Moss’s Conjunctive Points compound, which houses several businesses. Look east, across the parking lot. The concrete and glass balcony jutting out before you is Umbrella, which was designed as a performance space for the Los Angeles Philharmonic’s Green Umbrella series. A guard at the parking kiosk allowed a closer look.

Continue south, cross the street, and gaze upward. This is our favorite: the newly unveiled Cactus Garden, a collection of thriving cacti in steel planters that are suspended 35 feet in the air to soak up the sun. Turn around and retrace your steps to Steller Drive. Hang a right, then a left, on Eastham Drive; take another left on National Boulevard. The Box and the Beehive, two more geometric structures, are on your left, midway down the block. Ready to refuel? No need to leave the tract for lunch. The Bluebird Cafe a few doors down serves midday staples on paper trays. Moss recommends the cheeseburger—it’s juicy and comes with an oversize cupcake.

Eric Owen Moss On His…

Umbrella (1999)
3542 Hayden Avenue
“The glass is laminated and bent in double directions. Every piece is different.”

The Beehive (2001)
8520 National Boulevard
“It’s a conference center with a meeting space on the second floor. The tenant wanted to air it out, so we added a staircase so people can go onto the roof.”

Cactus Garden (2011)
3585 Hayden Avenue
“The silver steel frame was originally another building that used to hold an industrial press. It’s drought tolerant and maintenance free—an advocacy of green in the sky.”