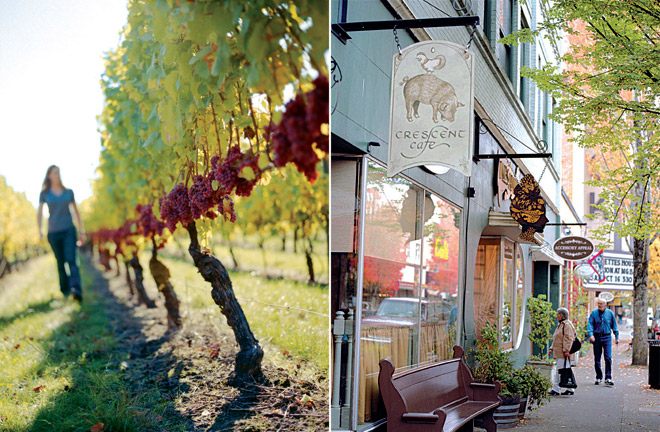 If you were thinking of establishing an easygoing friendship with a grape, pinot noir wouldn’t be your first choice. It’s temperamental, thin-skinned, and fussy. Fortunately Oregon’s Willamette Valley, where some of the best bottles of this varietal are produced, is pinot’s polar opposite. From the tasting rooms to the cafés to the country roads all but enveloped by vineyards, the prevailing mood of this terroir is bonhomie. As welcoming to the viticulturally challenged as it is to the Sideways-caliber connoisseur, Willamette (pronounced “will-AM-it”) is also one of the few great growing regions where parents can hop from estate to estate knowing that if their children get a little rowdy, it likely won’t bend anyone’s palate out of shape.

Morning
A hearty breakfast before a day of wine tasting is no indulgence; it’s a civic duty. Third Street in McMinnville, the de facto capital of wine country here, blossoms with artisan bakeries, locally sourced restaurants, and deep-cellared wine bars. Head to the Community Plate for duck eggs with home fries or to Red Fox Bakery for a seasonal apple scone. Get an aerial view with Vista Balloon Adventures, which will send you floating over miles of vineyards, mountains, and streams. Back on earth most tasting rooms open by 11 a.m. Uncork at Argyle Winery, maker of Willamette’s preeminent sparkling wine. Pinot figures prominently in its bottlings, but Argyle’s Blanc des Blancs, made entirely of Dijon-clone chardonnay, is unbeatable. You can trace the region’s rise at Erath Winery; established in 1968 on 49 acres, it’s now Oregon’s largest pinot producer. At nearby Sokol Blosser, another pioneering concern, the panoramic window in the midcentury-modern tasting room frames Mount Hood. What’s good for grapes is great for birds. Bring your binoculars to Deer Creek County Park, 15 miles southwest of McMinnville. There’s no better place to walk off a before-lunch buzz.

Afternoon
To avoid mood-dampening big-box retailers as you drive from winery to winery, skip the main highways (99 and 219) and try smaller, parallel roads that offer vistas of vine-planted hills and the Yamhill River.  You can return to McMinnville for a lunch of Basque-inflected tapas at La Rambla Restaurant & Bar. If you crave more wine, the sommelier at the Euro-casual Dundee Bistro can recommend pairings for pappardelle with lamb sugo, or a classic Reuben. Near Dundee, a 20-minute drive from McMinnville, lies the Archery Summit Winery, which raises its organic clones and rootstocks in six densely planted vineyards. A few years ago the grapes of Archery’s Looney Vineyard turned a childhood of overcrowding and stress into a 93 rating by Wine Spectator. Don’t miss Stoller Vineyards, whose orchards occupy what was once Oregon’s largest turkey farm; it makes fine Riesling from grapes grown on a single acre of vines. If you’re going with kids, reward them with a visit to Evergreen Wings and Waves Waterpark, with its spritzing playgrounds and simulated ocean. The water slides are epic, and you board them through the doors of a decommissioned jumbo jet. Next door, the Evergreen Aviation & Space Museum is home to Howard Hughes’s Spruce Goose, the billionaire’s fabulous all-wood albatross, no worse for wear after a 1,000-mile barge ride from its former home in Long Beach.

Evening
The night hours in McMinnville are wonderful for quiet dining and comparing tasting notes over a final bottle. Reserve well in advance for dinner at Thistle, where chef Eric Bechard’s farm-to-table explorations vary with the seasons. The lamb’s tongue terrine and gnocchi with stinging nettles will give you a good grasp of this spare bistro’s outsize ambitions. A block up, Nick’s Italian Café, with its monumental wall made from wine barrel staves, is less focused on culinary prestidigitation than on pastas and wood-fired pizzas done exceedingly well. For late-night dining and entertainment visit McMenamins Pub at Hotel Oregon ($60-$111), where you’ll find a rooftop bar with imaginative vegan and gluten-free entrées along with classic pub fare. There’s live music on the weekends, which you might want to enjoy with one of McMenamins’ signature beers. The historic 108-year-old hotel, with its Sgt. Pepper’s-style Victorian psychedelic decor, is trippy, and while only a fraction of the rooms have private baths, the service is friendly. For more genteel accommodations, the Allison Inn and Spa ($340-$575), in Newberg, has a top-notch restaurant, a spa, and daily yoga classes—perfect for recuperating after a long, hard day of imbibing.

Side Trip
A 90-minute drive to the coast brings you to the bayside town of Tillamook. Take the self-guided tour of its eponymous cheese factory to see cheddar in the making and taste plenty of free samples. May through September, in nearby Garibaldi, the steam-powered Oregon Coast Scenic Railroad takes you on a majestic three-and-a-half-hour round-trip tour of Tillamook and Nehalem bays and the coast, with stops for the beach and small-town antiquing.

Getting there: After a direct flight from LAX to Portland, it’s an hour’s drive to McMinnville. If you have more time, consider booking an overnight sleeper car on Amtrak’s Coast Starlight for a breathtaking train trip up the Pacific Coast. Then grab a flight back.

Peak time: Grapes swell on the vines in July and August, and the tourist traffic, though brisk, rarely gets Napa-level crazy. Around crush season in mid-September you can watch or participate in the annual Oregon Grape Stomp Competition.

Weather report: Northern wine country is slightly cooler than the southern environs. In summer cool mornings and evenings frame days that can range anywhere from 70 to 100 degrees.

Portland Flights Are Dirt Cheap Right Now, and Here’s What to Do When You Get There