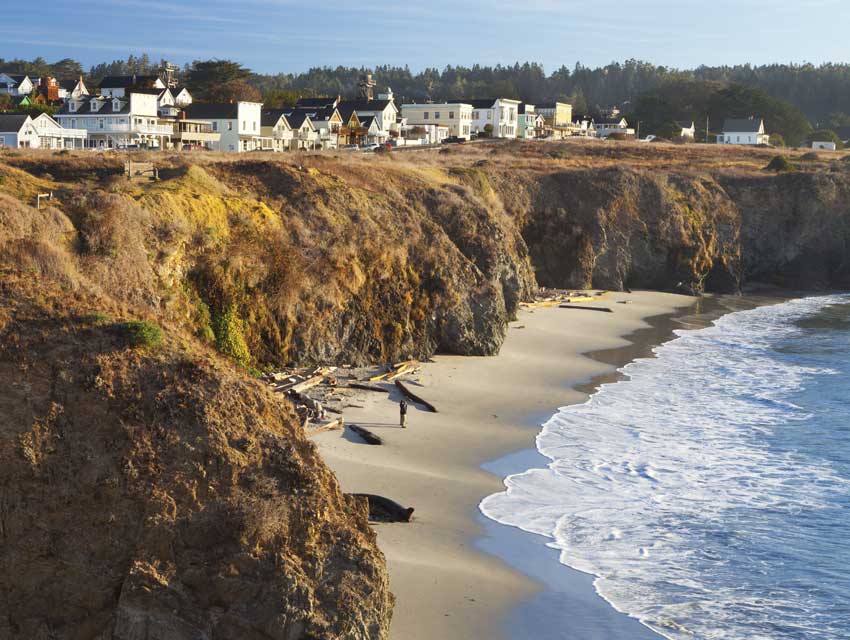 Southern California has beach towns. Up here, three hours north of San Francisco, they’re called coastal towns, and none may be as quintessential as Mendocino. Founded in the 1850s as Meiggsville, the logging hamlet supplied much of the redwood that went into building the city by the bay (and then rebuilding it after the 1906 quake). The New Englanders who settled the area left a legacy of Victorians and saltbox structures that have earned Mendocino a spot on the National Register of Historic Places—and a prime role as the setting for the fictional Maine town of Cabot Cove in the old TV series Murder, She Wrote.

Morning
In a town filled with quaint places to sleep, the Alegria Inn ($79-$299) stands out. The property’s cottages and main house overlook the water with a balanced mix of rustic and refined. The cypress-covered cliffs of Mendocino Headlands State Park are a short walk from here. For a more holistic experience, the Stanford Inn by the Sea ($227-$495) is stashed along a lush hillside above the mouth of the Big River. Billed as an eco resort and wellness center, it has a clean, woodsy aesthetic that adds to the mellowness. There are bikes to pedal, kayaks to pilot, and daily yoga classes held in a room so serene, you’ll feel as if you’re downward dogging in a tree house. An après-namaste breakfast can be had at the Stanford’s restaurant, Ravens, where the kitchen isn’t just organic, it’s vegan, serving dishes like a portobello Benedict and a scramble of ground almonds, sunflower seeds, and spinach; cooking classes are even offered. In nearby Russian Gulch State Park, you can pitch a tent (reservations recommended) or spend the morning exploring the rugged coastal terrain, which includes a 36-foot-high waterfall and a massive blowhole that’s been carved into the rocks. Afterward get a pick-me-up—tea latte with almond milk, perhaps?—in town at Moodys Organic Coffee Bar, which you’ll find across from the fire station on Lansing.

Afternoon
The town of Mendocino’s commercial district is only a few blocks, with small shops hawking NorCal-tinged artisanal wares like “eco groovy” clothing (Twist) and custom jewelry (Mendocino Gems). More ephemeral souvenirs are available at Papa Bear’s Chocolate Haus, which is great for decadent house-made fudge. But save it until you’ve had lunch at Café Beaujolais, a yellow cottage that serves tasty Niman Ranch burgers and ahi sandwiches. The Point Cabrillo Light Station is minutes away by car. Spying on seals, cranes, and the occasional whale is reason enough to visit, but taking a tour of the house to see the giant lenses that guide ships in the night is illuminating, too. Continue up the Lost Coast nine miles and you’ll hit the hamlet of Fort Bragg, home to the 19th-century Skunk Train, which chugs through miles of epic redwoods and verdant mountains (check the schedule; trips change seasonally). Fort Bragg is also home to North Coast Brewing Company. The beer is memorable, though for food you’re better off ordering sandwiches at Laurel Deli for a picnic at Glass Beach, so named for the sea glass that constantly washes ashore. A few miles south, whale-watching boats dock in Noyo Harbor (another good spot for kayaking), and Noyo Fish Company offers up fresh catches—worth a stop in case you have a grill handy.

Evening
Nighttime along the Mendocino coast isn’t any livelier than you’d expect. This is a place for going offline, for a little while at least, and maybe browsing the Gallery Bookshop, which hosts occasional wine tastings. Most of the restaurants in the area use locally grown, farm-fresh ingredients, and choices abound. Trillium Cafe makes a deliciously rich caramelized onion-and-goat cheese tart as well as Covelo Ranch melt-in-the-mouth braised short ribs. Outside Mendocino at Little River Inn—built right on the coast—you’ll find dishes like confit pork “osso buco” and pine nut-crusted salmon. If it’s a drink you’re after, Dick’s Place on Main Street attracts an eclectic crowd, with its just-shy-of-dive-bar vibe, while MacCallum House (another beautiful Victorian inn) has a cozy bar with live music on Fridays. Or for a dance party to go with that drink, the Caspar Inn in the hamlet by the same name can transform from local watering hole to a straight-out-of-Burning Man romp in the time it takes to finish your locally brewed beer.

Side Trip
Head inland about 30 miles southeast, hopping on State Route 128 to sample tasting rooms between Navarro and Boonville (home of Anderson Valley Brewing Company). Or stay coastal and drive 17 miles south to Elk for a burger or stuffed-potato omelette at Queenies Roadhouse Cafe. Views are stunning, and the driftwood-strewn Greenwood State Beach is across the street.

Getting There
From San Francisco Airport, a 90-minute flight from L.A., it’s a three-hour, 167-mile drive to the town of Mendocino.

Peak time
Look for gatherings like the Mendocino Film Festival in the spring; summer is the most popular time to visit, though crowds aren’t much of an issue.

Weather report
This is Northern California, where “layering” is a mantra. Temperatures hover in the 50s and 60s.