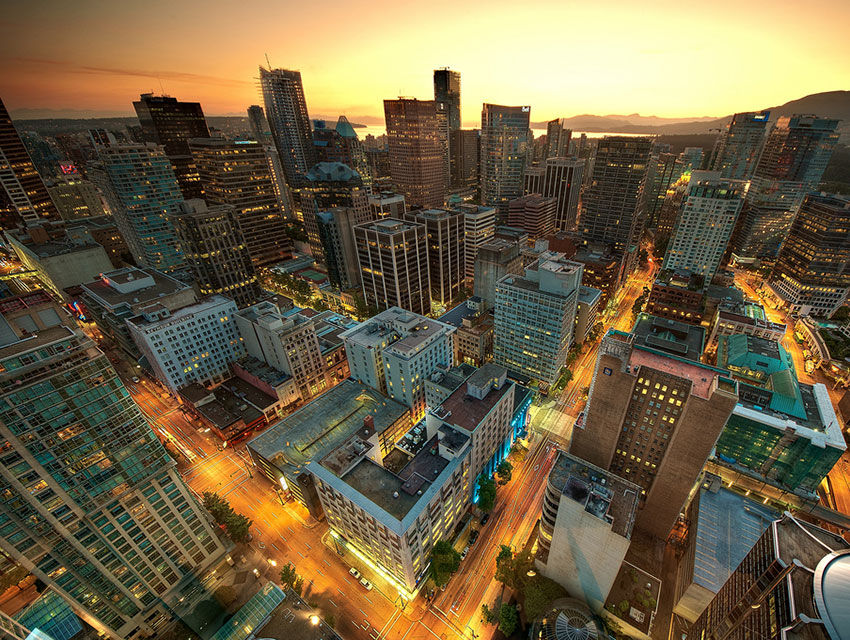 The 2010 Olympics may be fast approaching, but Vancouver is taking things in stride. Ringed by mountains and water, the town knows it has a lock on the most dramatic setting and the best pedestrian infrastructure of any West Coast city. Stanley Park—1,000 acres of gardens and rain forest abutting the heart of downtown—is a marvel of 19th-century urban planning. Late in the last century the city added several miles of seawall paths on which you can pretty much circle the urban core on foot or by bike. The views are even better from a kayak on False Creek south of downtown or a sailboat skimming Coal Harbour to the north. Vancouver likes to boast that it is Canada’s balmiest city, but it’s also one of the cloudiest. Embrace the gray. You’ll come to prize that muted light, which does indeed flatter the region’s ubiquitous flowers.

Morning
The Templeton (604-685- 4612), a retro diner tucked amid the gone-to-seed grandeur of old storefronts and theaters on downtown’s Granville Street, may not look like much. Still, the breakfasts are terrific (baked grapefruit with pecans, “mangled eggs” with bacon and Brie on a croissant), and the ’50s kitsch is laid on sparingly. The caff eine may have you primed for a constitutional along the seawall, but to pace yourself, take a cab across the Granville Street Bridge to Kitsilano and Point Grey. The 15-minute drive around the peninsula is worth it for the quick orientation on Vancouver’s complex geography, the panoramas of the Pacific, and the gardens and museum at the western tip. The Nitobe Memorial Garden (604-822-6038), a Japanese strolling garden with stonelanterns and dark, brooding ponds, is serenely melancholy. Across Northwest Marine Drive you can examine massive totem poles and other native wood carvings at the Musuem of Anthropology (604-822-5087), architect Arthur Erickson’s masterpiece of soaring concrete, glass, and light on the University of British Columbia campus.

Afternoon
Vancouver is known for its food, so stash the guilt and plan to splurge a little. For lunch, head to Kitsilano, on Vancouver’s west side, where you’ll find Fuel (604-288-7905), a new spot that’s won acclaim for dishes like sorrel-speckled brodo ladled over poached egg and risotto of Jerusalem artichoke with smoked duck. Afterward, follow the path at the foot of Denman Street, past the people perched atop giant logs at English Bay Beach and on through the flower beds surrounding the lawn bowling grounds of Stanley Park. An hour’s all you need to explore Lost Lagoon and the lush gardens nearby. Robson Street, the city’s main shopping drag, ends at Stanley Park—so you could, in theory, head right into the jaws of mammon. Better to slip past Robson’s highend chain stores and conserve your plastic for Gastown, a vestige of old Vancouver where trinket shops and grubby pubs are giving way to galleries and such odd little emporiums as Occupied (604-605-3322), with its stock of bright cartoonish totes, kitchen goods, and paper products from Japan. Grab a terrace table at Chill Winston (604-288-9575) and watch the passing crowds over an R&B Red Devil pale ale.

Evening
Steps from Stanley Park on a quiet back street, Parkside Restaurant (604-683- 6912) is an intimate spot that emphasizes local ingredients (veal chop with black trumpet mushrooms and roast duck breast with seared foie gras are memorable entrées). In summer the patio makes for a romantic place to eat. For a lively Asian-tropical setting and ready access to the nightlife of Yaletown (Vancouver’s version of SoHo), try the Blue Water Cafe and Raw Bar (604-688-8078). The whiskey list is one of the most extensive this side of the Highlands, the sushi and the oysters are superb, and the entrées combine the freshest fish (sablefish, arctic char) with meat off erings like Kobe-style short ribs. Two blocks away beckon the sleek, colorful bedrooms of the Opus Hotel (604-642-6787; $279-$469), a hip boutique with fashion- shoot good looks. But don’t call it a night just yet. Keep walking down Hamilton Street to sample the cozy bar at Pinky’s Steakhouse (604-637-3135), the postcollege din at Rodney’s Oyster Bar (604-609-0080), the scene at Soho Billiards (604-688-1180), or the hip-hopping dance floor at Bar None (604-689-7000).

Population: 600,000. Best time to go: Summers are sunny and rarely hot, with twilight lingering until 10 p.m.; rains return in October and drizzle through April. Restaurant scene: More than 100 new ones opened last year. All-over tan: Wreck Beach at Point Grey is Canada’s biggest nude beach. Picnic headquarters: The markets at Granville Island under the Granville Street Bridge stock everything from heirloom tomatoes to Okanogan wines. Fastest route: LAX to Vancouver airport, soon to be linked to downtown by the Canada Line subway.