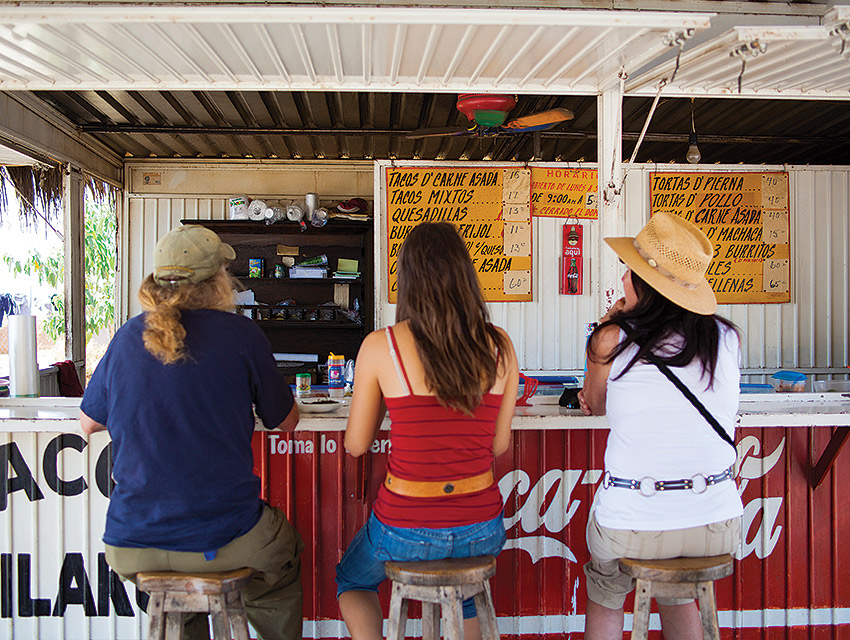 Just an hour north of the resort-dense shores of Cabo San Lucas, the village of Todos Santos is a true oasis—its nickname is “El Pueblo Mágico,” for the underground river that runs beneath and renders the area leafy and green in the midst of a desert. Spread out along and behind high bluffs that line the Pacific, Todos Santos was known for its sugarcane before expat artists and wanderers began gathering here. Though the population numbers no more than 6,000, the town is packed with galleries, restaurants, and bars. This is a place where life proceeds at a stroll, where people dawdle over afternoon coffee or browse for crafts before the set-ting sun bathes the narrow streets in warm pink and yellow light.

Morning
Todos Santos is laid out in a neat grid that makes exploring by foot simple. Try Caffé Todos Santos, across the street and a few steps past the hacienda-style Todos Santos Inn ($95-$325), for just-squeezed juices and heaping breakfast sandwiches. Or take a five-minute drive out of town to Baja Beans Roasting Company and order a cup of freshly roasted prima lavada coffee. While you’re there, visit the Sunday morning farmers’ market for a seasonal brunch—like a frittata prepared with fresh produce—hosted by the roastery. Picturesque though it may be, the ocean here is rough. To catch some full-time wave action, stay in one of the bougainvillea-shrouded bungalows at Rancho Pescadero ($205-$385) on a secluded stretch of sand located six miles south of downtown near the small village of Pescadero. It’s one of the few beaches that’s safe for swimming and surfing on this part of the Baja coast. Morning is ideal for surfing at Playa Cerritos, another couple of miles farther down the coast; the waves are mellow, and you can rent boards or take lessons at the bustling beach club.

Afternoon
Back in Todos Santos, a walk along Calles Juarez and Colegio Militar will lead you to the shopping district, with its artists’ studios and jewelry stores. La Casa del Opalo sells Mexican fire opals direct from the mines in Jalisco; Ismael will help you select a custom silver setting to frame the distinctive sunset-hued stone. Stop at the funky Hotel California, where lunch is served in a sunny, palm-fringed courtyard. Recently renovated, the hotel was opened in 1947 by “El Chino,” a Chinese immigrant who introduced ice to Todos Santos. The in-house restaurant La Coronela is run by a Belgian chef with varied tastes: His menu includes eggs Benedict with smoked marlin and black pepper pappardelle with arrachera beef. If you have time for only one or two galleries, swing by Galería Logan, which doubles as the studio of painter Jill Logan, and Galeria de Todos Santos, a long-established showcase for local talent. If the large contingent of expat and Mexican artists makes you feel outnumbered, join them: The Guaycura Hotel ($195-$450) houses a studio where Baja painters and sculptors give lessons to hotel guests. With only 14 rooms, each featuring a hand-hammered copper sink and private patio, the historic boutique hotel occupies a brick building that was built in the 19th century and has served as a post office, a police station, and (this being Todos Santos) an art academy. The beach is a short drive away, but it’s easy to spend the day by the pool drinking in views of cactus- and palm-dotted terrain that cascades to the Pacific. The vista is even better from the rooftop Sky Bar—an ideal perch for sipping a piña colada at the end of the day.

Evening
For such a small town, Todos Santos has an impressive nocturnal side. Cafés and watering holes fill with tourists and villagers as trumpets erupt from distant plazas at dusk. La Bodega de Todos Santos, a few blocks east of the main plaza, offers samples of Baja’s best wines and olive oils, while the wood-paneled bar at the Todos Santos Inn provides a romantic spot to linger before dinner. When it’s time to nosh, head to the La Casita Tapas & Wine Bar, where sizable portions of caramelized scallops, tuna sashimi, and sea bass with tequila-jalapeño sauce are served in a palapa-roofed dining room. Eating Italian food while in Mexico may seem counterintuitive, but the house-made pastas and shrimp brochetas—wrapped in thinly sliced zucchini and grilled on skewers—are standouts at Tre Galline, although the hosts and the courtyard (strung with flowered lights) are reason enough to grab a seat. There’s no better place to laze with a nightcap as you enjoy the balmy evening air and mingle with locals as they engage in the quintessential Todos Santos pastime: conver-sation.

Peak Time
Avoid the holiday crowds in winter—hotels and flights are jammed. Plan your trip between January and March, when whales make their annual migration, or during the shoulder season months of May and November. Beware  Semana Santa—the week leading up to Easter; many Mexicans travel and go on beach vacations this time of year.

Weather Report
Between January and May Todos Santos is reliably sunny, with daytime temperatures averaging in the 70s and 80s. The thermometer climbs into the 90s in April, and July through October is hurricane season, with August and September the wettest months.

Side Trips
Between October and February Cabo Expeditions leads snorkeling tours, where you can swim with gentle whale sharks, the largest fish in the sea. Trips depart from Cabo San Lucas, about an hour and a half south of Todos Santos. To get an unparalleled look at the region’s endangered sea turtles—among them leatherback, olive ridley, and black—contact Tortugueros Las Playitas; depending on the season, you can help release hatchlings and relocate nesting turtles.