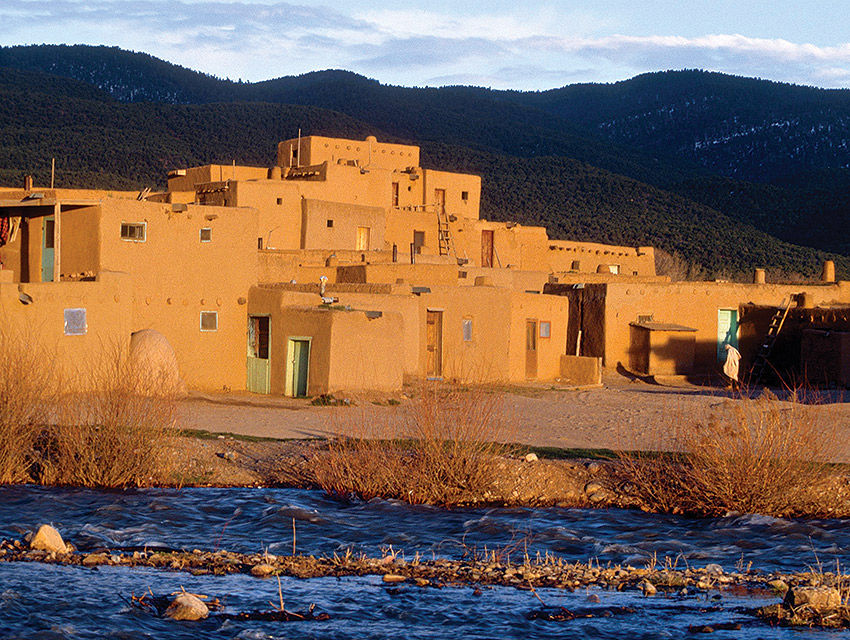 Almost 7,000 feet up in the Sangre de Cristo Mountains, Taos is what Santa Fe once was: a high-desert village where art galleries outnumber stop signs, the Native American and Spanish influences prevail, and the most pressing decision is whether you’ll be ordering the red or green chile sauce. Sunshine and snow bathe the blocky, earth-toned buildings huddled around Taos’s historic, 1700s-era plaza—among them frontiersman Kit Carson’s home—and the scent of smoldering piñon pine hangs in the crisp night air. Base yourself at Casa Benavides ($105-$300), a pueblo-style hotel whose adobe-walled rooms come with wood-burning fireplaces and viga ceilings. Just a hop from the plaza, you’ll barely need your rental car, unless you decide to make the 19-mile drive to sample the trails at Taos Ski Valley, a resort known for its light, dry powder and retro simplicity.

A stroll to the plaza will help you get your bearings, but continue past the turquoise jewelry-and-moccasin shops and you’ll find winding streets and alleyways that are anything but mountain-town cliché. With terra-cotta tortilla warmers, spices, and blue corn posole mix, Taos Cookery has more than enough to fill that extra suitcase you brought. The walls of Common Thread are draped with fabric imports from around the world—Indian silks, kitschy Día de los Muertos patterns from Mexico, brushed wool blankets made in Nepal. The proprietor of G. Robinson Old Prints & Maps wears a newsboy cap (unironically) and sells antique maps dating from the 14th century along with lithographs of plants and fish. At Chocolate + Cashmere, you can pop an organic green chile-raspberry bonbon while browsing hats, scarves, and hand warmers made from thick, hand-loomed Scottish yarns in crimson, periwinkle, and other bright colors.

In the 1920s, D.H. Lawrence bartered his Sons and Lovers manuscript for a Taos ranch that Georgia O’Keeffe later holed up in. During the 1940s, artists flocked to the region, kicking off the Taos modernist art movement, their abstract work often infused with the ochers and deep greens of the surrounding landscape. You can get a primer at the Harwood Museum of Art, which devotes an entire gallery to the Zen-like simplicity of painter Agnes Martin, who lived in Taos the decade before she died. The adobe village of Taos Pueblo, a UNESCO World Heritage Site inhabited by Native Americans from the Pueblo tribe for more than 1,000 years, feels stagy if you stick to the 20-minute guided walking tour, but it’s transformed several times a year when its members descend for traditional ceremonies such as the Buffalo Dance (early January). All winter a sharp eye will catch sight of the resident buffalo herd roaming the wide-open range west of the pueblo.

Until recently your appetite was best sated in Santa Fe, 70 miles to the south, but a few new additions have revitalized the Taos culinary scene. The Love Apple, a farm-to-table restaurant in a whitewashed adobe that’s aglow with candles, is Taos’s finest. Cornhusk-wrapped trout with cilantro-lime relish and baked tamales topped with mole and a fried egg offer fresh takes on local favorites. Farther up the main road is Orlando’s, the go-to spot for traditional New Mexican food. Atop Taos Mesa, which spreads to the west of town until the Rio Grande slices through it, you can sip a Holy Mole Porter and snack on soft pretzels with green chile-cheddar dipping sauce at Taos Mesa Brewing, a recent arrival that inhabits a corrugated-tin airplane hangar. In the nearby village of Arroyo Seco (en route to Taos Ski Valley), Aceq has a tight seasonal menu of such New Mexican fusion dishes as fried squash blossoms and lamb chilaquiles, while Taos Cow, across the street, traffics in distinctive ice cream (try the lavender). Later, when you’re in town again, hit the Historic Taos Inn, near the plaza, for a margarita nightcap and live music beneath the vaulted ceiling of the diminutive Adobe Bar, particularly if the blues-funk band Monkey Feeders is onstage. Then it’s back through the icy winter night to your room, where the fireplace is waiting.

Getting there: It’s a two-hour flight on American to Santa Fe. Rent a car for the 80-mile drive north to Taos. Flying into Albuquerque is cheaper but adds an extra hour of road time. Winter driving conditions are safest on U.S. Route 285, which traces the rim of the Rio Grande gorge. If it’s mild out, the High Road is a scenic alternate route.

This Snowy Getaway Is Exactly What You Need Right Now