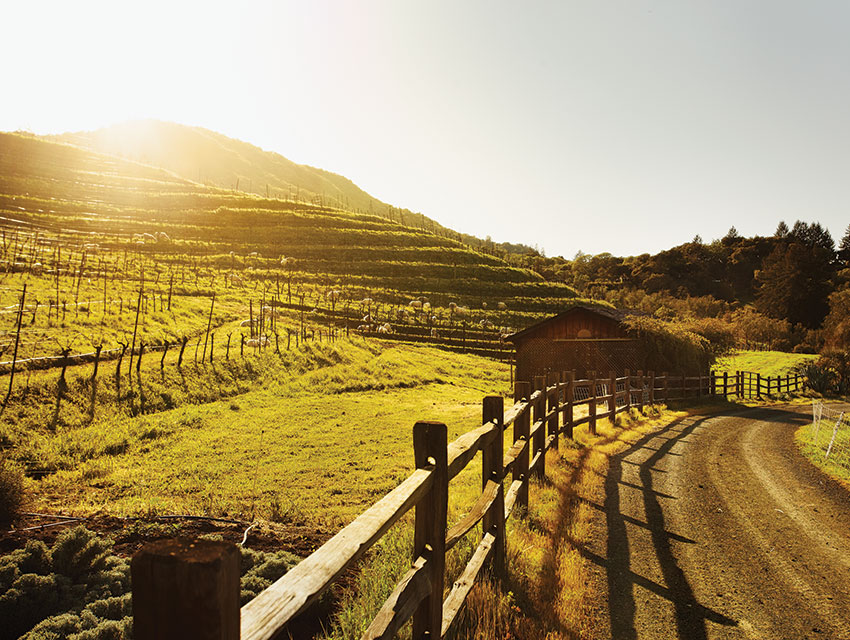 In the language of the Miwok Indians, Sonoma is thought to mean “valley of the moon,” which is the title Jack London gave to his 1913 novel after he moved to the area. London was rhapsodic about his new home: “The sunset fires,” he wrote, “refracted from the cloud-driftage of the autumn sky, bathed the canyon with crimson, in which ruddy-limbed madroños and wine-wooded manzanitas burned and smoldered.” The 17-mile valley is separated from Napa by the rugged Mayacamas Mountains to the east, with the Sonoma Mountains heaving up to form its western wall. The southern gateway is the old Spanish town of Sonoma; the tiny village of Glen Ellen, near where London lived, lies smack in the middle, and Kenwood marks the northern end. The valley teems with more than 80 wineries, many of them open to the public. Unlike glitzy, often hectic Napa Valley, the bucolic Valley of the Moon has the calming effect of its orbiting namesake.

»Morning
Hugging the base of Sonoma Mountain, Glen Ellen has a 19th-century aura accentuated by several old brick and stone buildings along the hamlet’s main drag. On the edge of town you’ll find the Gaige House (800-935-0237; $169-$699), a stylish 23-room boutique hotel with a spare, elegant Japanese aesthetic. Stone lanterns line the walkways between cedar-shingled Zen suites, which feature sculpted granite soaking tubs so masive that the rooms were built around them. You can breakfast on the deck, which looks onto a swimming pool ringed with white oleanders. Then make the short drive to the 1,400-acre Jack London State Historic Park (707-938-5216) and hike a half mile from the parking lot through oaks and redwoods to the ruins of London’s dream home, Wolf House. It burned down right before the novelist and his wife, Charmian, were to move in. What remains of the enormous stone walls and the reflecting pool conveys the wealthy socialist’s grandiose vision of California living. Hidden in a volcanic basin outside the park is the Benziger Family Winery (888-490-2739), which is heavily involved in biodynamic (some call it “beyond organic”) viticulture. Make a reservation, and you can learn all about the practice while being towed behind a tractor—one of the valley’s more entertaining tours.

»Afternoon
For lunch try the cozy Fig Café (707-938-2130) in the center of Glen Ellen for steamed mussels and fries, a specialty here. There are other options eight miles south in Sonoma. On the northwest corner of the town’s historic plaza look for the Girl & the Fig (707-938-3634), sister to the Glen Ellen restaurant. The menu skips from chickpea panisse cake to duck confit and potato hash, and you can have the restaurant’s cheese counter, the Salon de Fromage, pack a plate to go. Pick up a bottle of wine at one of the tasting rooms on the plaza and mosey over to a shady spot in the park to contemplate how so many species of ducks get along together in one pond. Spread over eight acres, the plaza is dotted with buildings from early California, including the Mission San Francisco Solano, built in 1823 as the northernmost of the state’s chain of 21 missions, and the adobe barracks built by General M.G. Vallejo, the Mexican officer who laid out the plaza in 1835. They’re part of Sonoma State Historic Park. Following a gringo revolt against Mexican rule in 1846, Sonoma enjoyed 25 days as California’s capital. If you’ve got the time, catch one of the docent-led tours that are provided on weekends. To sample another kind of history, walk a couple of blocks northeast of the plaza to the stone building that houses the Vella Cheese Company (707-938-3232), established in 1931. They age their sweet, nutty dry Jack for up to three years before selling it.

Sonoma Valley in 60 Seconds
Getting there: Sonoma lies 45 miles northeast of San Francisco off Highway 12. Pace yourself: Sonoma was the first spot in America to be dubbed a “Cittaslow” (an Italian coinage for “slow town”) for its authenticity and laid-back pace. Make a date: Elvis Costello and the Sugarcanes will close the Sonoma Jazz Festival, which runs from May 21 to 23. Side trip: Healdsburg, 45 minutes from Glen Ellen, has a tree-canopied square edged with shops and remarkable restaurants, among them Cyrus (707-433-3311). Just outside Healdsburg is Dry Creek Valley, home to some of the state’s best zinfandels.