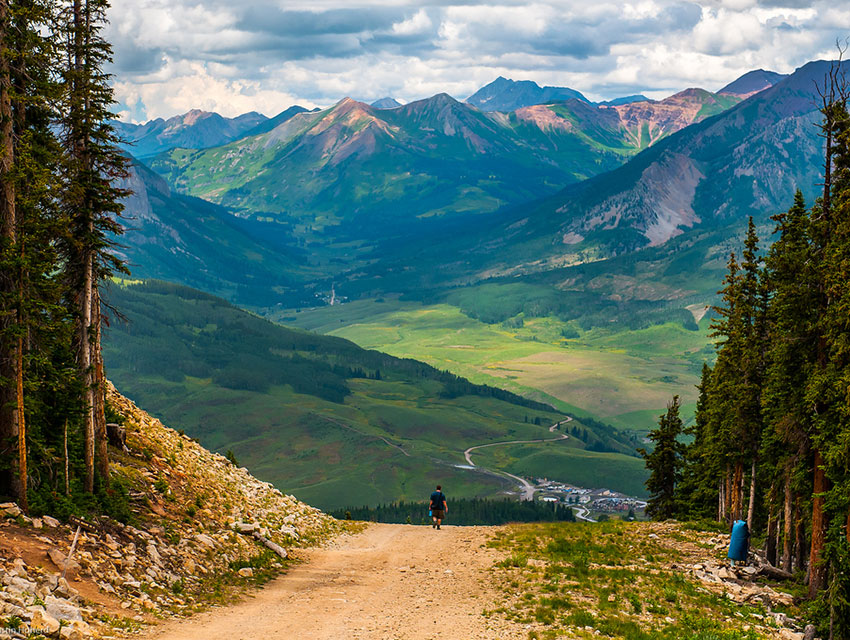 Photograph by Chris Ladoulis
There’s something almost peculiar about Crested Butte. It’s got heaps of charm—colorful Victorian storefronts line the tiny downtown, which began as a mining camp in the 1880s—and the terrain at nearby Mount Crested Butte is catnip for skiers and snowboarders. But for all that the area has to offer, the crowds here are comparatively scant. One possible reason: Crested Butte isn’t easy to reach. Set deep in southwestern Colorado, it is a five-hour drive from Denver, and the closest airport is a regional one 30 miles south in Gunnison. Though Crested Butte Mountain Resort has undergone serious capital improvements of late—witness the new base village with the obligatory boutiques—the area maintains an authenticity you won’t find in many ski towns these days.

Morning
Strolling through town on a crisp winter morning is well and good, but you’re here to make fresh tracks. After grabbing an americano at CAMP 4 COFFEE (970-349-2500), devoted locals head out to MOUNT CRESTED BUTTE (888-317-6482) when the lifts open at nine. The mountain consists largely of beginner and intermediate terrain, but it also has the most in-bounds extreme skiing in the country (this is, after all, where the U.S. Extreme Freeskiing Championships were born). When double diamonds aren’t enough, book CRESTED BUTTE MOUNTAIN GUIDES (970-349-5430) for a backcountry rush in Red Lady Bowl, which you have to hike up before zooming down the 3,000-foot vertical drop. Back in town, CRESTED BUTTE NORDIC CENTER (970-349-1707) offers about 30 miles of groomed trails (along with cross-country ski rentals and lessons) strung through stands of aspen and pine.

Afternoon
The lifts close at four, but with so many runs and so few lift lines, it’s not difficult to get your fill before then. You can kick back in the bar at the LODGE AT MOUNTAINEER SQUARE (970-349- 4000), the centerpiece of the new base village, which sits in what is known as the town of Mount Crested Butte. But you’ll miss out if you don’t take the free shuttle three miles south to Crested Butte proper, where the clapboard shops along the main street, Elk Avenue, form a National Historic District. Families hang out at the Nordic Center’s sledding hill and outdoor ice-skating rink, and you can pop in for a slice or an après-ski cocktail at the BRICK OVEN (970-349-5044), which just remodeled its outdoor patio and bar. WESTWALL LODGE (888-349-1280; $219-$499 during early season) provides some of the area’s only ski-in/ski-out accommodations: roomy condos serviced by staff that includes a ski valet. The help is minimal but the digs are more intimate at CRESTED BUTTE RETREAT (970-349-1658; $190-$3,350), a ten-room boutique hotel close to the base village. The place feels like a rich friend’s mountain getaway; suites come with chenille- covered furnishings, a wood-burning fireplace, and a hot tub on a private deck. Breakfast is included, and you can reserve the house chef for a five-course dinner in the communal dining area or your room.

Evening
The town gets a second wind at night, with kids gathering on street corners and bands setting up their gear. The kitchen at TIMBERLINE (970-349-9831) is known for its selection of game, such as seared and roasted medallion of elk with a blueberry-merlot demiglace, and the pan-fried trout with a Chimayo chile sauce. Or try CRAVE (970-349-0570), where the chef shows off his Louisiana roots with dishes like crawfish beignets and fried quail with spicy peach chutney. Crested Butte became a magnet for hippies and artists in the 1970s, which may explain the small town’s strong cultural offerings. The CENTER FOR THE ARTS (970-349-7487) is a 215-seat theater that has hosted acts like Los Lobos and Robert Earl Keen, and throughout much of the year, ARTISTS OF THE WEST ELKS puts on an art walk, featuring receptions at eight galleries on the last Thursday of the month. Later you can stop by the PRINCESS WINE BAR (970-349-0210), which has dessert drinks and coffees and live guitar music, or LOBAR (970-349-0480), a loungey joint presided over by a DJ. Just don’t stay out too late. The powder won’t wait.