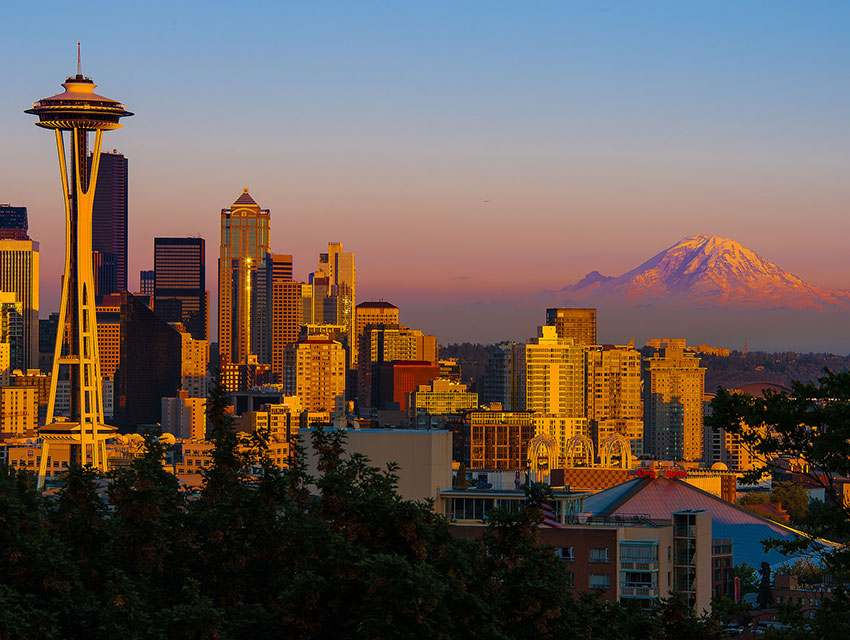 The Emerald City has a knack for innovation. UPS, REI, Nordstrom, Sur La Table, Eddie Bauer, Amazon, and of course Starbucks were hatched here, but even Seattle’s most heavily trafficked precincts remain more earthy than slick. The lush, rain-fed surroundings may have something to do with it. Settled by European descendants in 1851, the town has its roots in the timber industry but these days feels a little like a mash-up of San Francisco and Echo Park. Cupped by the Olympic Mountains and the Cascades, the city rises and falls along a chain of hills above Elliott Bay, the inlet to Puget Sound and its woodsy islands. Long known for craft beers and exacting coffee habits, Seattle also has a lively food scene to go along with a rugged beauty that you can find only in this part of the country.

»Morning
If you’ve got the gumption, you can cover much of the area without a car. In a century-old building that stands a few blocks from the water, Kimpton’s Alexis Hotel (866-356-8894; $175-$535) is ideally located, with a taste for maturely hippified suites. It’s across the street from the splashy-mod Hotel 1000 (877-315-1088; $199-$5,000) and a straight shot down Madison Avenue from architect Rem Koolhaas’s angular Seattle Central Library (206-733-9609). Ten floors up, the reading room offers skyline views beyond the webbed glass walls. From here you could hoof it to the Westlake Center mall and play tourist with a ride on the monorail to the Space Needle (206-905-2100), passing through the Frank Gehry-designed experience music Project (877-367-7361) on the way. The interior is cavernous, but jamming in the Sound Lab upstairs is almost as fun as geeking out in the science fiction museum on the far side of the building. A ten-minute walk will take you to see the works of Calder and others in the waterfront olympic sculpture park. Ride the monorail back downtown, and you can catch brunch at Mistral Kitchen (206-623-1922), though dinnertime is when the place soars with blackmouth chinook, clay oven-roasted rib eye, and spot-on drinks.

»Afternoon
James Beard Award-winning chef Tom Douglas owns several restaurants around the city. Crisped in the applewood-fired oven at Douglas’s Serious Pie (206-838-7388), the rectangular pizza crust is just sturdy enough to support the payload of combinations like sweet fennel sausage, roasted peppers, and provolone. The downtown shopping district is close by. Or head for the pike place market, a cross between L.A.’s Farmers Market and San Francisco’s Ferry Building. Approaching from Post Alley, you’ll pass the Market Theater Gum Wall, its brickwork stippled with colorful wads of the stuff. You can pay homage to the bean at the world’s first starbucks, opened at Pike Place in 1971 (and originally stocked with Peet’s Coffee from Berkeley). No tourist trough, the bistro Matt’s in the Market (206-467-7909 or) lures Seattleites with its intoxicating fish stew and pork belly confit banh mi. Browsing the shops along 1st Avenue, you’ll pass the Seattle Museum of Art (206-344-5275), but there’s more to the city than downtown. Fifteen minutes by car, the boho Fremont neighborhood is home to the giant troll sculpture under the Aurora Bridge and a statue of Vladimir Lenin that stands tall amid the low masonry buildings. Beer and boutiques are plentiful here; more unusual is the organic Theo Chocolate (206-632-5100). Housed in an old Redhook Brewery, the factory’s open for tours.

»Evening
The scene is up to the minute on Capitol Hill, so strap in. Inside Needle and Thread (206-325-0133), a mild-mannered boîte, you’ll find a Bakelite phone guarding a vault door. This is the portal to tavern law (206-322-9734), the wee speakeasy upstairs where the chandeliers are sparkly and customers can order cocktails based on flavor profile rather than name. Nearby at Quinn’s Pub (206-325-7711), the two floors are packed with diners pairing their wild boar sloppy joes and oxtail gnocchi with pilsners and stouts from the walloping beer list. The melrose project is a gorgeous repurposed complex where chef Matt Dillon serves stewed artichokes with mussels and dried tuna heart and lamb merguez flageolet at his loftlike Sitka & Spruce (206-324-0662). Midway between those restaurants, Sun Liquor Distillery (206-720-1600) opened in March and offers its own small-batch spirits. Within staggering distance is the hopping Chapel Bar (206-447-4180), its doleful amber windows a vestige from when the property was a mortuary. Afterward walk across the street to Bauhaus Books & Coffee (206-625-1600) for an exquisite double shot of espresso; there are still many hours left on the clock.

Seattle in 60 Seconds
Population: 608,660. Weather: It rains about 37 inches a year—less than in New York. DIY: The Seattle Streetcar (206-553-3000) affords a cheap way to coast the International District. Or ride the Puget Sound Ferry (888-808-7977) to Bainbridge Island. Amped up: Three days of arts and music, the Bumbershoot Festival will attract tens of thousands this September. Hole foods: The edibles at Top Pot Doughnuts (206-728-1966) drew President Obama for a fall photo-op.