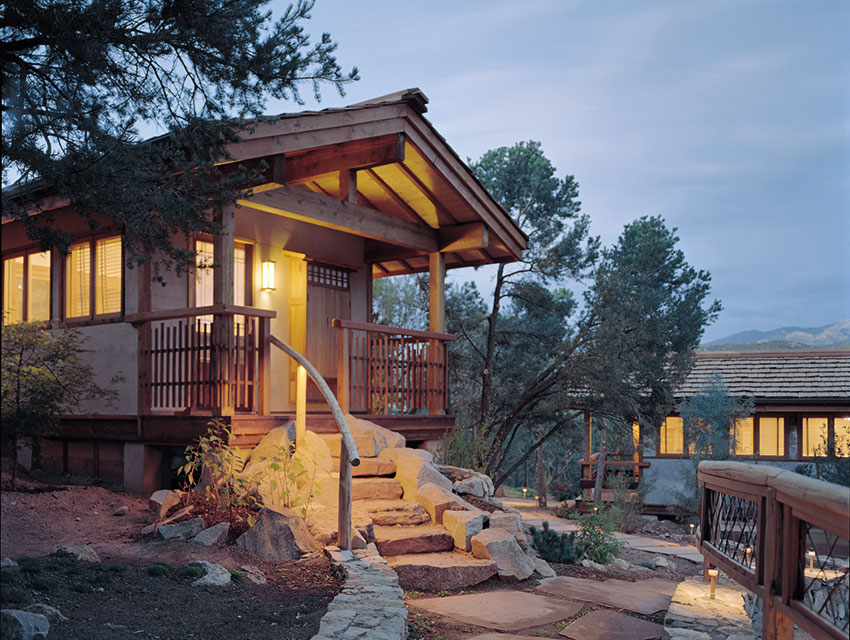 Seven thousand feet above sea level, Santa Fe takes on a different dimension in winter, its stone-meets-sky landscape intensified under a blanket of white. Shaped by clashing cultures—from Pueblo to Spanish, Mexican to Anglo-American—the 404-year-old city has long been a source of inspiration for spiritual seekers and artists (Willa Cather, D.H. Lawrence, and of course, Georgia O’Keeffe among them). The first locomotive arrived here in 1880, and the railyard plot whose tracks once connected Santa Fe to the rest of the country is now the site of rapid revitalization, with art galleries, restaurants, breweries, and parks. Beyond the former switching ground for trains, as snow dusts the rocky mesas and the city’s tawny pueblo-style buildings, the tourists thin out, letting you get a taste of what it’s like to live in the capital of Southwestern art.

» Morning
For a central location and reliably elegant digs, the Rosewood Inn of the anasazi (888-767-3966; $249-$515) has slim competition. Upstairs, the hotel’s 58 rooms feature pine-beam ceilings, carved four-poster beds you climb into with the help of a footstool, kiva fireplaces, and Navajo rugs. To start the day, head out into the crisp morning air and stroll past the mud-colored buildings surrounding the central plaza to Cafe Pasqual’s (505-983-9340), where people file in to fill up on breakfast burritos and huevos motuleños with sautéed bananas amid the brightly colored murals. A few blocks over at the New Mexico History Museum (505-476-5200), you can see the mano and metate used by the Pueblos to grind grains along with vestiges of pioneer life, including Conestoga wagons. Next door at the Palace of the Governors (505-476-5100), the original government building built by the Spanish in 1610, exquisite animal-hide paintings depict scenes from the region’s Spanish colonial past. One mile south at the Santa Fe Railyard, locals kick off their weekend at the farmers’ market (505-983-7726), munching on freshly roasted green chile peppers, blistered and salted on open skillets, or opting for the cranberry-apple strudel and cherry empanadas from the makeshift café. Two of the Railyard’s most esteemed galleries, the loftlike Lew Allen (505-988-3250) and SITE Santa Fe (505-989-1199), a nonprofit platform for rising artists, are across the street near Fredrick Prescott’s famous kinetic elephant sculpture. You’ll find more art a quick drive away on Canyon Road, the city’s original gallery row. Lined with elms and cottonwoods, the mile-long stretch hosts more than 100 contemporary spaces, many with front patios where you can linger among the flowerpots and sculptures.

» Afternoon
The Coyote Cafe (505-983-1615) is credited with putting the city’s food scene on the radar when it opened in 1987, but for a different sort of Santa Fe classic, line up at Roque’s Carnitas, the food cart that has been selling its beloved green chile tamales at the corner of San Francisco Street and the Old Santa Fe Trail for 25 years. About a mile away at Vinaigrette (505-820-9205), the beet and goat cheese salad comes topped with toasted pistachio bits. Owner Erin Wade left behind fashion design in Milan to open this salad bistro three years ago, and her farm in nearby Nambé supplies most of the restaurant’s greens. To glimpse the barren plateaus and rugged ranges that encircle Santa Fe, make the one-hour drive to the piñon-covered Jemez Mountains for a sleigh ride in Valles Caldera (866-382-5537), an 89,000-acre national preserve inside a collapsed volcanic crater. If you get back before 6 p.m., stop by Kakawa Chocolate House (505-982-0388) on the east side of the city. The drinking chocolates—served in dollhouse-size cups and laced with chile, spice, and flowers—trace the history of cacao from the days of pre-Columbian Mesoamerica to 18th-century European courts.

» Evening
You can nurse a Santa Fe Nut Brown Ale at the Anasazi’s pint-size bar. A short walk away, in a weathered adobe, The Shed (505-982-9030) dishes out tangy fish tacos and blue corn enchiladas with posole. The setting is more refined at Encantado Resort’s Terra (877-262-4666), 15 minutes from downtown. Chef Charles Dale’s sweet corn soup with huitlacoche and Guajillo prawns with white chocolate mole puree are inventive without losing a sense of place. For a nightcap, visit Ten Thousand Waves (505-982-9304), a mountain spa modeled after a Japanese onsen. As popular as it is, few consider a soak under the stars in one of the outdoor baths, the steam rising into the air.

The basics: The city enjoys 300 days of sunshine a year but receives plenty of snow between November and March. Touch of class: Santa Fe School of Cooking (800-982-4688) offers three-hour courses, where you’ll learn how to prepare tamales in banana leaves, stuff chiles, or chop tomatillos for salsa. Hit the slopes: Sixteen miles northeast of downtown, Ski Santa Fe (505-982-4429) features 73 trails and seven chairlifts. Getting there: American Eagle has direct flights to Santa Fe, but the fares are generally lower into Albuquerque, which is an hour by car.

Where to Get Your Fix of Hatch Chiles Right Now in L.A.