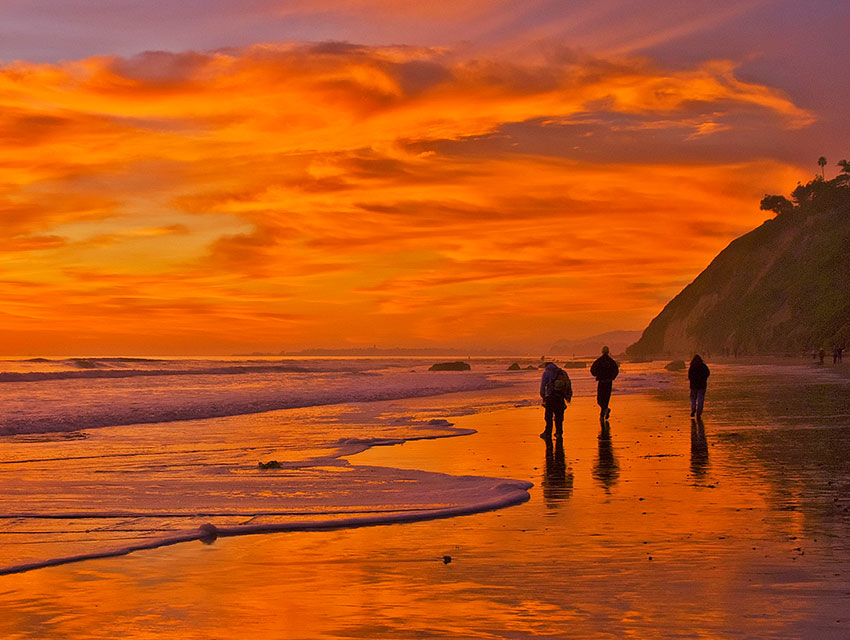 Santa Barbara didn’t always look like Spain on the Pacific. Before the 1925 quake leveled the city, it was a dull cluster of clapboard buildings, and civic leaders pined for the means to attract more visitors. To that end, local newspaper founder Thomas Storke, activist Pearl Chase, and others spearheaded remaking the damaged town in the romantic image of Andalusia. Now Santa Barbara draws waves of day-trippers, especially in early August for Old Spanish Days Fiesta. The remarkable natural setting—nowhere else in Southern California are the mountains so close to the ocean—was largely preserved by a no-growth policy. The city still hews to a Mediterranean aesthetic, and even the newest office complexes are prettier than most homes. Charming shops and restaurants line the main drag, State Street, and beckon from adjoining courtyards.

»Morning
Most hotels in Santa Barbara mandate a two-night minimum on summer weekends. The Agave Inn (805-687-6009; $169-$199), a renovated 1950s motel within walking distance of the famous mission, offers single-night stays on Fridays at one of the city’s best rates. Families will find calm waters and soft sand at the beach adjoining the Cabrillo Pavilion Arts Center. For classic Santa Barbara shopping, go to State Street’s La Arcada, a courtyard filled with independent stores, including the popular gift emporium Lewis & Clark (805-962-6034). Just past the turtle-filled fountain is Jeannine’s (805-687-8701), a bakery and café with Paris-worthy croissants. The Tunisian tiles alone are worth the one-block walk north to the county courthouse, where a free docent-led tour starts at 2 p.m. on Saturdays. Check out the Library across the street; at the rear entrance are 1959 murals by Channing Peake and Howard Warshaw, two of the city’s premier artists, that depict scenes from Don Quixote. Back at La Arcada, The Andersen’s (805-962-5085) has been serving baked sweets since 1976. Don’t pass up the Sarah Bernhardt, a mound of glazed chocolate mousse on an almond cookie.

»Afternoon
For a casual lunch skip the long line at La Super-Rica (805-963-4940) and head to another Milpas Street taquería, El Bajio (805-884-1828), for authentic Mexican cuisine, like the piquant adobada sope. At Olio e Limone (805-899-2699) downtown, Santa Barbara’s top kitchen turns out house-made pastas with memorable sauces, such as the garganelli al ragu d’agnello or the pappardelle al sugo di quaglie e funghi. Nearby is the almost block-long mosaic California Today—another 1959 public artwork—which offers a poignant vision of postwar America. Consider taking a tranquil post-lunch stroll on the paved path around the Andree Clark Bird Refuge. At its eastern end is the Santa Barbara Cemetery, whose chapel holds hidden treasure: 1934 frescoes by Alfredo Ramos Martinez, a Hollywood favorite with patrons like Alfred Hitchcock and Edith Head. For a look at Montecito, Santa Barbara’s most gracious neighborhood, cruise the foothills of East Valley Road. Stop at Our Lady of Mount Carmel Catholic Church, resplendent with decorative art that surpasses the mission’s. You can buy drinks at Pierre Lafond Montecito Market (805-565-1502) and shop at the home boutique Upstairs at Pierre Lafond or next door at Wendy Foster (805-565-1506) for one-of-a-kind women’s clothing.

»Evening
At the San Ysidro Ranch (805-565-1700; $650-$2,100), ten minutes from downtown in Montecito, billionaire Ty Warner has given the historic resort—where JFK honeymooned in a rustic 1920s cottage—a luxurious polish and price tag to go with it. Any qualms at busting budgets are soothed by the exquisitely outfitted cottages, the world-class gardens, and the setting in Montecito’s most majestic canyon. Both restaurants at the ranch are housed in a 150-year-old sandstone building. The more intimate Plow & Angel (805-565-1745) has superb cocktails and a less pricey comfort food menu that includes flatiron chicken with mac and cheese. Downtown at Zaytoon (805-963-1293), near the original Santa Barbara presidio, you can savor shawarma, sambosik, and other mezes at a fire pit table on the terrace; on Fridays live flamenco music accompanies the meal. Four blocks away first-run films are screened at the Arlington Theatre, the most revered atmospheric movie palace in California. Ogle the 1930s tiles on the kiosk, but the surprise is inside, where a Spanish courtyard has been re-created, from the balconied stucco buildings to a starry sky. For real stargazing, park by the Four Seasons Biltmore in Montecito, descend the stairs to the beach, and saunter left to the ghostly hulk of the Miramar Hotel, whose restoration—eagerly awaited by the families who patronized it for decades—is now in the hands of L.A. developer Rick Caruso.

Santa Barbara in 60 Seconds
Population: 88,500. Drive time: Leave before 2 p.m. on Sunday or be caught in the crawl out of town. For a scenic exit, Highway 192 winds through the Carpinteria foothills before it connects to Highway 150 into Ojai; you’ll see Lake Casitas on the way. Once in Ojai, take Highway 33 back to the 101 in Ventura. History repeats: Where Lotusland is surreal, Casa del Herrero, the other Montecito estate open to the public, is magic. The George Washington Smith homage to the Alhambra has a watercourse through the garden and tiled seating in the outdoor rooms. Call 805-565-5653 for reservations.