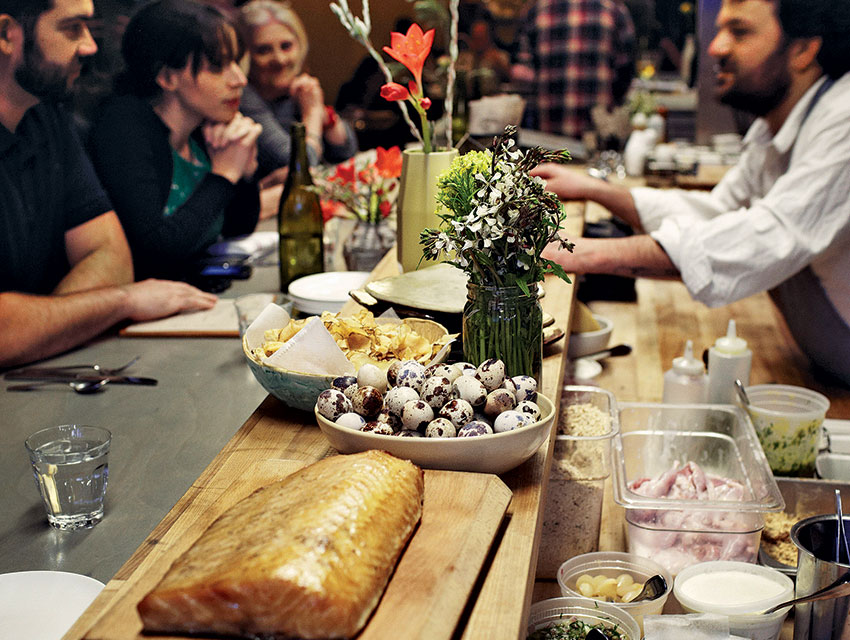 Too often San Francisco is reduced to being a tourist circuit that starts at Fisherman’s Wharf, extends through North Beach and Chinatown, and culminates in a cable car ride to Market Street. For a different experience—and a pedestrian-friendly antidote to L.A.’s sprawl—seek out two less-traveled neighborhoods. Burrowed between Haight Ashbury and the Civic Center, Hayes Valley feels a bit like today’s Brooklyn when you walk among its smart boutiques and low buildings. About a mile west over hilly terrain above the panhandle (or eastern spur) of Golden Gate Park, NoPa—short for “North of the Panhandle”—mixes a little grit with its eclecticism, giving you plenty of reasons to save the city’s more famous sights for another time.

Morning
Don’t be confused by the rustic name; Hayes Valley is just north of downtown. Developed in the 1850s with an abun-dance of stately Victorian mansions, the neighborhood came into its current identity after the last of the 101 freeway that had cordoned off the area was torn down in 2005. These days it’s a breakfast mecca: banana-coconut-macadamia pancakes and diner fare at Stacks, Dungeness crab ome-lettes and Bloody Marys at Absinthe Bar & Brasserie, and on Sundays a killer Germanic brunch at beer-and-brat haven Suppenküche. You can put the calories to use on a guided bike tour with SoSF, whose beginner-minded “Heart of the City” ride covers eight to ten miles. Spinning past the Civic Center, you’ll spot the Asian Art Museum (with its globe-spanning, 18,000-piece collection). Then you’re on to Golden Gate Park, where so many attractions pack the 1,017 acres, you could get lost for days. If cycling isn’t your thing, set your GPS for the Conservatory of  Flowers, a lush botanical preserve in a late-Victorian building, and the four-story rain forest biosphere at the California Academy of Sciences before riding a frog on the park’s gorgeous 1914 Herschell-Spillman carousel.

Afternoon
Exploring the busy sidewalks and boutiques of Hayes Street in the afternoon, you’ll get a local’s perspective of the city and find ample opportunities to spend your cash. Pop into Rand + Statler for accessories, knickknacks like animal-themed shoehorns, and clothes from fashion-forward brands like Acne and Vena Cava. A few doors down, sister store Azalea is younger and more casual, with an impressive denim selection. Lunch might mean a stop at Moishe’s Pippic, an old-school deli known for its pastrami sandwiches and matzo ball soup. For a sugar rush, it’s a tough choice between the macarons at Miette and a scoop of dense, velvety ice cream at Smitten, where the stuff is concocted through the magic of liquid nitrogen and a machine known as the Kelvinator. You can savor either one at Patricia’s Green, a small park that went up where the freeway once stood (earthquake damage sealed its fate). Nearby you’ll spot the newest architectural trend: shipping containers repurposed as retail outlets. Aether (which has a location in West Hollywood) artfully stacks three of them to showcase its sleek, pricey men’s and women’s outerwear. You’ve got your pick of third-wave coffee kiosks, too. There’s Ritual Coffee Roasters (swathed in corrugated metal) and at the far end of Linden Alley, Blue Bottle Coffee. Both should satisfy the most querulous of caffeine snobs—and clear your head if you sample the wares at True Sake, which stocks more than 220 varieties of rice wine. From here it’s about seven blocks west to NoPa, where you can try on Warby Parker sunglasses and ogle vintage typewriters at the Perish Trust or peruse tchotchkes and locally designed jewelry at A Rare Device on Divi-sadero Street.

Evening
Lodging options in NoPa, Hayes Valley, and the surrounding areas consist mostly of Victorian B&Bs. The best of them is The Parsonage ($220-$260); located near Hayes Valley off Haight, it’s a lovingly maintained three-story residence where breakfast includes fresh bread from the beloved Tartine bakery. The Metro Hotel ($76-$130) in NoPa is affordable and has simple, comfortable rooms, though street noise and parking can be a hassle. Speeding up NoPa’s revival is the acclaimed State Bird Provisions, whose globally influenced dishes—like duck liver mousse accompanied by almond biscuits and garlic puffs oozing with burrata—are wheeled out on dim sum carts. Book far in advance or arrive at opening to add your name to the walk-in list. About a mile away you can sip wine and slurp oysters at Bar Crudo. The cozy brasserie is right by the Madrone Art Bar, a popular neighborhood watering hole where DJs and bands bring in weekend crowds. Or hop into a cab and head back to Hayes for a show at the SFJAZZ Center. Newly opened (at a cost of $64 million), it’s the only standalone venue of its kind in the country devoted to the distinctly American art form.

Side Trip
Only 40 minutes south of San Francisco along Highway 1, Half Moon Bay offers crashing surf and stunning coastline vistas. No wonder daredevil surfers flock to Mavericks during the winter, when waves reach as high as 50 feet. For a more urban excursion, roll across the San Francisco-Oakland Bay Bridge and spend a day in Berkeley wandering Tele-graph Avenue, enjoying the view from the observation deck of the 99-year-old UC Berkeley campanile and noshing at the Cheese Board Collective.

Getting there: The one-hour flight from LAX to SFO isn’t much more expensive than the six-hour drive up the I-5, gas prices being what they are. And you avoid feed-lot stench.

Peak time: Summer is the busiest time, and June’s Gay Pride festivities are a huge draw. Held every May, Bay to Breakers, with runners in zany outfits, is a major spec-tator sport. This year May also marks the 76th birthday of the Golden Gate Bridge.

Weather report: During January, it’s usually in the 50s, but the forecast can be gray and chilly year-round. Summer temperatures rarely go above the 70s; even when the sun comes out, the wind tends to be bracing.