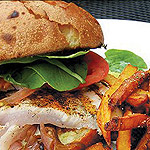 Book: The Gaslamp Quarter is touristy and besotted, but it’s got the most nocturnal energy. The century-old US Grant, sparkling from a stellar fix-up a few years back, is family friendly, while the Andaz has not-so-PG human terrariums (OK, showers) in the middle of the rooms and a new Katsuya on the ground floor.

Roam: North Park is where to find the real San Diego. Caffé Calabria roasts its own beans and serves a killer cup to have alongside your buttery croissant. A block down, The Linkery pairs famous local brews with its house-made sausages, while dishes like the Duckaroni at Urban Solace have made the place a casual hit. L.A.’s Cedd Moses is adding Seven Grand to the area’s collection of cool bars.

Enjoy: Once home to tuna fishermen from the Boot, Little Italy is lined with restaurants. The fontina-laced cres-pelle alla genovese at Bencotto is a knockout, and the new Prep-kitchen brings in the crowds. For sugary goodness, don’t pass up Extraordinary Desserts, a jam-packed house of cake worship.

While You’re There
San Diego is famous for its microbreweries, but they’re spread out. For a taste, try the three-brewery outing with Brewery Tours of San Diego. The samples are ample. Tasty, too. Just don’t expect fancy pubs. The award-winning Ballast Point, for instance, is based at a shop for home brewers. This really is about what’s in the glass. For pizzazz, reserve a tour—and a table—at Stone Brewing Co., a hoppy theme park of sorts in Escondido.