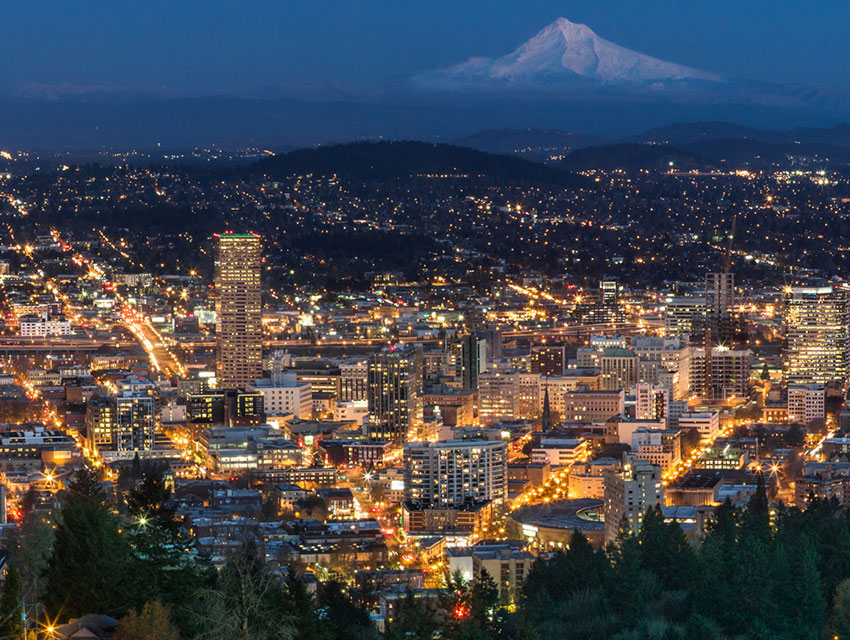 The Portland I grew up in—the Portland I left 28 years ago—was monochrome and dreary, a blue-collar river town that seemed lost in a perpetual drizzle. It still rains up there, but the home I once knew has been reborn a boutique city, indie, handcrafted, eclectic, even a bit voguish and refined. The tech boom helped fuel Portland’s fortunes, as did the northern migration of California wealth, but much of the city’s distinctiveness can be attributed to what has been held in check: subdivisions, minimalls, traffic, the disinvestment that comes with exurban sprawl. Portland has grown inward, through restoration and repurposing, getting denser, more European, each time an old precinct turns mod. It has become a city of neighborhoods—a city of Los Felizes and Silver Lakes—connected by streetcar and light-rail and bike path. If you must drive, you can still go green: The parking meters are solar powered.

»Morning
Downtown may not be especially big or tall, but it is what many cities wish for—a true center, vibrant and walkable, with at least a dozen hotels that would qualify as an ideal base. Among the newest and snazziest is the Hotel Modera (877-484-1084; $99-$500), a five-story property that I remembered as a rather unsavory Days Inn. An extreme makeover has given it a posh, futuristic appeal, with free Wi-Fi and iPod docks, suede headboards and fake mink throws. Breakfast is an institution at many of the older downtown hotels, including The Heathman (503-790-7752), where the menu offers salmon hash and Dungeness crab omelettes. Routinely ranked as one of America’s most livable cities—the fittest, the cleanest—Portland is cleaved by the Willamette River, which draws joggers and cyclists to the parkland on both sides; the Vera Katz Eastbank Esplanade, named after the former mayor (and yes, that would be Mom), is the latest addition, a 1.5-mile promenade with boat moorings and a floating walkway. When I was a kid, I would lose myself at Powell’s City of Books (800-878-7323), and that was before it had morphed into Portland’s greatest tourist attraction—a brick-and-mortar version of Amazon, with a million-plus new and used titles.

»Afternoon
There was a time when Portlanders drank working-class beer—Rainier, Blitz-Weinhard—in dingy taverns that I used to pass on my way to school. In a generation my compatriots have become connoisseurs of artisanal suds—dark, bitter, hoppy, seasonal—and their zealousness has provided the City of Roses with a couple of new nicknames, Brewtopia and Beervana. Portland will be welcoming the North American Organic Brewers Festival June 26 through 28, the Portland International Beerfest July 17 through 19, and the Oregon Brewers Festival July 23 through 26. If none of those fits your plans, stop by the Deschutes Brewery & Public House (503-296-4906), which opened last year in an old body shop and features 18 taps and a respectable elk burger with Gruyère cheese. The brewpub sits in the Pearl District, formerly a pocket of decaying warehouses that is now the hub of the arts community—and a symbol either of Portland’s renaissance or its yuppification. First Thursday approaches block-party status in the Pearl, where 40-odd galleries in roughly a half square mile host receptions on the first Thursday of the month. The district’s most historic landmark, a stone-turreted 1891 National Guard armory, is also its most modern: Portland Center Stage (503-445-3700) has found a home in the Gerding Theater at the Armory, a state-of-the-art, LEED-certified performance space that bills itself as the city’s “new living room.” In neighboring Old Town, a gas company parking lot has been converted into the Portland Classical Chinese Garden (503-228-8131), a walled oasis constructed by craftsmen from the sister city of Suzhou. Pendleton (800-760-4844) has its flagship home store nearby, a trove of fine wool furnishings, including the century-old mill’s signature Indian blankets.

»Evening
Nostalgia usually dictates my appetite in Portland, which is why no visit to the parents is complete without dinner at Jake’s Famous Crawfish (503-226-1419), where classic, uncomplicated seafood has been a fixture since 1892. The restaurant scene is anything but staid, though; fresh, organic, local, and sustainable are the buzzwords that have put the city on the gastronomic map. Bar Avignon (503-517-0808) is a smart yet spare tavern that favors Oregon pinot noirs and rustic appetizers, an unforgettable salt cod brandade among them. One of the brashest newcomers is Beast (503-841-6968), an open-kitchen, communal-seating, prix-fixe experience, where the menu, which usually boasts a foie gras bonbon, is reinvented every week. The ancient bar at Huber’s (503-228-5686) has been igniting Spanish coffees since before Prohibition. Or you can end the night by the fire pits in the Modera’s courtyard: What was once a neglected swimming pool has been filled in and transformed into a secluded patio.

Portland Flights Are Dirt Cheap Right Now, and Here’s What to Do When You Get There