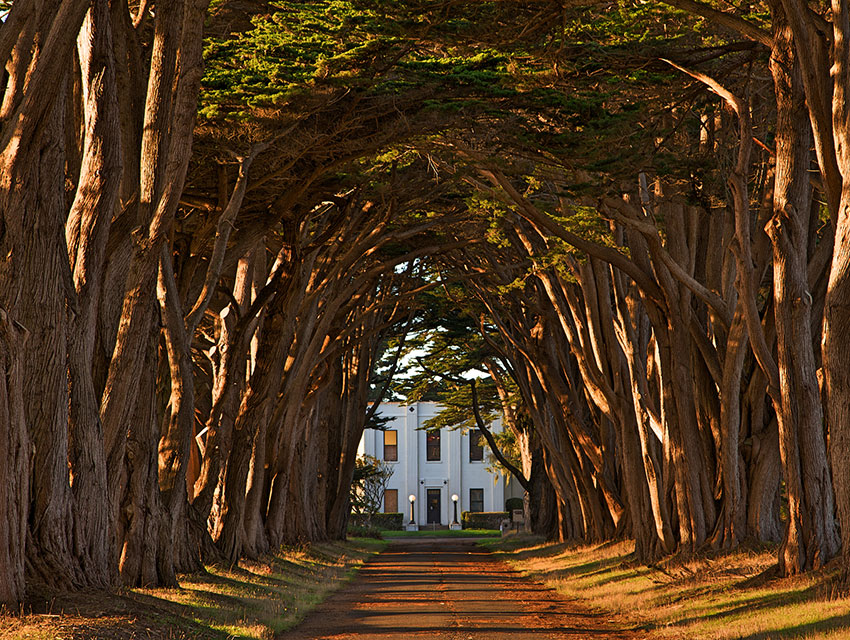 Formed by the violent intersection of the Pacific and North American tectonic plates, Tomales Bay is a thin strip of blue that separates the Point Reyes Peninsula from the mainland. Surrounding the bay are forests thick with bishop pine, bay laurel, and oak trees; gently rolling grasslands decorated with grazing elk, contented cattle, and wildflowers; and tiny communities whose residents gather for organic coffee and yoga at places like Toby’s Feed Barn. In the 1950s, developers threatened the tranquillity of it all with plans to fill the beaches with homes—in one development, 1,000 of them. The ensuing struggle to spare the area earned the peninsula federal protection. Designated the Point Reyes National Seashore, it’s just 40 miles up the road from San Francisco and one of the most diverse plots of coastline you will find.

Morning
You can see Point Reyes National Seashore from your car, but a landscape this gorgeous and accessible demands something more. Twelve miles long but just one mile wide, the placid waters of Tomales Bay are ideal for paddling, especially when enveloped in soft morning fog. Point Reyes Outdoors (415-663-8192) takes beginners sea kayaking across the bay, which is home to pelicans and egrets, bat rays and harbor seals. Before exploring the area’s hiking trails (there are many), swing by the Bear Valley Visitor Center (415-464-5100) for free maps as well as information about the tides and the flora and fauna. The two-lane Sir Francis Drake Boulevard snakes through undulating coastal grassland dotted with beef and dairy ranches that have changed little since the 1850s, when the terrain was owned by a San Francisco law firm. Off Pierce Point Road is Tomales Point Trail, a 9.5-mile roundtrip through the Tule Elk Preserve. Wildflowers such as coastal bush lupine and California poppies start blooming late in spring, and year-round hikers are rewarded with fish-eye views of the headland. Or follow Sir Francis Drake to the area’s most famous landmark, the Point Reyes Lighthouse (415-669-1534).

Afternoon
Half of California’s shellfish growers lease space on the floor of Tomales Bay, and you’ll miss out if you don’t sample the region’s oysters. Start on the drive back from the lighthouse at Drakes Bay Oyster Farm (415-669-1149). You’ll see the fishermen at work and can even shuck a few yourself. Go inland to assemble a picnic at Tomales Bay Foods (415-663-9335), a renovated barn in the town of Point Reyes Station. Inside you’ll find produce and salads, but the best reason to visit is Cowgirl Creamery. Watch cheese makers stir curd, then browse the dozens of imports as well as Cowgirl’s own aged triple creams and fresh cottage cheese. Manager Michael Zilber can help you with a wine pairing before you stroll down the street for cookies at Bovine Bakery (415-663-9420). Point Reyes Station also has West Marin’s only shops worth wandering into, among them Point Reyes Books (415-663-1542). Afterward, head 12 miles north on Highway 1 for Kumamotos at the waterfront Hog Island Oyster Company (415-663-9218) in Marshall. The picnic area is a good spot to lay out that spread you’ve packed, but in summer, make reservations. Nearby is the Marshall Store (415-663-1339), a diminutive market that serves its oysters barbecued.

Evening
Built along either side of the highway in Marshall, Nick’s Cove & Cottages (415-663-1033; rates, $165-$595) has been giving shelter to anglers for seven decades. San Francisco restaurant designer Pat Kuleto recently renovated the buildings (several rest atop pylons on Tomales Bay), balancing the obligatory fishing decor—rods, boat diagrams, weathered lanterns—with comforts like a wood-burning stove, an oversize marble bathroom, Frette bedding, and complimentary wine and chocolate. The centerpiece of the place is the new restaurant, which concentrates on seafood: Maine diver scallops, jumbo shrimp, and yes, local oysters on the half shell. Even if you’ve been eating oysters all weekend, it’s a treat to enjoy them in an upscale restaurant, on ice, complete with your waiter’s explanation of the difference between Preston Points and Marin Miyagis. There are other restaurants (the Olema Inn stands out), but after dark the narrow roads seem all the more tortuous—another reason to stay put. Leaving dinner is as easy as walking back to your cottage. The staff will bring enough wood to keep the fire going all night.

Point Reyes in 60 Seconds
Size: Point Reyes National Seashore is 71,000 acres, one-third the size of the San Fernando Valley. Most celebrated local cheese: Cowgirl Creamery’s Red Hawk. Qualities of a Tomales Bay oyster: Briny and flavorful due to the water’s high salinity. What to drink with it: Pey-Marin Pinot Noir. Whale-watching season: January through early May. Getting there: Nick’s Cove is less than two hours from San Francisco International Airport and 45 minutes from Sonoma County Airport, which is served by Alaska Airlines.