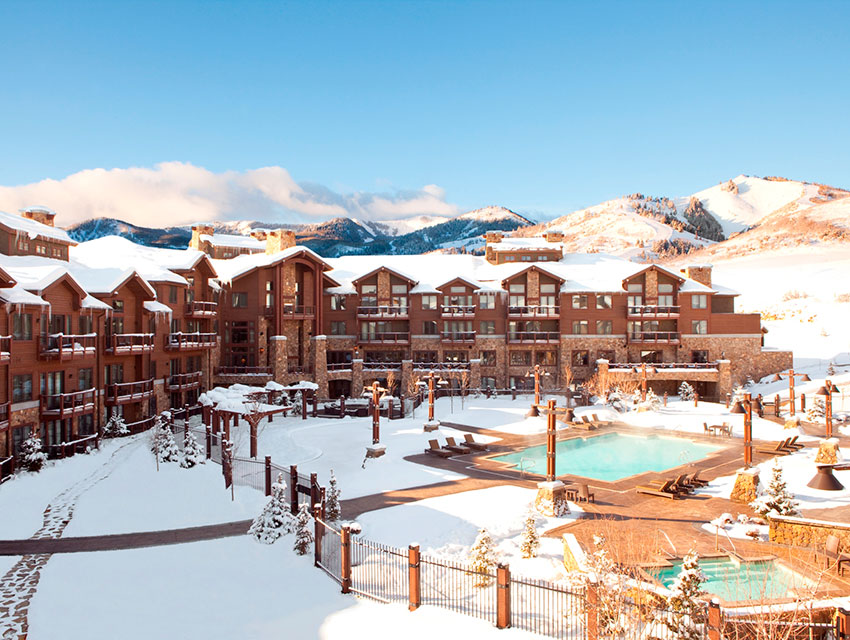 With six wives and 34 children, Utah landowner George Snyder didn’t care much for monogamy. But he did love one spot in the Wasatch Mountains, proclaiming it “Park City” in 1872. There to profit from the booming silver trade with a boardinghouse for miners, Snyder was inspired by the wildflowers. Park City reinvented itself as a ski resort in the 1960s, with skiers ascending the mountain in a cage up a mining shaft. Though the area has grown considerably more cushy since then, the past is still present downtown, whose false storefronts and Queen Anne brickwork helped it win a National Historic District designation. Just 40 minutes from Salt Lake, the town beckons city revelers on the weekends. But with three major ski resorts, Park City’s draw is the snow. That, and a little event known as the Sundance Film Festival, which rolls into town every January.

»Morning
Three big ski areas lie within a few miles of town. Park City Mountain Resort (800-222-PARK) features mostly intermediate terrain, and Deer Valley Resort (800-424-DEER) sports long, groomed runs and expert tree skiing. While the latter doesn’t allow snowboarders, the Canyons (888-226-9667) caters to them with six half-pipes, two terrain parks, and easy access to lifts. Not hungry for powder? Get a fair-trade-certified cappuccino and a crepe for breakfast at Main Street’s Java Cow (435-647-7711), where the sign on the cash register reads Lo Siento No Hablo Starbucks. Minutes from downtown, just past the family- and wallet-friendly Park City Peaks Hotel (435-649-5000; $119-$449), Utah Olympic Park (435-658-4200) helped bring the Winter Olympic Games here in 2002. After you gawk at the jumps and the two museums, take a spin on the bobsled course. The $200 tariff is high, but you’ll forget all about it as you rocket down the curving course at 80 mph with 5 Gs of force.

»Afternoon
There’s no escaping it: Main Street is touristy. But Park City’s proximity to Salt Lake City—it’s practically a suburb—has led to a ski town that’s more well rounded than most. The Kimball Art Center (435-649-8882), with its international exhibitions, three gallery spaces, and café (try the banana bread), is worthy of far bigger cities. The center’s one-day art classes, available to kids and adults, can be a happy alternative for ski-weary muscles. Up the street stands the Egyptian Theatre (435-649-9371), which puts on pop star tributes and comedies like Reefer Madness when it’s not showing movies for the film festival. Decorated with murals of pyramids and King Tut, the theater opened in 1926. The old City Hall, fire tower, and library have been turned into the Park City Museum (435-649-7457), where you can buy a walking tour booklet for $2 and feel what it’s like to use a 50-pound mine drill. Nearby Dolly’s Bookstore (435-649-8062) offers fiction and nonfiction by Utah authors, a well-stocked children’s section, and cozy chairs. Finding a lunch spot can be tricky on weekends, when locals are playing instead of working. So call ahead if you plan to try Robert Redford’s Zoom (435-649-9108), a popular spot that features regional American dishes like baby back ribs with chipotle-orange barbecue sauce and a half-pound Angus burger cooked over apple wood. To dine with the après-ski set, ride the town lift from the bottom of Main Street to Legends Bar & Grill (435-649-8111) for  garlicky hummus and a blackened shrimp salad. The seats by the fireplace go fast.

»Evening
For 40 years Utah mandated that all drinking establishments were actually private clubs; to get in, you had to become a member—usually by paying a door fee. The law was recently dropped, which means it’s a little cheaper to go hopping through the town’s dozen or so bars. The loungy Downstairs (435-226-5340) attracts a crowd with its DJs; for less scene, watch hoops on the flat-screen at No Name Saloon (435-649-6667). RiverHorse (435-649-3536) serves up live pop and jazz alongside dishes like Utah red trout and Rocky Mountain lamb. The atmosphere is more upscale at spruce (435-647-5566), where contemporary American dishes like crispy striped bass in a red wine reduction and roasted duck with orange puree and sunchokes stand out. The restaurant sits in the Waldorf Astoria Park City (435-647-5500; $299-$3,049), one of the luxe properties that compose the slopeside resort complex at the Canyons. The Waldorf’s rooms are small but elegant, with crystal, dark wood, and velvet. They’re also a short walk from the hotel’s Golden Door Spa (866-279-0843), where the Aqua Purification Ritual shower has 16 showerheads. It’s almost as cathartic as the frigid mountain air.


Park City in 60 Seconds
Getting there: It’s less than two hours by air on United, Delta, or Southwest to  Salt Lake City. Rent a car at the airport. Time to go: Some hotels drop their rates at the beginning of April, during the last couple of weeks of ski season. Pick-me-up: Salt Lake City’s Costco, about 15 minutes from the airport, sells discount lift tickets to Park City Mountain Resort ($280  for ?ve adults) and the Canyons ($115 for two adults). Newcomer: The Montage Deer Valley (435-604-1300; $845-$3,295) opened in December and o?ers ski-in/ski-out.