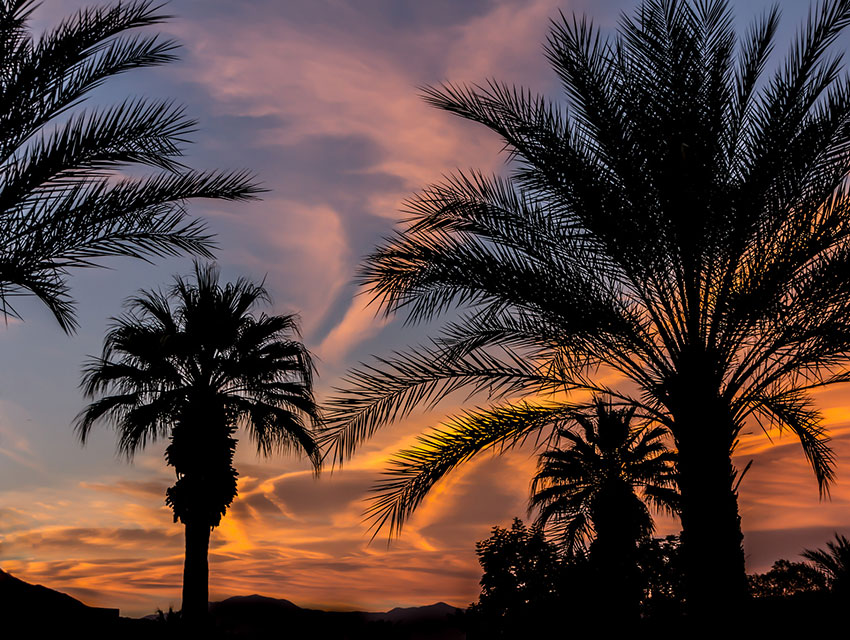 As you arc along Highway 111, the clutter of casino billboards and outlet malls gives way to an unfurling desert that surrounds Palm Springs, a town built for relaxation. Long a refuge for Hollywood types, retirees, and snowbirds, the area became something of a mausoleum for the Sinatra set, an oasis of golf courses and aging resorts strung out along the arid valley floor. But with new hotels reinhabiting famous buildings and replacing those old rose gardens with native succulents, Palm Springs has managed to reinvent itself. There’s still the great midcentury architecture, the dramatic hikes, and of course, the kitsch, but visitors are discovering cosmopolitan offerings beyond lounging in the sun by the pool or playing the back nine.

The small city sits at the northern end of the Coachella Valley, which spreads from the base of the San Jacinto Mountains—saffron-colored rocky peaks that make for a stunning sunrise and memorable hiking. You can fuel up with organic coffee and a poppy seed-sour cream muffin at Koffi (760-416-2244), a sleek coffee shop as beloved for its fair-trade brew as for its grassy courtyard. Then head for the hills. The South Lykken trail branches off from the center of town, snaking up behind midcentury landmarks like the Burgess House and the Frey II, both by Swiss émigré Albert Frey. For alpine scenery, take the Palm Springs Aerial Tramway (888-515-TRAM) to the top of Mount San Jacinto; if you catch the first weekend ascent at 8 a.m., you won’t have to share the rotating car with anyone aside from a few serious hikers. At the summit, bear right toward the wilderness trails, where you can tromp among lodgepole pines and granite boulders. The 10,800-foot peak of San Jacinto is about three hours farther along the trail, if you have the gusto, or just make the three-mile trek to Wellman Divide, which looks out on an expanse of forested ridges. The temperature is usually 30 to 40 degrees cooler here than on the desert floor, which can mean a dusting of snow on the trails.

Even locals frequent the better hotels for their sprawling spas, flashy bars, and upscale restaurants. The latest is the Riviera Resort & Spa (760-327-8311; $129-$4,800), a sparkling redo of the original spoke-wheel structure built in 1959. The building glows orange at night, curving around a desert-landscaped courtyard with a free-form pool and several fire pits. The design is over-the-top—mirrored-tile walls, a rhinestone pool table, and a color scheme in the guest rooms best described as psychedelic—and that’s the point. Grab a lobster Cobb by the pool, or head to Tyler’s Burgers (760-325-2990), a busy roadside joint. For something organic, try Cheeky’s (760-327-7595), a family-owned breakfast spot with a playful menu (“flight” of bacon, anyone?). Some of the biggest names in modernist architecture honed their craft in the neighborhoods surrounding downtown Palm Springs. The city is almost completely flat, with streets four Cadillacs wide—ideal for seeing the sights by bike, especially in winter and spring. Big Wheel Tours (760-802-2236) can provide you with a bicycle, and the visitors’ center (800-347-7746 or palmsprings.org) sells a “Palm Springs Modern” map highlighting where to find “Swiss Miss” A-frames by Charles DuBois, the Kaufmann House by Richard Neutra, and homes by William Cody. There’s more midcentury design to ogle along the “Uptown” stretch of North Palm Canyon Drive, which is lined with such vintage furniture stores as Dazzles (760-327-1446), a courtyard motel turned carnival of ’50s bamboo stools, Danish side tables, and costume jewelry.

Palm Springs has long existed in a food vacuum: Folks here love their steak and salmon. Some new chefs, though, are expanding the options. At the swank Purple Palm in the remodeled Colony Palms Hotel (800-557-2187), James Corwell works a daily-changing menu that emphasizes farmers’ market produce and proteins like squab, wild California sea bass, Santa Barbara prawns, and Colorado lamb. Less lavish is The Tropicale (760-866-1952), a throwback-themed restaurant and lounge that serves old-school pupus and has maybe the last bar in these parts to pour authentic tiki drinks. The place turns into quite the locals scene later in the evening, but get a seat on the back patio early and you’ll have a perch to watch the action. It’s unusual to find much going on past 12 in this town, making the late-night crowds at the Riviera Resort’s outdoor Bikini Bar (named for the “uniforms” worn by the cocktail waitresses) feel that much more happening. Recline by a fire pit and sip one of the bar’s 50 rare rums or tequilas. Oh heck, you’re on vacation and mere steps from your room—try them all.

Where: An hour and a half east of L.A. on Interstate 10. February temp: Between 45 and 74 degrees.Soak: Nearby Desert Hot Springs boasts the region’s best mineral pools. Two Bunch Palms (760-329–8791), which has a grotto, accepts walk-ins. Flashback: Lyons English Grille, where the dining room is straight out of the ’70s—in all the best ways. Happening: February 13 to 21 is Modernism Week, which celebrates modernist architecture with historical home tours, lectures, parties, and more