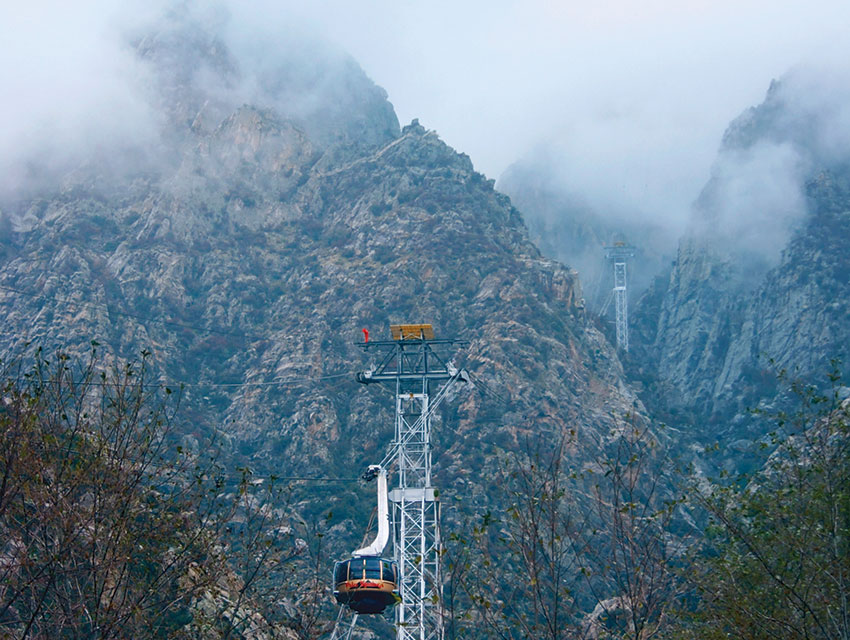 Your boots make a satisfying crunch as they break through the icy snowpack atop Mount San Jacinto. From 8,515 feet up, the towering windmills you drove past along the 10 have shrunk to pinwheels. Golf courses lie across the desert’s rusty expanse like fat caterpillars, the Salton Sea reflecting in the distance as you tromp through the Jeffrey pines and white firs that sprout among fields of boulders cloaked in white. Up here, on what should be a thoroughly touristy outing, awe sets in, with the mountain and Palm Springs all the more miraculous in the context of each other. You were smart enough to catch the revolving Palm Springs Aerial Tramway’s first two (slow) rotations of the day. At 8 a.m. your only companions for the ten-minute, one-mile voyage were a few die-hard snowshoers and a dozing Peaks restaurant cook on his morning commute.

The vacationing throngs in tour buses below won’t make it up for another hour. By then you’ll be sailing down, gradually shedding layers of clothing until eventually you’re in your swimsuit beside the saltwater pool of the 17-room Del Marcos Hotel ($134-$328). Designed in 1947 by William Cody, the property underwent a complete redo last year and holds the honor of being one of the only hotels in the area to play period music by the pool. From beach weather to arctic conditions and back again—it’s not your last space-time shift today. During dinner at Workshop Restaurant + Bar, you savor the pickled cauliflower florets dotting your octopus carpaccio and the bits of chewy red rice in the shaved fennel salad. Once the waiter delivers the old-school rum punch bowl to the table, you’ll swear you’ve been teleported to L.A.