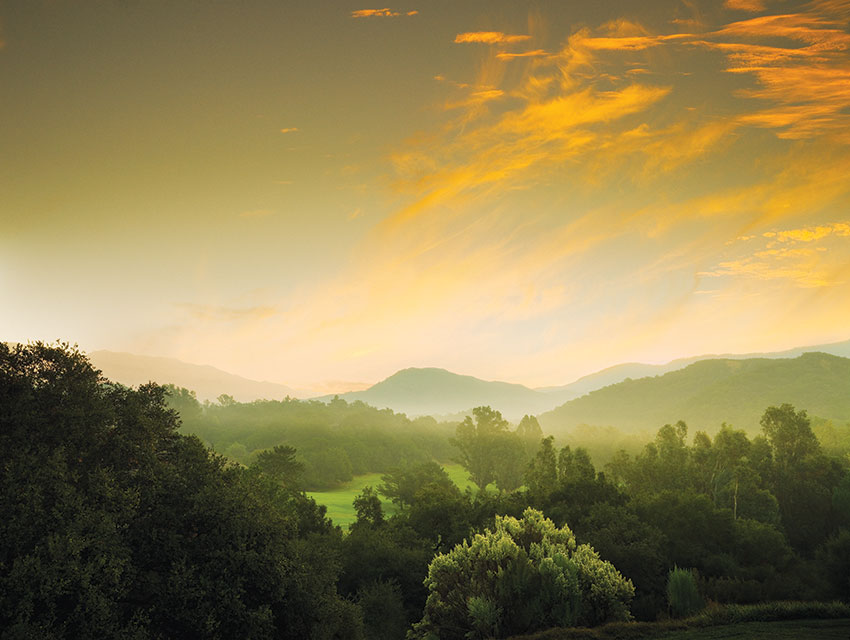 You can huff along sage-covered slopes or swing a 9-iron, seek heat therapy in a sauna or search for inner peace on a mountaintop. More than anything, though, Ojai will take you away from where you are right now. Long an artist colony (the ceramist Beatrice Wood lived here), a spiritual retreat, and a hippie haven, the Ventura County hamlet started off in the 1870s with the name Nordhoff, in honor of travel writer Charles Nordhoff. After a fire razed the place in 1917, it was rebuilt as a Spanish revival village by the Ohio glass magnate Edward Libbey, who helped rechristen it Ojai, a moniker the Chumash Indians had given to the surrounding valley. The town is famous for its summer music festival and Playwrights Conference, but now is the time to enjoy a little elbowroom before you get swept up in the holiday rush.

»Morning
Days begin early in Ojai, with locals and visitors fanning out in the crisp morning air. At Knead Baking Company, on Ojai Avenue, the town’s main drag, people queue up for warm apricot scones, sourdough bagels, and fair-trade coffee. The artisanal bakery also runs a stand at the Ojai Certified Farmers’ Market, which takes over a parking lot on Sunday mornings. After sampling the locally grown avocados and Fuyu persimmons, join the joggers and dog walkers for a stroll on Shelf Road Trail, a one-and-a-half-mile path. There’s only the occasional incline but plenty of dramatic vistas of the valley, its patchwork of citrus and olive groves spreading to the southern edge of the Los Padres National Forest. Nine varieties of olives, from the Italian Frantoio to the Spanish Lechin de Sevilla, will be harvested this month at Ojai Olive Oil (805-646-5964). Owner Ron Asquith provides informal private tours of the farm, plucking at branches as he leads the way to the olive press and tasting room, where you can sample peppery oils.

»Afternoon
Back in town, look for the shops and restaurants that line the Arcade, its colonial archways swooping along Ojai Avenue. Snag a table on the patio at Vesta (805-646-2339), a home accessories store and café crowded with patrons digging into chopped salads and pesto aioli-smeared panini. Or pack a lunch and sit under an oak at Libbey Park, whose band shell (which is being renovated in preparation for the music festival in June) has hosted such luminaries as Igor Stravinsky and Aaron Copland. Rainbow Bridge (805-646-4017), the local organic grocer, puts together a respectable sprout-laden avocado melt, and right beside the park is the newly opened Kingston’s Candy (805-646-1500), with retro favorites like Razzles, Oh Henry! bars, and Atomic FireBalls filling its shelves. Afterward you can drop by the galleries dotting Montgomery Street. Frank Massarella, owner of Firehouse Pottery (805-646-9453), runs a clay school in the back room, so don’t be surprised to see potters at the wheel while you browse the burnt orange platters and pale blue bowls. From there make the five-minute drive to the Ojai Valley Inn & Spa (800-422-6524; $300-$1,500), with its elegant terra-cotta-tiled Spanish revival buildings. The inn’s 18-hole, par-70 golf course (by George C. Thomas Jr., who designed the L.A. and Bel-Air country club courses) is a major draw, despite the $180 greens fee. So is the hotel’s 31,000-square-foot spa, where the Kuyam treatment combines mud masks with a dry heat chamber followed by a guided meditation. You’ll find a cozier setting at Su Nido Inn (805-646-7080; $179-$359), a nine-room mission revival-style hotel with plush beds, mosaic-tiled bathrooms, and a fountain splashing in the courtyard. Located on the corner of a tree-lined street, it’s a quick walk from the Arcade.

»Evening
As the sun begins to drop, wait for Ojai’s legendary “Pink Moment,” when the Topa Topa Mountains are suffused in, well, pink light. One of the best vantage points is ten minutes by car up Reeves Road, in the serene garden of the Meditation Mount. In such a sleepy town (part of Ojai’s appeal), lingering over dinner and a bottle of wine is almost obligatory. For finer dining, sit on the wisteria-fringed front porch at Suzanne’s Cuisine (805-640-1961). Suzanne Roll and her daughter, Sandra, showcase their Italian and Provençal leanings with a seasonally driven menu that might include squash blossoms, heirloom tomato salad, and scallops caught daily in Santa Barbara. Azu (805-640-7987), a dimly lit tapas bar and restaurant across from the Arcade, serves small plates like grilled artichokes and chorizo-stuffed dates. The wine list features bottles from various corners: Rioja, Piedmont, Yountville, and of course the Ojai Valley. Barrel 33 (805-646-1555) is an art-filled wine bar where small bands work the mic on weekends. Once you’ve finished your glass of pinot noir, saunter through the quiet night back to the Su Nido. Most rooms come with a private balcony or patio, ideal for stargazing. You’re in the country, after all.

The basics: Fifteen miles from the beach, the town of Ojai has a population of 8,202. Daytime temperatures hover in the low to mid 70s in November but can drop 30 degrees at night. Saddle up: Ojai on Horseback (805-509-3991) specializes in guided trail rides throughout the area, from the Shelf Road Trail to the nearby Ventura River Preserve. Touch of class: Sign up for a two-hour cooking lesson at the Ojai Culinary School, run out of the French cottage-inspired Lavender Inn (877-646-6635). Moving on: For a longish hike or bike ride, follow the Ojai Valley Trail, which you can access near the Su Nido and follow to the coast.