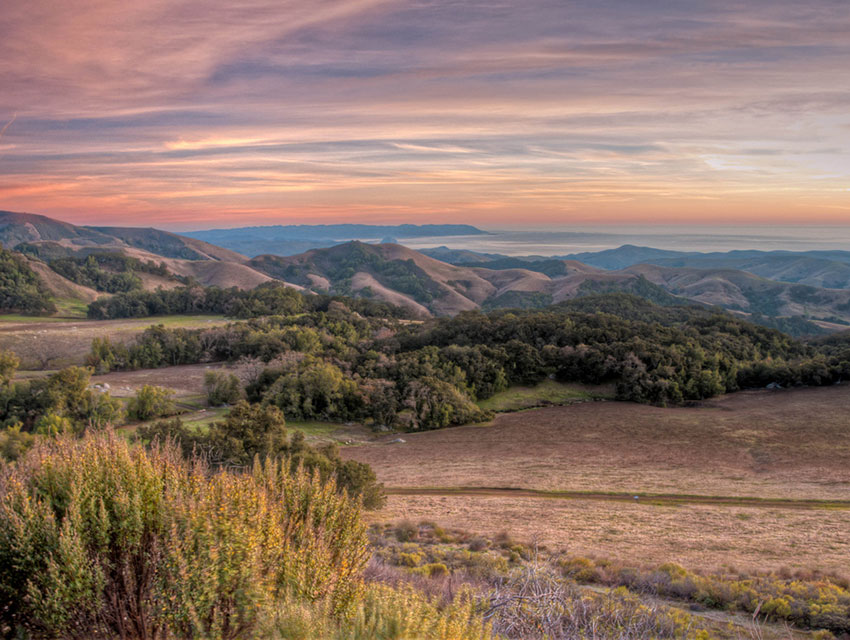 Driving around the vineyards of Paso Robles is like turning the pages of a Steinbeck novel. Narrow roads wind through countryside where hills of golden barley stretch out from rows and rows of green grapevines. So much valley oak, blue oak, and live oak give shade to the sun-drenched area that it was first named El Paso de Robles, or “the Pass of the Oaks.” Downtown Paso, incorporated in 1889, is picturesque, with a central plaza and small businesses with names like Hometown Nursery and Melody Ranch Motel. But the area is changing fast: High-end shops, storefront tasting rooms, and serious-minded restaurants seem to pop up every month, and the number of wineries is exploding—170 at last count. To enjoy the essence of Paso, its mix of rural charm and wine-country sophistication, best pack your bags right now.

Morning
Days unfold slowly here. Breakfast at the new boutique Hotel Cheval (805-226-9995; $245-$425) is a complimentary basket of sweet cinnamon and blueberry cakes set outside your door or on weekends a hot buff et at the Pony Club’s horseshoe-shaped bar. Named after famous racehorses, the 16 rooms, most with fireplaces and all with warm, contemporary European touches, ring a courtyard that doubles as a lounge. The staff—helpful without being overbearing—will point out favorite vineyards in the free Paso Robles Wine Country guide, which lists more than 100 wineries and includes a map. The staff can also arrange a limo or car service for the day. At around ten, when the town starts coming alive, head over to Odyssey World Café (805-237-7516 and order some sandwiches and wraps to go for an afternoon picnic. (Many of the vineyards that don’t feature picnic grounds provide shaded tables or benches.) If morning is too early for wine, start your tour of the area at the family-run Willow Creek Olive Ranch (805-227-0186), a 45-acre island of olive trees amid the grapes. Tasters at the 2007 International Olive Oil Competition in Los Angeles awarded the ranch’s Pasolivo oils two best-in-show awards. Try for yourself, and while you’re there, ask to see the press, which runs during harvesttime, in late November and early December.

Afternoon
The 101 slices through the center of Paso, which became full-fl edged wine country about 30 years ago with the introduction of irrigated grapes. Some notable tasting rooms on the west side include L’Aventure Winery (805-227-1588), which is known for cabernet sauvignon and Syrah blends, and Lone Madrone (805-238-0845). There you can browse through hundreds of herbs organized in groups such as “medicinal,” “culinary,” and “basils” and get some for your garden. Linne Calodo Cellars (805-227-0797) specializes in Rhône and zinfandel blends. Some of the region’s most celebrated varietals—cabernet sauvignon and Syrah—come from Justin Vineyards & Winery (805-237-4149), where the tasting room bustles. In cooler months, alfresco lunch at the winery’s restaurant is pleasant, though the menu leans toward heavy choices like filet mignon and fettuccine with cream sauce. Reservations are recommended. On the east side of Paso, don’t miss Silver Horse Winery (805-467-9463). Views from the grounds go on forever, and the recently renovated hacienda-style tasting room is one of the nicest, in part because vintner Stephen Kroener makes you feel so welcome. For a diversion, drive ten minutes north to Mission San Miguel Arcangel (805-467-3256). It was founded in 1797 by the Franciscans, who introduced grapevines to the region. The 2003 earthquake closed most of the mission to the public; the outside is in disrepair, but the interior courtyard and padre’s quarters warrant a self-guided tour.

Evening
There is a movie theater on the square, but the main activity at night is eating. Hotel Cheval’s Belgian draft horse, Chester, will pull your carriage across the park to Paso’s recently opened contemporary American restaurant, Artisan (805-237-8084). The wild-caught and sustainably farmed fish are fl own in daily, and the meat is antibiotic and hormone free. Don’t leave before tasting the warm Scharff en Berger chocolate brownies with homemade Guinness ice cream. For early-California cuisine accented with moles, tomatillo salsas, and piquillo peppers, try Villa Creek (805-238-3000), which offers a wine flight with your meal. After dinner, stroll to the Crooked Kilt (805-238-7070), where a DJ or band pumps up the decibels in the indoor-outdoor pub, or walk back to one of the hotel’s outdoor couches to soak up the quiet night.