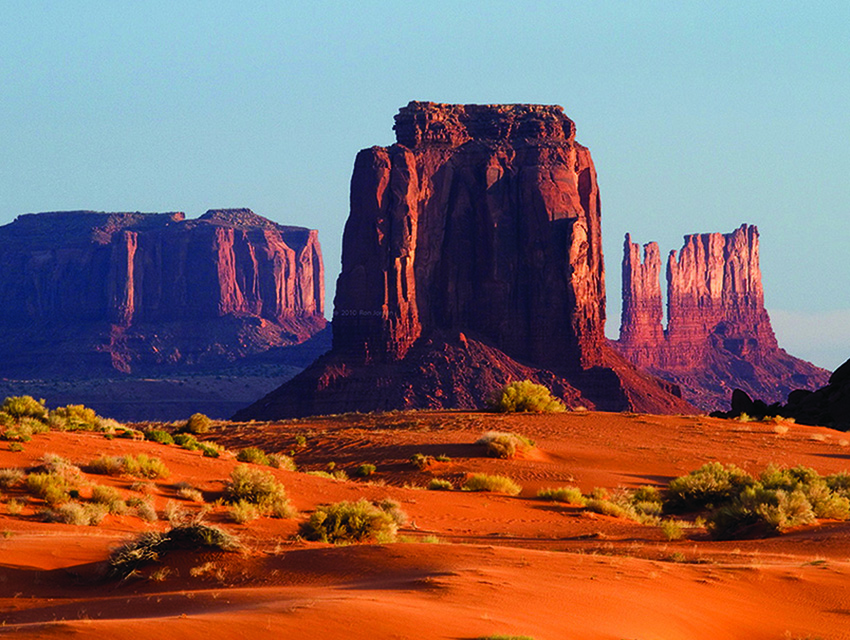 Decades of westerns and car commercials have turned the red sandstone formations of Monument Valley into landscape Muzak. To overcome that effect, there are Navajo-led tours exploring—sometimes on foot—remote areas of the tribal park on the Arizona-Utah border, such as Mystery Valley and Hunt’s Mesa, where guides help illuminate the terrain’s sacred meaning. You can also drive the park’s jarring 17-mile rock-strewn sand and dirt road (preferably in a high-clearance vehicle or a low-priced rental). Or trek around West Mitten Butte on the 3.2-mile Wildcat Trail, the only route open without guides. But I like to reset my perspective at Muley Point, about 40 miles north. Past the town of Mexican Hat, Highway 261 passes Valley of the Gods, a mini-me Monument Valley, before zigzagging up the graded dirt Moki Dugway to the top of Cedar Mesa, as road signs warn of 10 percent grades and 1,100-foot drops. Muley Point looks across the serpentine bends of the San Juan River’s striated Goosenecks and out over the plains to the formations, revealing Monument Valley as just one part of a vast panorama that encompasses the Navajo world.

Follow the map
In big country, small screens simply won’t do. Spread out the Automobile Club of Southern California’s Indian Country map in all its 33-fold glory, and you’ll get an incomparable overview of the Southwest. The obscure geographic details may just entice you to hit the back roads to see what’s happening over at Egg Nog Springs or Rotten Bananas Butte.

Where to stay
Lodging in Monument Valley has never been plentiful. For decades, Goulding’s Lodge, with its trading post museum and well-worn rooms, has been a staple. While the vistas are dramatic, even they can’t compete with those of the View Hotel ($99-$329). Opened in 2008 by Armanda Ortega, whose family’s roots in the Navajo Nation run deep, it sits in Navajo Tribal Park. Every room’s balcony faces the Mittens and other iconic buttes. There are campsites and cabins, too.

What to eat
Navajo fry bread
A pleasantly chewy dough patty that’s been puffed up in boiling oil, Indian fry bread was likely born of the rations provided to the Navajo by the U.S. cavalry during the forced relocation to New Mexico. Whether you get yours as a taco or with a simple dollop of honey, it’s best sampled within sight of a rusty butte or two.

An Insider’s Guide to the Great Southwest