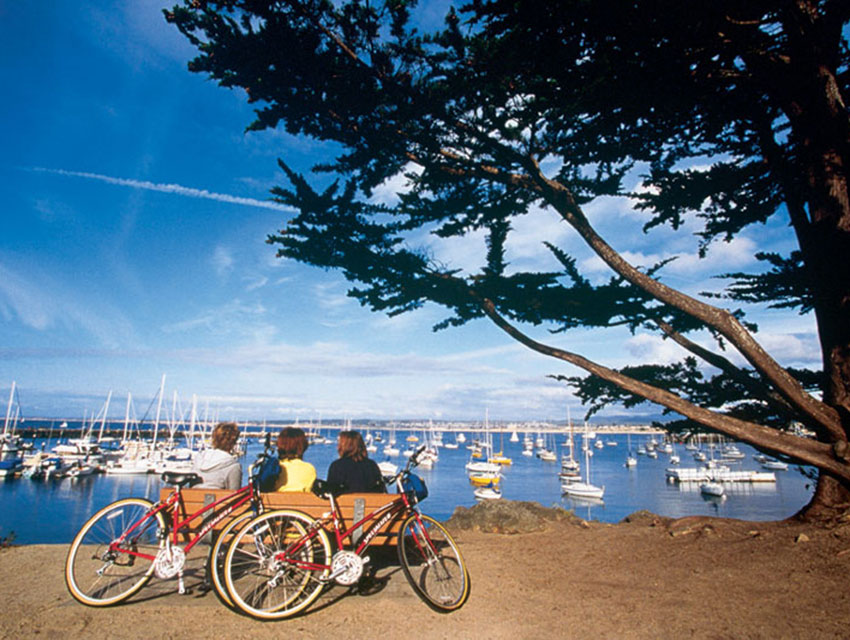 Long before Jimi Hendrix became a rock god by setting his guitar on fire at the Monterey Pop Festival, before John Steinbeck glorified the sardine factories of Cannery Row, Monterey was a rugged coastal outpost. Founded by Franciscan friar Junípero Serra and Spanish explorer Gaspar de Portolá in 1770, the onetime hunting grounds of the Ohlone Indians served as the capital of the Spanish province Alta California. A couple of hours south of San Francisco, today’s Monterey revolves around tourists, who are lured by the world-famous aquarium and humbling views of the Pacific Ocean. Despite the hubbub, the former mission town has managed to preserve its historic character, lending it an unassuming charm.

Morning
It’s tough choosing between fluffy, Frisbee-size banana pancakes and an artichoke scramble at the Old Monterey Café, an all-American diner on downtown’s low-key main drag. (When in doubt, order anything that comes with salsa.) If it’s too crowded, head for nearby Red’s Donuts, where regulars plant themselves at the counter with a maple bar and a cup of joe. Since you’re in the area, take a self-guided walking tour of the town’s 19th-century adobes. Start at the lovingly restored Cooper Molera Adobe, which has living history demonstrations and a gift shop that replicates a mid-1800s general store. A free brochure will lead you to nine other adobes, including Stevenson House, where ailing writer Robert Louis Stevenson, then unknown and penniless, was nursed back to health. (Rumor has it that Monterey inspired Treasure Island.) Along the way, grab a white chocolate mocha, the specialty drink at East Village Coffee Lounge, and a freshly baked fruit tart at Parker-Lusseau Pastries. If you have a half hour to spare, stop in at the Monterey Museum of Art, which is small but has a respectable collection of early California paintings and photographs.

Afternoon
Cannery Row may attract the biggest crowds, but a walk along the planks of the pier at Fisherman’s Wharf—and an order of calamari at Abalonetti Bar & Grill—is a must. From here you can hop on a boat to go whale watching. Trips are offered year-round by several vendors, but the ideal period is from mid-December to mid-April, when gray whales travel 12,000 or so miles between Baja and the Bering Sea. About a mile from the wharf you’ll come across the Monterey Plaza Hotel & Spa ($200-$500). It’s well appointed and far enough from the action that you can sleep quietly. But the property is still within easy reach of the heart of Cannery Row. Though it’s mostly full of interchangeable souvenir shops, if you squint at the vintage brick buildings, they still evoke the days when Sicilian fishermen helped make this the sardine hub of the world. The strip terminates at the north end with the Monterey Bay Aquarium, where the kaleidoscopic displays of aquatic life are well worth an afternoon. After exploring the kelp forest and cooing at the penguins, drive up the hill to Compagno’s Market and Deli. At this neighborhood favorite near the Presidio the only thing larger than the stacked Italian subs are the towering slices of cake. Back on Cannery Row you can rent a bike and pedal to Pacific Grove along the Monterey Bay Coastal Recreation Trail. It’s an easy mile, but if you want to rest, visit Happy Girl Kitchen Co. for a cup of Blue Bottle coffee, the daily sandwich special, or a jar of house-made marmalade. Known for its gorgeous Monarch Grove Sanctuary, where migrating monarch butterflies seek shelter every winter, Pacific Grove is also a haven for thrift store habitués. The best is the high-end Reincarnation Vintage Clothing, which stocks dresses, handbags, and hats from the 1920s through the ’70s.

Evening
Though it borders Monterey, Pacific Grove and the quaint Victorians that dot its downtown area can seem worlds apart. For seafood paella and white tablecloths, there’s Fandango, but foodies flock to Passionfish, where scallops are served with tomato-truffle butter and the pork cheeks are braised. Or have a Moscow Mule and a bowl of abalone bisque while you sit in the massive, glass-enclosed conservatory at the formal Sardine Factory in Monterey. On the opposite corner you’ll find 73 taps at Cannery Row Brewing Company. The most stylish spot, however, is in Old Town at Restaurant 1833, a New American joint with a formidable cocktail menu. The fare is hearty yet elegant—bacon-cheddar biscuits with maple-chili butter, crisp hen egg with prosciutto—and the vibe welcoming. It’s a different scene at Alfredo’s Cantina, a dark little cave of a bar that caters to locals and offers some fine people watching. When the day is done, check in at the Jabberwock Inn ($169-$309), an Alice in Wonderland-themed B&B that’s quirky and cozy without being twee. Sitting high on a hill, it offers striking views of Monterey Bay, which you can gaze at before you slip down the rabbit hole.

Getting There: Monterey Regional Airport has direct flights to and from LAX, or you can fly into San Jose (70 miles north) and drive down the 101. Peak Time: Late summer and early autumn are the busiest seasons. In mid-August the Pebble Beach Concours d’Elegance features meticulously restored classic cars on meticulously groomed golf links. In late September the Monterey Jazz Festival draws more than 40,000 attendees. Weather Report: Bring an umbrella. Even on a hot summer day you might feel a sprinkle of rain. During winter, bundle up against the damp and the fog. Side Trips: Though Steinbeck made Monterey famous, he was born and raised in nearby Salinas, which honors the author’s legacy at the National Steinbeck Center, one of America’s premier literary shrines. Swing by Castroville, the globe’s artichoke capital, for a plate of fried thistles at the Giant Artichoke Restaurant. In the much tonier Carmel-by-the-Sea, about five miles south of Monterey, stop at one of the bistros or galleries.