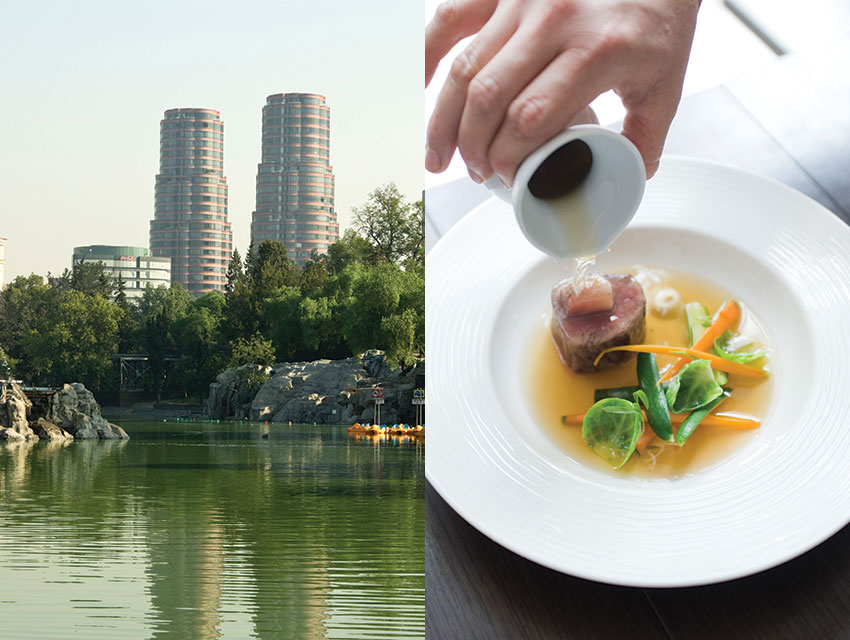 The moment you arrive at Benito Juárez International Airport, Mexican culture reveals its contrasts—high versus low, ancient versus contemporary, refined versus rustic—one colonia at a time. Less than six miles west of the historic center you’ll find the Condesa, Roma Norte, and Polanco neighborhoods, which are celebrated as art and dining destinations. Known locally as “D.F.” (federal district), Mexico City is populated by ambitious urbanites who are as equally at home in its ultracool mescal bars as they are among its ubiquitous street vendors. In the world’s tenth largest metropolis (Los Angeles is number 17), every zone offers its own discoveries.

Morning
Any journey into Mexico City should begin at the Centro Histórico, which was built on the destroyed Aztec capital of Tenochtitlán. Construction on the Zócalo started in the 16th century; the public square, which hosts expos and concerts, is fronted by the Palacio Nacional, a sprawling government complex where murals by Diego Rivera line the main stairwell and second floor. All around, the New World crashes into the Old; walk one long block north through a street packed with dancers, shamans, and vendors hawking pre-Hispanic food to view Aztec ruins in the Museum of the Templo Mayor. After you’ve admired artifacts from the stunning temple, try a traditional breakfast of poached eggs in a spicy bean casserole at Restaurante El Cardenal while gazing through the stained-glass windows of the elegant French-Porfirian building. For stand-up dining, hoof it a few blocks south and pick up some tacos de canasta (they’re filled with green mole and steamed in a basket) at El Flaco, a family-run stand that’s been in business for 53 years.

Afternoon
At Museo del Palacio de Bellas Artes, the fine-arts institution just west of the historic center, check out murals by José Clemente Orozco and David Alfaro Siqueiros (whose mural on Olvera Street in downtown L.A. was famously restored). For a sweet stop, the churros at 79-year-old Churreria El Moro are accompanied by four types of hot chocolate. Each neighborhood’s daily life centers around its markets. In addition to meat, seafood, cheese, and produce, the Mercado San Juan, about a mile west of the Zócalo, abounds with small restaurants and roving vendors hawking regional specialties like tlacoyos, torpedoes of blue masa filled with sausage and brisket. Outside the market at the pub Las Duelistas, you can sample pulque, a pre-Hispanic liquor made from fermented agave sap. As you move west from the historic center (take a cab), three centuries of baroque colonial architecture give way to the revolutionary monuments and office towers of Paseo de la Reforma, Mexico City’s Champs-Élysées. Keep going southwest and you’ll hit Roma Norte and Condesa—fashionable neighborhoods alive with art deco and streamline moderne buildings—and Polanco, a popular destination for international shoppers. At the intersection of these districts you’ll come upon Bosque de Chapultepec, the vast hilltop park. Take in the city while pedaling a boat on one of its two lakes, or choose among its numerous other attractions: an amusement park, a zoo, a castle, and museums. From there it’s a quick cab ride to Restaurante Bar Montejo, one of the city’s great cantinas. Soak up local beers as you sample complimentary Yucatecan botanas (appetizers) like suckling pig. There’s a three-drink-per-person minimum—but who’s counting?

Evening
From upscale boutique hotels to converted antique mansions, there are plenty of lodging options in Polanco. Before a big night, relax with a free massage at Las Alcobas ($317-$542), where a spiral staircase leads to luxurious midcentury rooms. Up the street, the ultraminimalist Hotel Habita ($224-$338), with its rooftop pool, is another chic alternative. Both are within walking distance of terrific restaurants like Biko and Pujol. Mescal, the Mexican liquor distilled from agave, is in fashion in the cultural corridor of Roma Norte and Condesa. La Clandestina brings in rare, unmarked distillates from Oaxaca and other states, and at El Palenquito a giant stone wheel from a shuttered distillery serves as a table. After sipping mescal with the locals, head to chef Jorge Vallejo’s Quintonil (you need reservations) for an extravagant comida corrida. The prix fixe meal features such locally sourced ingredients as squash in a velvety mole and pulque-marinated brisket. Jair Téllez’s MeroToro might be the hottest ticket in town; his superb version of Baja-style surf and turf translates into octopus sprinkled with blood sausage and cocktails of sea urchin and gooseneck barnacles. The intimate supper club Zinco Jazz is a sublime spot to finish the evening. Fresh Mexican jazz riffs blend with Aztec rhythms, evoking the contrasts of a city where ancient history is the backbeat of daily life.

Forty minutes: South of downtown, the Native American stronghold of Xochimilco spotlights indigenous culture and cuisine. At Xochimilco Ecological Park you can ride through the canals of the former Aztec empire on a trajinera, one of the brightly painted vessels that embark from nine piers. While listening to a song sung by a floating mariachi, order an ear of roasted Mexican corn and a michelada (a beer cocktail) from one of the smaller boats that bring life and color to these waters.

Getting There: Several U.S. airlines offer direct flights from LAX to Mexico City (about four hours). Or try Aeromexico, the country’s national carrier, or Volaris Airlines, the JetBlue of Mexico.

Peak Time: September to January is the busiest season; the number of visitors peaks at Christmas and again during Semana Santa, the Holy Week leading up to Easter. The Festival de México in mid-March, featuring some 60 cultural events around the city, is another major draw.

Weather Report: The climate is agreeable year-round, with summer being the rainiest season.