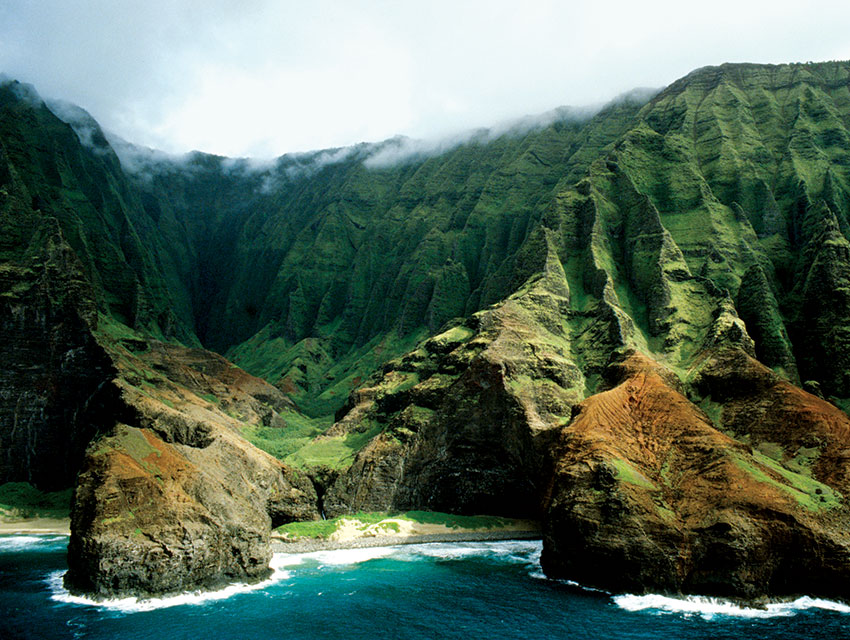 The oldest of the Hawaiian Islands, Kauai is where to go if Maui feels overdeveloped but you still want to keep your toes in civilization. The island has a homey feel; you’re often playing side by side with the locals (residents get a kama’aina rate at the many golf courses), who are just as into the bountiful flora and fauna as you. The rainy north shore—not to be confused with the storied surf spot on Oahu—is a jungle land that revolves around the tiny town of Hanalei, with its cluster of boutiques and cafés housed in mossy wood buildings. The hot, dry south shore hugs Poipu, with its spiffier stucco retail complexes and L.A.-size restaurants. At the island’s center is the wild Koke’e State Park. Kauai is small; plan right, and you can hit most points on the compass in a day.

»Morning
The grounds of the Grand Hyatt Kauai Resort and Spa (808-742-1234; $440-$880) at Koloa are a 52-acre Shangri-la of hammock-draped gardens and waterfall-fed pools that meander like lagoons. It’s a great place to jell out after exploring the island. Start by watching the birds greet the sun at the Kilauea Point National Wildlife Refuge (808-828-1413) toward the island’s northern end. Early risers can grab a No Nuthin Muffin—no glucose, gluten, dairy, eggs, or yeast—lilikoi lemon bar, or haupia éclair at the Kilauea Bakery (808-828-2020) on the way to the preserve, home to comical red-footed boobies and piratical frigates. The prenoon hours, before the winds ruffle the waters, are also the best time to swim with the fish. Poipu Beach Park is much like its southern environs, a gentle bay where it’s easy to search for Moorish idols and hallucinogenic wrasses. There’s also primo snorkeling at Ke’e Beach in the north, though sharp rocks and stormy weather inform the adventure. You’ll appreciate the sugar rush that much more at Dizzy Lizzie’s roadside van there, from which the baker sells praline-crisp macadamia nut cookies. For hiking in a dramatic landscape, head to Koke’e State Park; you can ramble along the red rim of Waimea Canyon or commit to a fully outfitted foray on the mercurial Napali Coast for hours and hours.

»Afternoon
The St. Regis Princeville (808-826-9644; $850-$6,575) has cliff-top views of Hanalei Bay, an elegant Hawaiiana look that’s the result of a two-year makeover, and rates that scream special occasion. It’s also adjacent to the Prince golf course (808-826-5001), Robert Trent Jones Jr.’s mind-bending creation (he embraced all the natural obstacles), with fees to match, so it’s best played after lunch, when the discounts kick in. The lines are visible from the Kuhio Highway for Ono Char-Burger (808-822-9181), where fresh-ground patties come smoking off the grill. In the hamlet of Hanalei, the rich crab roll at Dolphin Fish Market (808-826-6113) has a following among the surfers who ride the giants in the basin beyond the pier. Closer to shore, the pier offers the island’s equivalent of the easy-to-master waves at Waikiki. Boards and lessons are available from Hawaiian Surfing Adventures (808-482-0749) at its neighboring camp. Overlooking the Kiahuna Golf Club down south, Joe’s on the Green (808-742-9696) serves addictive, low-priced fries and ribs that bring in the locals. On the way there, those who like their water flat should stop where the Wailua River crosses under the highway midway between Hanalei and Poipu. Kayak Wailua (808-822-3388) can get you the appropriate transport to paddle up to the 100-foot “secret” waterfall.

»Evening
Kauai is an early-to-bed, folksy place, which makes the evening meal the height of the nightlife. You can drop a mint at destination spots like Roy’s or the Beach House, but the Hukilau Lanai (808-822-0600) in Kapa’a turns out seafood dishes as fine as its pricier competitors and boasts a bargain wine list of bottles under $20. For an artisan sensibility, there’s Bar Acuda (808-826-7081) in Hanalei, which specializes in island-style tapas: ono in a demi-glace with oyster mushrooms, skewers of beef flavored with local honey, a pizzetta topped with corn and bacon. If the bar’s Cal-heavy wine list proves too steep, head across the street to the trapped-in-amber Tahiti Nui (808-826-627) for live music and cheap beer. The Grand Hyatt stages a two-hour show of Hawaiian dance, music, and lore nightly on its spectacular Seaview Terrace, with children performing the hula on Tuesdays and Saturdays. Enjoy a postshow cocktail at the nearby Plantation Gardens bar (808-742-2121), which features such idiosyncratic mixes as a lychee and pear vodka cosmo and a lavender piña colada. But with skies this dark—a by-product of the island’s lighter development—why not take in a little stargazing?

Kauai in 60 Seconds
»Island fever: While Kauai doesn’t have a rainy season, it does have a rainy side: the north. Turn key: Condos are a popular alternative to hotels; R&R Realty & Rentals in Koloa (808-742-7555) excels in south shore sites. Cook’s tour: Farmers’ markets are held every day of the week except Sundays. The best is noon Mondays at the Knudsen Ball Park in Koloa. Da kine, brah: You’ll know you’ve finally got the no-worries aura when the locals address you in pidgin, of which you won’t understand a word.