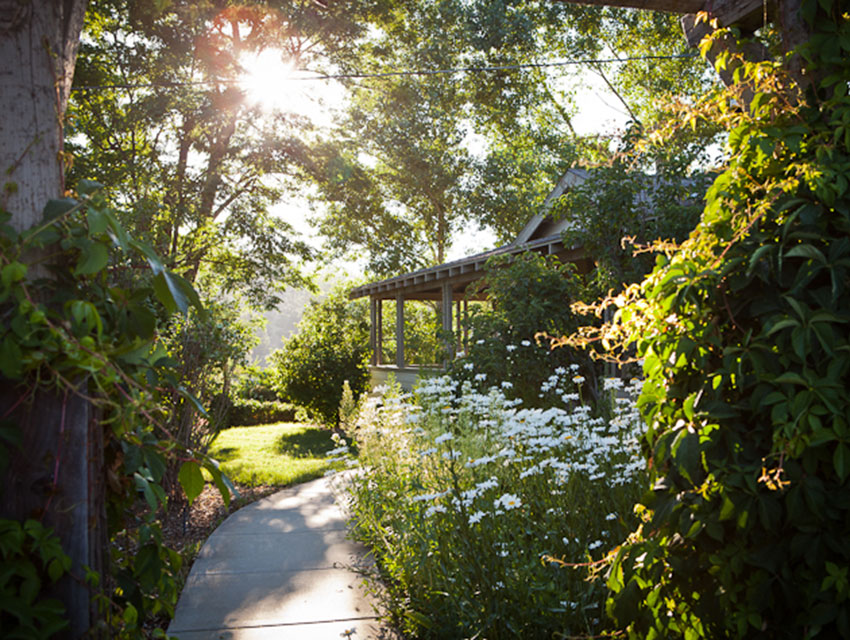 In the annals of the California gold rush, Julian was a story of too little, too late. Situated 50 winding miles northeast of San Diego in the Cuyamaca Mountains, Julian didn’t experience its eureka moment until 1869—two decades after the forty-niners began flooding the state—when cattle herder and former slave A.E. “Fred” Coleman spotted a few flecks in a creek. While Julian’s haul topped out at less than $5 million, a rancher named James T. Madison started another boom in 1880 by harvesting 500 pounds of apples from a single tree. Nowadays orchards can hardly keep up with the demand for Julian pie and cider. Not that these are the only reasons people visit. Surrounded by oaks and pine stands, its 19th-century Main Street lined with stone-and-clapboard restaurants and storefronts, Julian can be as charming as the people who live and bake here.

»Morning
There are rental cabins and a few historic hotels in Julian, but it’s hard to beat the tranquillity of the Craftsman-inspired Orchard Hill Country Inn (760-765-1700; $195-$450), where spacious lodge rooms and cottages offer near-panoramic views of rugged hilltops. You can grab breakfast in the main lodge, filling up on British-style shirred eggs and home-baked apple bread. Or for a lighter start, stroll to Main Street’s Julian Coffee House (760-765-1906) for an espresso and a fresh Danish while you eavesdrop on town gossip. Afterward, pop into a few of the shops in the historic district. At the Birdwatcher (760-765-1817), there’s a bottomless collection of feeders and birdhouses, along with guidebooks on the region’s abundant ornithological life. In addition to the usual nuts and bolts, the homey Julian Hardware & Mercantile Co. (760-765-0123) has a good selection of Pendleton blankets, moccasins, and camping gear. Up the way, local hipsters have turned a bygone livery into The Old Well (760-527-4014), a combination vintage clothing emporium, vinyl-only record shop, and tiny concert venue. During the fall harvest, apple picking is best done in the calm of morning, before the day-trippers stream in. Calico Ranch (858-586-0392) is one of the more established orchards that allow you to pluck your own, with more than 130 varieties across 30 acres. You can also hunt for apples at Raven Hill Orchard (760-765-2431), whose grounds are dotted with sculptures by co-owner Patrick Brady.

»Afternoon
Lunch doesn’t get more local than at Buffalo Bill’s (760-765-1560), where the signature burger is made of grass-fed bison from the Star B Ranch in nearby Ramona. If you’re neither too claustrophobic nor prone to earthquake angst, tour guide Kim Gordon at the Eagle and High Peak Mine (760-765-0036), off C Street, will take you through the underground labyrinth of what used to be one of Julian’s richest claims, his snow white prospector’s beard a beacon in the gloom. Essential to any whirlwind historical outing in the area is the Julian Pioneer Cemetery, which you ascend by climbing a steep “casket walk” to a bluff above Main Street. When you’re done, freshen up with a dram at the Julian Cider Mill (760-765-1430) as you browse the store’s array of pure maple syrup, fancy preserves, and innumerable nuts. Julian isn’t prime wine country, but a few miles northwest, in the town of Wynola, the Orfila Vineyards & Winery tasting room (760-765-0102) will introduce you to some nice petite syrah and port produced in Escondido. Buy a bottle, stop at the Julian Pie Company (760-765-2449) for a tin of the town’s finest, and head to Jess Martin county Park. Then spread out that Pendleton blanket and watch the sun settle into the hills.

»Evening
In spring, summer, and early autumn, nightfall sends a soft breeze through the Cuyamacas. Make the most of it with pan-seared Colorado lamb or grilled California rib eye steak with mushroom ragout served alfresco at Jeremy’s on the Hill (760-765-1587). On weekends at Wynola Pizza Express (760-765-1004) you can sit on the patio and listen to live bands croon about love, loneliness, and the occasional freight train as you work on an Asian-inflected sumi salad or a tostada pizza under the gathering stars. In case you want a better grasp of what’s up there, owner Mike Leigh of the Observer’s Inn (760-765-0088) leads visitors on $20 guided tours of the cosmos. He’ll sketch out the constellations for you with a laser pointer and, through the eyepiece of a 16-inch Meade Schmidt-Cassegrain LX200, introduce you to red giants, nebulae, and other intergalactic phenomena before calling it a night. Sight Seeing: Photo courtesy Shore Hotel
»Population: 1,502. The four seasons: Daffodils in spring, star-bright nights in summer, the apple harvest in autumn, sledding in winter. Angling: Nine miles south of downtown Julian, you can fortify yourself with a Tyrolean breakfast at Franz Dorninger’s Lake Cuyamaca Restaurant (760-765-0700) before casting for trout in a rental boat. Core values: In early October the Julian Apple Days festival celebrates the fruit of all prosperity. Gobblers: In 1993, a group of hunters released 243 Kentucky wild turkeys in a ranch just north of Julian. Today several thousand roam the surrounding mountains.
Photograph by Peden and Munk