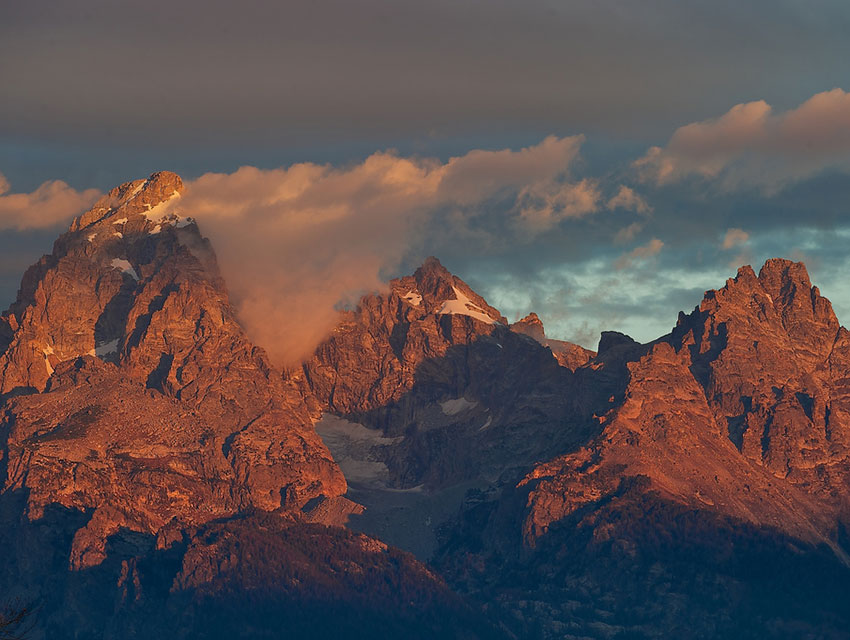 Jackson wears its cowboy duds better than other western destinations. Built south of the jagged Grand Tetons along the Snake River in the Jackson Hole valley, the town suffers under the crowds that head for Yellowstone’s busiest gate in the summer. After the first snowfall, when herds of elk take refuge in nearby fields, Jackson becomes the quiet haunt of ski bums, unemployed ranch hands, and the very wealthy, who are drawn to the area’s low property taxes and open spaces. This mix has spawned a hamlet that has better restaurants than Mammoth and more character than Aspen. But with a 4,000-foot drop that is one of North America’s ultimate tests for skiers and boarders, Jackson Hole’s slopes may make the biggest impression of all.

Teton Village sits a dozen miles north of town at the base of Jackson Hole Mountain (888-333-7766 or jacksonhole.com), the area’s ski resort. The newest digs are at the recently opened Hotel Terra (800-631-6281; $289-$409) —one of 16 LEED-certified green lodgings in the country. The floors are heated, the coffee is fair trade, the interior is earthy and mod, and suites come with full kitchens. From Terra’s back door you can walk to the lifts, but set the alarm early and drive to Jackson for breakfast at the Bunnery (307-733-5474), a homey institution where you can get oat and sunflower-seed waffles or four-inch biscuits topped with eggs and peppery gravy. Take a stroll afterward on the town’s wood-plank sidewalks, past granite-block buildings and the elk-rack arches that form entryways to the town square. Then it’s back to the resort to sample the trails. The easiest runs are on Apres Vous Mountain, but if you feel you’ve acquired your legs, ride the new tram to Rendezvous Mountain’s peak. Half the resort’s trails are expert only, none more so than Corbet’s Couloir—a 20-foot drop into a steep funnel of a slope.

Après-ski starts early on the heated patio at the nearby Four Seasons (307-732-5000), where Scotch and hot chocolate are served a few feet off Teewinot run. The X Games crowd tends to go to the Mangy Moose (307-734-3959), a frat house featuring waitresses in miniskirts, performances on the buffalo-gut electric harp, and a Sam Smith in every air dog’s hand. When you’re in the mood to venture out, make the short drive north of Jackson to the National Museum of Wildlife Art (307-733-5771), built onto the eastern slope of the soft Gros Ventre Butte. The café fare is simple and the bison paintings are numerous, but the sight of elk foraging on the hillside is matchless. For a closer look, take a sleigh ride from the Jackson Hole and Greater Yellowstone Visitor Center through the National Elk Refuge (800-772-5386). If the sleigh trip doesn’t cool you or your kids down, steer back to Jackson and stop at Moo’s Gourmet Ice Cream (307-733-1998), a tiny counter offering homemade organic peppermint of Altoidal intensity. While you’re there, don’t forget to pop into Skinny Skis (307-733-6094) to replace that glove you lost along with your courage on the couloir.

If you’re ready for a night out and find yourself regretting that Nice Tetons! shirt you bought, wheel over to the unfelicitously named Jackson Hole Traders (800-451-1717), where clothing by Eskandar and Rick Owens drapes the walls. Almost every bar and restaurant in Jackson lies within a five-block area of downtown. At Million Dollar cowboy Bar (307-733-2207), located on the main square, you can have a snort (or two) of whiskey while seated on one of the saddle stools that surround the bar. Koshu Wine Bar (307-733-5283) is a wee bit more elegant, pouring Argentine rosés and New Zealand Rieslings alongside small plates. Just about everybody in the neighborhood recommends the rack of lamb at the Blue Lion (307-733-3912) as the best dish in town. Dick Cheney’s crowd can be found at the sleekly rustic Snake River Grill (307-733-0557), while Rendezvous Bistro (307-739-1100) remains the hometown favorite because of the slow-roasted pork and the octopus salad prepared by former Maple Drive chef de cuisine Roger Freedman. When the snow is falling—and considering that 605 inches fell last year, there’s a good chance it will be—you can do no better than to get a table at Hotel Terra’s Il Villaggio Osteria (also run by Freedman). Some might say the rapini orecchiette and the quattro stagioni pizza served here would even inspire Mozza’s line crew.

Jackson Hole in 60 Seconds
The name: Jackson is the town. Jackson Hole refers to the valley encompassing the town. Population: 9,000. Mountain closing date: Usually the start of April. Getting there: Connecting flights to Jackson Hole from Salt Lake City International Airport (slcairport.com) are available, but you’ll save money driving the four hours. Bottle service: Westside Wine & Spirits, a mile from Teton Village, has the best prices and the friendliest staff. Local favorite: When the mountain gets crowded, they head an hour northck to Grand Targhee Resort (800-827-4433).