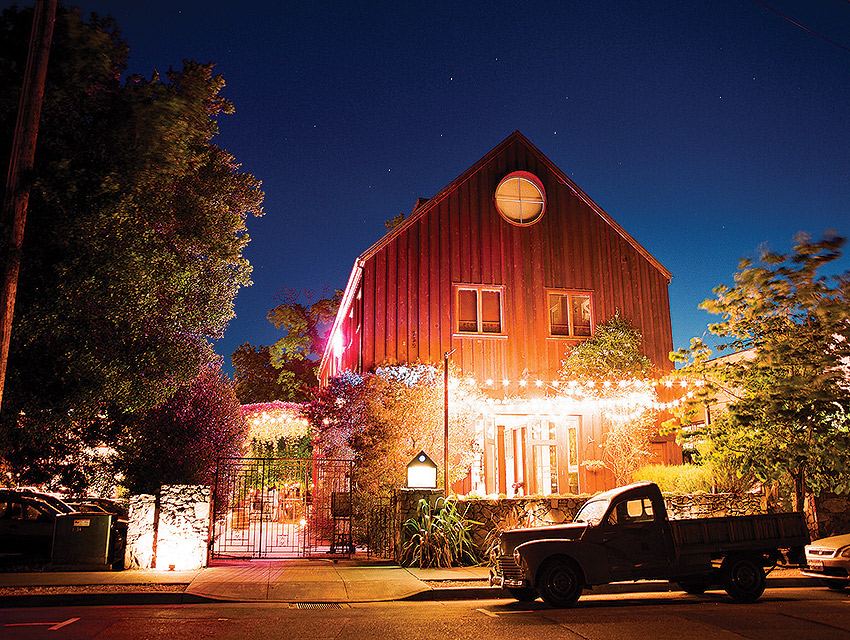 Fed by the Russian River, Healdsburg lies at the center of the Sonoma Valley, the funkier, more down-to-earth alternative to the Napa Valley. That’s not to say the town of 11,500 can’t hold its own against Napa’s finest. Surrounded by vineyards, it’s long been a draw for oenophiles who prefer a slightly less commercial wine country experience. Even as Healdsburg has developed into what may be Sonoma’s most urbane hamlet, it manages to be authentic at the same time. There’s a wealth of restaurants that offer world-class farm-to-table fare and a downtown in which contemporary shops share the street with turn-of-the-century storefronts.

Morning
If anything signaled the town’s shift toward the stylish, it was the opening of the Hotel Healdsburg (rates: $329-$930) in 2001. The Zen-like space was joined nine years later by its playful, ecofriendly sister, the h2hotel (rates: $245-$609), where reclaimed wood and bright colors accent the modern aesthetic. After showering in a bathroom lined with Heath Ceramics tiles, you can sample the h2’s complimentary buffet of bagels, lox, and pastries. Or walk a block up Healdsburg Avenue, and cross the shady central plaza to Downtown Bakery & Creamery for sticky buns and rounds of focaccia (the founders worked at Chez Panisse). Half a block north, the baristas at Flying Goat Coffee can parse the complexities of single-origin roasts as they make a chocolate and cinnamon-laden Aztec latte. It’s easy to spend several hours browsing the shops that surround the redwood-lined square, among them the picnickers’ provisioner Oakville Grocery and smart boutiques like the laid-back but upscale Rete California. A block away at SHED, situated in a tastefully industrial building that’s true to its name, chic farmhouse-style dishware is displayed alongside obscure cocktail bitters. The popular breakfast and lunch spot attracts repeat customers with house-made kombucha and wood-fired pizzas. On Saturday mornings between May and October, there’s a farmers’ market next door; most of its produce is grown within ten miles. A few blocks south and east, Matheson Street is dotted with Queen Anne and Greek revival homes, which you can admire as you make the 4.1-mile loop around the town on a bike from the h2.

Afternoon
Sonoma has more than 150 wineries clustered in its three main appellations: the former prune hub of Alexander Valley, known for its merlots and cabernets; the Dry Creek Valley, for its zinfandels; and the Russian River Valley, for its pinot noirs (Green Valley and Chalk Hill are subappellations). Where to start? Drive north on the 101, exit on Dry Creek Road, and you’ll find yourself winding along gentle curves past vine-covered hills. You can join the cyclists queuing up at Dry Creek General Store for miniature biscotti and sandwiches layered with Caggiano ham. Save yours for a picnic up the road at Preston Farm & Winery. Lou Preston, the godfather of Dry Creek Valley who’s been tilling his 128-acre spread for more than 40 years, has diversified his biodynamic operation to include sustainable farming. After you sample the mourvèdre and carignane, pick up a bottle of Preston’s olive oil and a loaf of fresh, chewy bread. Thirty minutes south, you’ll come to Inman Family Wines, where Kathleen Inman’s Endless Crush, a rosé of pinot noir that she made as a gift for her husband, has proved so popular, she sells it by the pallet. Once back in town you can enjoy a hoppy respite at Bear Republic Brewing Company, whose ten-beer sampler makes choosing easy.

Evening
Great food is ubiquitous in Healdsburg; the problem is deciding where to eat. Locals joke that the toughest reservation to book is about ten miles away, in Forestville, at the Farmhouse Inn & Restaurant, a haute-bucolic B&B with a new spa and nine new rooms. One of two Michelin-starred restaurants in the region (the other is Madrona Manor), the Farmhouse serves a seasonal prix fixe menu that might include Dungeness crab with squid ink orzo and pairings from a master sommelier. In Healdsburg proper, Barndiva occupies an airy space modeled after a barn, crafting inventive cocktails with the same care it lavishes on dishes like chilled asparagus soup and Sonoma duck. Around the corner at Mateo’s Cocina Latina, Northern California meets the Yucatán in such dishes as cochinita pibil (slow-cooked pork in a citrus-tinged achiote chile sauce). The sidewalks in Healdsburg roll up early, so if you want a nightcap, slide onto a stool at Spoonbar, the h2’s snazzy watering hole, for, say, an old-fashioned made with chai-infused bourbon. The fire pit in back is especially pleasant on summer nights. You may even want to stay for another round (or two); it’s only a short walk to the elevator before you hit the organic cotton sheets in your LEED-certified room.

Getting There
You can fly to Oakland International Airport, then drive the 80 miles to Healdsburg. Alaska Airlines has three daily flights from LAX to Charles M. Schulz-Sonoma County Airport; after 90 minutes, you touch down ten miles from town.

Peak Time
During high season (May through October), hotels often can’t keep up with demand, so book well in advance. The Healdsburg Jazz Festival kicks off the summer season at the end of May.

Alfred Hitchcock made Bodega Bay famous in The Birds, but even if you’re not beside Tippi Hedren in an Aston Martin, the harbor is worth a visit. The drive is less than an hour if you take scenic Westside Road. Stop in Guerneville for a burger and some suds at Stumptown Brewery, where the deck overlooks the Russian River. Or you can wait: In Bodega Bay there’s clam chowder at Spud Point Crab Company, a cliffside view, and a town that’s still storybook cute.