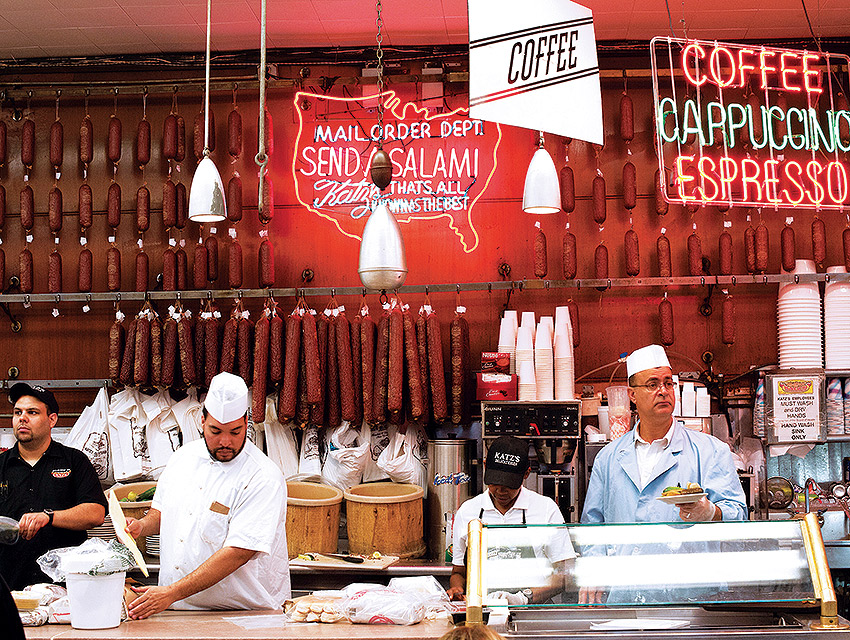 Morning
If the three-hour time change has made early rising impossible, stay in your jammies and begin your safari with the morning menu at your Flatiron District hotel, the NoMad ($365-$900). Opened in 2012, the beaux arts lodging, with its petite Parisian-style rooms, places you in a strategically central location. The kitchen prepares a croque madame—intricately weaving the ham into the bread—as well as delicate pastries, including a purple croissant that would make Sherry Yard blush. Then again, you could always take a brisk one-mile walk (building an appetite is key to this excursion) to Ess-a-Bagel, a 38-year-old standby on 1st Avenue. The shiny-crusted rings and assortment of schmears are worth the 20-minute queue. Eight blocks away, in Union Square, the daily Greenmarket provides another enticing pit stop. Its produce has nothing on Santa Monica’s farmers’ markets, but the hearth-baked goodies, farmhouse cheeses, and fresh meats are stellar. Afternoon
By midday the light pours into the sunken dining room of Il Buco Alimentari e Vineria in NoHo; plunk down at a communal wood table for chef Justin Smillie’s roasted porchetta panino and a fizzy glass of Lambrusco. Or go meatless with a haute veggie bur-ger and house-brewed lemon-ginger soda at ABC Kitchen, Jean-Georges Von-gerichten’s fine-dining salute to produce. From there, Mario Batali’s epicurean cathedral, EAT-ALY, is a half-hour walk north, back in the Flatiron District. If you’ve already eaten, you can score an autographed pepper grinder. If not, grab some take-out vittles for a picnic on the West Side’s High Line. The 1.5- mile-long park—and its views of the Hudson—transformed Chelsea when it opened atop an old elevated train track in 2011. You’ll spot herbs and kales sprouting between the ties as you make your way to The Standard, the hotel known as much for its sceney rooftop bar as for floor-to-ceiling windows that expose a bit too much to passersby. For another kind of pick-me-up, there’s Kava Cafe, a tony coffee shop down the street from the Standard; its wood-paneled interior is as gorgeous as its latte art. Or keep chugging along the High Line to the mammoth indoor Chelsea Market, where you can slurp a few oysters from Cull & Pistol or select something aged and funky from the artisanal cheese shop Lucy’s Whey. Evening
After resting in your room at the NoMad, you won’t have far to go for dinner. Plates of butter-dipped radishes and suckling pig confit are favorites at the hotel’s remarkable in-house restaurant overseen by chef Daniel Humm, who also runs the neighborhood’s three-Michelin-starred Eleven Madison Park. A tad south of the hotel is Nolita’s Torrisi Italian Specialties, a phenomenal 21-seater whose ever-changing tasting menu might include a mustard pot-au-feu one night and sheep’s milk gnocchi another. Nearby, in Greenwich Village, Carbone feels as if it’s been around for half a century (think Dan Tana’s with a gourmet bent), but the shrine to Scor-sese-style linguine, meatballs, and veal parm is only a year old. A dessert that should be required eating in Manhattan is the butter bomb known as Crack Pie at the Momofuku Milk Bar, the sweets-only minichain from pork-bun bad boy David Chang and pastry chef Christina Tosi. Then head to Crif Dogs, a hot dog joint in the East Village; the telephone booth inside is the portal to the clandestine cocktail lounge PDT (“Please Don’t Tell”). Reservations are recommended, but once you’re in you’ll be treated to founder Jim Meehan’s singular libations: Try the old-fashioned made with bacon-infused bourbon and maple syrup. Or venture farther north for a nightcap worthy of Salvador Dalí at the King Cole Bar in the painter’s onetime home, the St. Regis. You can suss out the secret that’s hidden in the bar’s recently restored Maxfield Parrish mural while savoring an $850 snifter of Frapin 1888 cognac—or maybe just a $20 martini. After all, you still need cab fare home.  Getting There
JetBlue and Virgin America—both stylish and tech savvy—dominate the LAX-to-JFK route with competitive pricing. In addition to flying out of LAX, JetBlue departs from Burbank and Long Beach. Virgin America has frequent one-way specials for less than $200—if you don’t mind flying in an iPod.

Peak Time
There’s no time of year when you can truly avoid the crowds, but accommodations are less expensive in January and February.

Weather Report
Hot and humid in summer, cold and gray in winter: We love New York City most in May, when you can see the tulips in full bloom—along with the locals.

Side Trips
Brooklyn is becoming as much a foodie hub as Manhattan. Start in Williamsburg with a fried chicken-and-biscuit sandwich at Pies ’n’ Thighs. To make like the crew on Girls, get a slice of pizza from Roberta’s or go to Smorgasburg at Brooklyn Flea, where stalls hawk everything from lumpia to black-and-white cookies. Following a tour of Brooklyn Brewery, sit down for a seasonally inspired dinner at Chef’s Table, the borough’s only Michelin-starred spot.