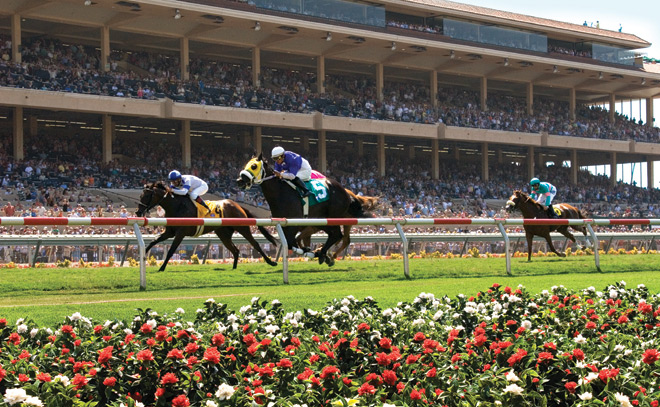 From the moment railroad engineer Theodore Loop saw the silvery sands south of San Dieguito Lagoon, he was smitten. In 1882, he erected a tent city on the tranquil beach that he christened Del Mar. Fast on his heels was builder Jacob Taylor, whose Casa del Mar resort, which boasted its own train station, was the locus of a residential community he developed in the mid-1880s. Alas, the hotel burned in 1889, and the town mostly slumbered into the 1930s, when horse racing aficionados picked it as a place to grow their sport—newly returned to legal status after a two-decade state ban. Crooner Bing Crosby and actor Pat O’Brien lobbied for a Del Mar track, and since its opening in 1937, the venue has lured tens of thousands of visitors each summer.

Morning
Del Mar unfolds like a velvet blanket between the cliffs of Solana Beach in the north and the craggy highlands of La Jolla to the south. Unlike its hilly neighbors, the town has unencumbered access to the beach, interrupted only by the occasional passing train. Along Camino Del Mar, the village’s main drag, stands Prepkitchen, a rustic-hip restaurant that sources local ingredients for such hearty brunch dishes as a Porter beef hash and offers unlimited coffee refills. From there it’s a five-minute walk to the 26-year-old Rusty Del Mar Surf Shop on 15th Street. See a swell in the distance? Sign up for surfing lessons. Fog on the horizon? Pick up a comfy hoodie before ambling to the beach to take in the view at Seagrove Park or from the benches and playground equipment of adjacent Powerhouse Park. On the concrete path to the water you’ll pass the quaint, now-shuttered train station. The beach is unusually wide even at higher tides, with runners blissing out over the flat, firm sand and surfers over the lack of crowds. You might also observe that rare sight of canines romping freely; the stretch north of Powerhouse is a famed dog beach that dispenses with leashes nine months of the year.

Afternoon
If shopping is your thing, visit the three-story Del Mar Plaza. Men can make for Garys Studio, with its Wall Street-appropriate apparel. Women can go casual at Urban Girl Accessories, whose products skew local and are ecologically correct, from the Chavez for Charity bead bracelets to the lotions from Napa-based Olivina. Break for lunch at the plaza’s Del Mar Rendezvous, which serves modern Chinese cuisine that includes such gluten-free gems as beef chow fun. You don’t need to be an equestrian to enjoy scenic Del Mar Racetrack, where the turf literally meets the surf. The track’s seven-week season starts July 17, and it’s wise to book lodging weeks in advance. The racing action begins at 2 p.m. except on Fridays, when the 4 p.m. start time allows for a smooth segue into the evening concert series. Early risers show up at 7:30 a.m. for “Daybreak at Del Mar,” when watching the horses work out doesn’t cost a penny and on Sundays a breakfast buffet is available for just under $10. Less ardent fans can arrive at noon with a picnic of cheeses from Venissimo, a shop in the renovated Flower Hill Promenade, and stake out a spot in the infield for a mere $6. Or opt for the grandstand to sip craft beers and nosh on gourmet tacos at 17 Hands, the track’s new dining venue. Inspired by the equine action? Motor to the village’s half-timbered Stratford Square, where the Frustrated Cowboy stocks ranch-ready boots, belt buckles, shirts, and hats that might make you switch your loyalties from thoroughbreds to quarter horses.

Night
The Grand Del Mar ($375-$575), located in Peñasquitos Canyon, east of the village, is one of the state’s great luxury resorts. It also houses the region’s top destination restaurant, Addison, whose exquisite Asian-inspired and French dishes change with the season. The hotel cuts no corners: The marble used throughout the buildings is among the world’s costliest, Mediterranean tiles are framed and displayed like art, and the spacious rooms are outfitted with fine custom-made furniture. The resort features an equestrian center, should you prefer to ride the surrounding trails rather than walk them. If you want to sleep steps from the beach, L’Auberge Del Mar ($305-$3,000) extends its seaside ambience into the rooms with decorative shells and ocean flora prints. You can keep the Pacific in view at all times on the hotel’s Waterfall Terrace, which serves breakfast and lunch and adjoins a nighttime bar and fire pit. To catch the sunset, hike to the top tier at Del Mar Plaza for the bird’s-eye glimpse afforded by the public benches. For an oceanside experience head to the patio at Jake’s, where crispy calamari and barbecued ribs await long after the normal lunch hour. Romantics should make a dinner reservation at the plaza’s Pacifica Del Mar restaurant. There they can savor beautifully prepared seafood—the swordfish and sea bass are often caught in nearby waters—and look out from the terrace as the colors of the setting sun bloom across the horizon.

Side Trips
Torrey Pines State Natural Reserve, two miles south of Del Mar, offers some of the Southern California coast’s most dramatic vistas. Trails wind through scrubland that’s home to the endangered tree and another rarity—an active nude beach (Black’s). Nearby Encinitas was once a flower industry hub and is still home to the San Diego Botanic Garden, which celebrates all plants in a smartly curated collection.

Getting there: Del Mar is located just off the I-5 about 100 miles south of Los Angeles. Many daytrippers let Amtrak do the driving, exiting the train at the Solana Beach station, where free double-decker buses take passengers to the track.

Peak time: The population of the sleepy town explodes in July and August because of the allure of the storied track and its richly landscaped grounds, perched at the edge of the Pacific.

Weather report: It’s not uncommon for this stretch of coastline to be shrouded in fog on summer mornings, but starting in July the marine layer usually burns off by midday. Daytime temperatures average 75 degrees.