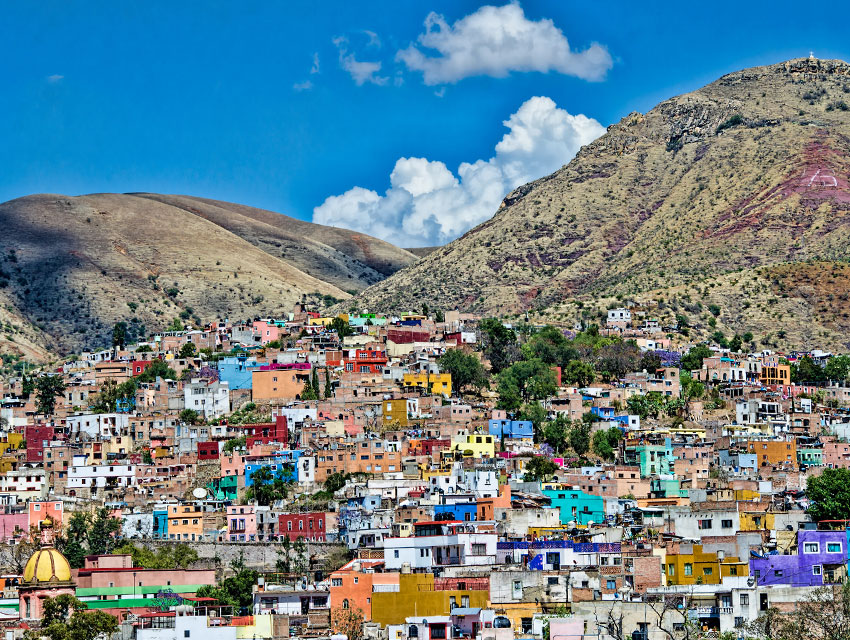 To call Guanajuato the most Spanish of Mexican cities, as it has occasionally been deemed, is to both honor it and sell it short. Tucked into the plunging mountains of the country’s geographic center, about 200 miles northwest of the capital, this 16th-century silver mining town is a colonial jewel of cobblestones and curlicues and spires and alleyways. It is fine to recognize those qualities as Spanish (the city is a UNESCO World Heritage Site), but Guanajuato is as genuine and gracious as Mexico gets, which is to say that it is among the most Mexican of Mexican cities. Unlike, for instance, Cabo or Cancún, Guanajuato never makes a traveler feel like a tourist: Its charms, its hidden plazas and outdoor cafés, belong to everyone who wanders the steep and twisty paths.

Morning
The heart of Guanajuato, as in most of traditional Mexico, is the town square, known here as the Jardín de la Unión. A triangular park, it is covered in wide red tiles, lined with wrought-iron benches, and topped by a thicket of Indian laurel. This is the place for coffee and a shoe shine, to watch the city stir to life and to strike up a conversation. Across the street is the baroque Teatro Juárez (473-732-0183), the century-old opera house that serves as the main stage for the Cervantino Festival, a three-week celebration of international arts and culture held every October. Even if the theater is dark, you can explore the elaborately gilded and mirrored interior for a couple of dollars. More vertical than sprawling, Guanajuato sits atop a warren of tunnels and caverns through which much of the city’s traffic is routed. To get a sense of the impossible topography, ride the Funicular Panorámico, a 250-foot ascent via railcar, to a spectacular lookout. Houses in cobalt and salmon and mustard spill into ravines and arroyos with scarcely enough flat land for a soccer field. Overseeing it all is the giant stone figure of El Pípila, a miner who, in 1810, torched a Spanish granary, inciting a key battle of Mexico’s War of Independence.

Afternoon
No map can untangle the town’s circuitous avenues. But as you learn to trust your way around, you can walk to the bustling Mercado Hidalgo, the center of working-class commerce that began life as a train station, until city engineers had to concede that Guanajuato was too rugged to accommodate trains. Adventurous eaters will want to sit at one of the crowded lunch counters, where the masses eat carnitas and cactus salads. A more refined option is La Casa del Conde de la Valenciana (473-732-2550), located in the former home of a Spanish count and a ten-minute cab ride through the hills. The vine-covered courtyard feels ancient, even with Enya on the stereo, and the gazpacho is served in a glass bowl that has been embedded in a ring of ice. Back in town, there are a couple of museums worth visiting—the Museo Casa Diego Rivera (473-732-1197), where the legendary muralist lived the first six years of his life, and the Quijote Iconographic Museum (473-732-3376), which is filled with hundreds of paintings, some serious and some pure kitsch, depicting the Man from La Mancha. But the museum that has put Guanajuato on the map is the Museo de las Momias (473-732-0639): the Mummy Museum. Part biology experiment, part freak show, part holy site, it houses the mummified remains of dozens of cadavers, their faces frozen in exaggerated horror. Exhumed between 1896 and 1958 after relatives fell behind on their burial payments, the bodies are said to have been preserved by minerals in the soil—and now, for a $5 admission fee, they can turn any day into Day of the Dead.

Evening
A 15-minute walk from downtown takes you to the Villa Maria Cristina (866-424-6868), a new boutique hotel fashioned from a 19th-century town house. Take a dip in the dimly lit Roman-style pool, which is surrounded by pillars and marble, or retreat to your woodfloored suite and fire up the steam valve in the enormous glassed-in shower. Days end as they begin, around the Jardín, where mariachis roam from café to café. At the Bar Tradicional Luna (473-734-1864), every drink comes with a free appetizer. Befitting the university town that it is, Guanajuato is not known for extravagant dining. But dinner at El Abue (473-732-6242), whose owners trace their roots to Italy and Oaxaca, is exceptional, especially the chiles en nogada sprinkled with fresh pomegranate seeds. One of the great student traditions here is the callejoneada, a procession of song and drink through Guanajuato’s labyrinthine alleys. If you get lucky, the troubadours might even wend their way to Kiss Alley, where the balconies are close enough for neighbors to lean across for a smooch.