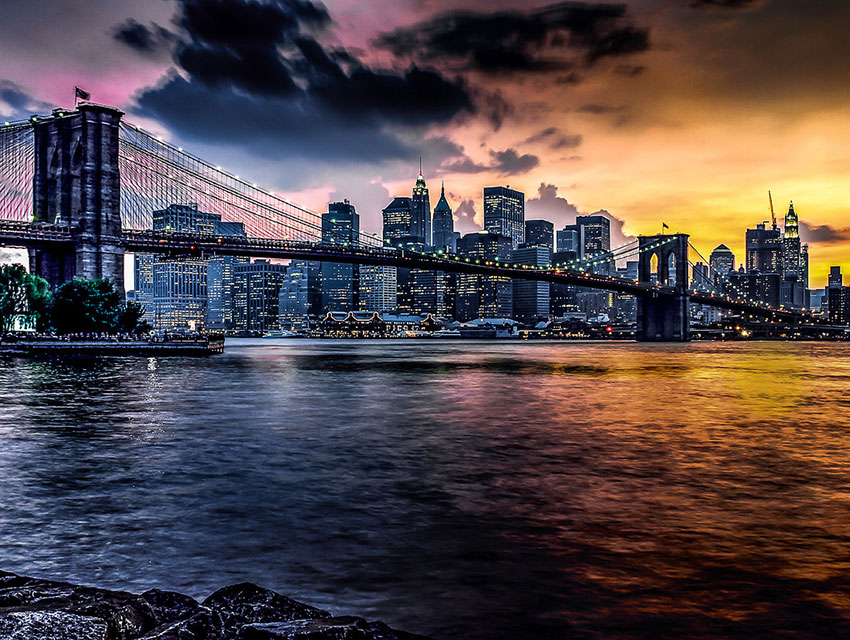 Think of America’s great historic cities and Savannah, Santa Fe, and Boston spring to mind—each deeply rooted in mythology, each blessed with strong architectural bones. Brooklyn deserves the same stature. Poets and novelists—Walt Whitman to Marianne Moore, Norman Mailer to Jhumpa Lahiri—have long lived here and rhapsodized about the borough, which had it not consolidated with New York City in 1898, would be America’s fourth-largest city. It’s also one of the country’s most diverse places, with Hasidim in Borough Park, Poles in Greenpoint, Russians in Brighton Beach, and West Indians in Flatbush. The latest wave of migrants? Hipster hordes (young clubbers, new parents) who have settled into Park Slope, Cobble Hill, Fort Greene, and other graceful enclaves that may be gentrifying but haven’t lost their character—yet.

»Morning
Unless you had a friend with a futon, Brooklyn was until recently a day trip from Manhattan. The boutiquey Hotel Le Bleu (718-625-1500; $169-$309), a modern base camp on an uninspiring stretch of busy 4th Avenue, has changed that. Cross 4th, walk alongside Washington Park’s baseball field (the first home of the Brooklyn Dodgers), and you’re in Park Slope. Known for its brownstones, distinctively set back on leafy streets, the neighborhood has two main shopping and eating drags: 5th and 7th avenues, where the tables at sidewalk cafés are filled with Brooklynites who know from brunch. At Rose Water (718-783-3800), order a watermelon-ginger agua fresca to wash down the smoked fluke cakes with poached eggs, then take an autumn stroll through Prospect Park (718-965-8951) on the neighborhood’s eastern border. Designed by Frederick Law Olmsted (you may know his larger work, Central Park), Prospect’s “Long Meadow” (one mile in length) is a bucolic and surreal sanctuary in the midst of the city. The park is also famous for its Brooklyn Botanic Garden (718-623-7200), a 52-acre wonderland with a lily pool, a cherry tree esplanade, and a bonsai museum. If you head in the opposite direction from the hotel, you’ll find yourself in Carroll Gardens and Cobble Hill. Wander the trendy shops along Court or Smith streets and pop into Cafe Pedlar (718-855-7129) for an espresso and a slice of cake flavored with blood orange and olive oil or stout and ginger.

»Afternoon
Next door to Prospect Park is the Brooklyn Museum (718-638-5000), a beaux arts beauty by McKim, Mead & White that is one of the largest art museums in the country. (A free “Heart of Brooklyn” trolley links them on weekends.) The hard-to-miss Soldiers’ and Sailors’ Memorial Arch, built in 1867, is the borough’s answer to the Arc de Triomphe and one of the starting points for free walking tours of the area led by Urban Park Rangers. After hopping on the subway to DeKalb, you can check out the Fort Greene Greenmarket, held every Saturday until 5 p.m., where you can pick up seasonal fruits and locally made baked goods. The adjacent Fort Greene Park is a much smaller but no less stunning work of Olmsted’s. Walk down Oxford and Lafayette streets to find out why Brooklyn is called the “City of Churches.” If you want to spread your wings, grab a subway to Bushwick for some wood-fired pizza at Roberta’s (718-417-1118)—funky, artisanal, and perfect for 24-year-old aspiring artists or those who enjoy watching their mating rituals. For something heartier, try the pulled pork and grits at Peaches (718-942-4162), tucked in a nice niche of overlooked Bedford-Stuyvesant that is filled with handsome brownstones.

»Evening
Even joggers pause during their runs on the Brooklyn Heights Promenade to take in the sun setting on the Lower Manhattan skyline. For a less expected but equally dramatic vista, walk northeast to the new waterfront Brooklyn Bridge Park. Sandwiched between the Manhattan and Brooklyn bridges, the park lies along the edge of DUMBO, short for Down Under the Manhattan Bridge Overpass. While other neighborhoods in Brooklyn are being rediscovered, DUMBO is being invented. Cobblestone streets, hulking factories turned lofts, galleries, and cool shops like PowerHouse Books (718-666-3049), the Half Pint Citizens children’s boutique (718-875-4007), and Jacques Torres Chocolate (718-875-9772), with its chocolate-dipped Cheerios, make DUMBO a mandatory stop. The neighborhood of Williamsburg has a zillion bars where you can have a drink before taking a seat at a communal picnic table at Fette Sau (718-963-3404) for a plate of barbecue. For more upscale dining, go to Clinton Hill, where Locanda Vini e Olii (718-622-9202) is housed in a 100-year-old former pharmacy. The restaurant serves a potent chestnut lasagnette and tender Piedmontese beef and radiates all the elegance and warmth you’ve come to expect from your new favorite borough.

»Brooklyn in 60 Seconds
Population: 2.5 million. When to visit: September and October are gorgeous. Getting there: Brooklyn is, depending on rush hour and which neighborhood you’re visiting, a good 20 to 30 minutes from Midtown Manhattan on the subway; you can also take the AirTrain-subway combo from JFK for a minuscule $7. Bargain hunting: Stoop sales are Brooklyn’s version of garage sales; at the end of the day, what remains usually goes into a free pile by the curb. Side trip: Coney Island is a schlep, but seeing the famed amusement park—particularly in the empty dawn hour—is unforgettable.