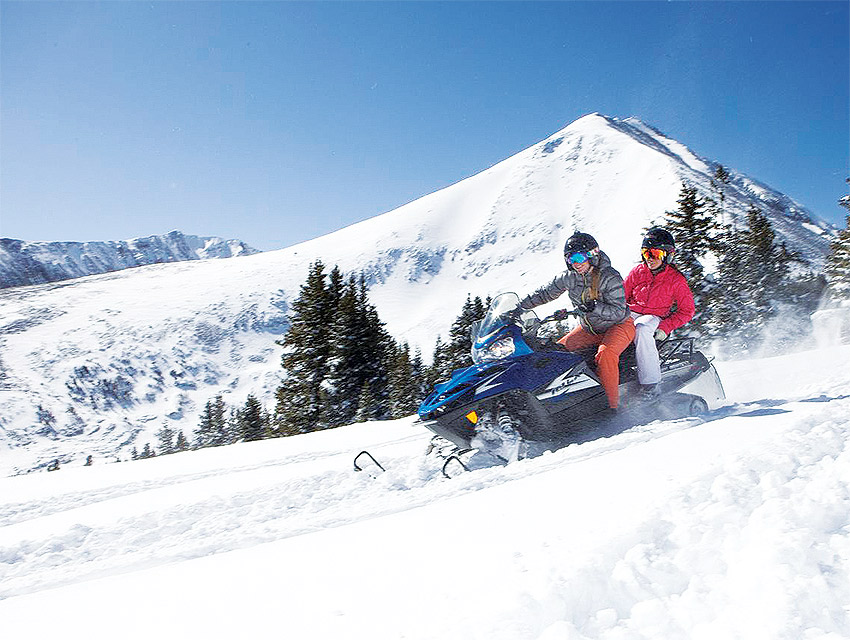 It doesn’t generate the buzz of Vail, its glitzy cousin less than an hour to the west, and that’s half the reason so many skiers and boarders seek out Breckenridge. Founded in 1859 during the Pike’s Peak gold rush, the town has maintained its frontier character while evolving into one of Colorado’s most popular resorts. You’ll find plenty of spots where you can warm up in the National Historic District, whether you like your après-ski with a glass of wine, a pint of local beer, or a hunk of grilled venison. A major terrain expansion unveiled this year is all the more motivation to make the two-hour drive from Denver.

Morning
If you’re torn between slopeside accommodations and digs that are closer to downtown, split the difference with a condo at Mountain Thunder Lodge ($143-$899). Completed in 2006, the resort offers unprepossessing rooms and the sort of rustic touches (note the deer antler chandeliers in the lobby) you’d expect at the base of the Tenmile Range. When you want someone else to fix breakfast, make the ten-minute walk to Amazing Grace Natural Eatery, a yellow clapboard cottage where you can fill up with a sturdy biscuit sandwich of sausage and scrambled eggs. For a sugar high to match the town’s 9,600-foot elevation, walk another quarter mile to Cool River Coffee House, not far from the banks of the quiet Blue River. The frosting on the cinnamon roll must be a quarter-inch thick and goes swimmingly with a malted milk ball hot chocolate. As a leading ski town, Breckenridge has the requisite retail, including nearby Hand & Glove, with its selection of scarves, sweaters, and chic handwear. Back near the lodge, you’ll find the gondola that lands at the base of Breckenridge Ski Resort, where the terrain is varied and vast enough to keep you and yours busy for several weekends. Topping out at 12,998 feet, Peak 8 boasts the highest lift in North America, while the newest addition, Peak 6, opened this season.

Afternoon
The short gondola ride makes it easy to pop back into town for an organic burger piled with pickled onions, harissa ketchup, and bacon from the food cart Stella’s Hungry Horse. By then, though, you may be tempted to call it quits and start sipping the vodka, spiced rum, and award-winning bourbon in the small tasting room at Breckenridge Distillery, just off Main Street. Thirsty for more? You can visit the spirit maker’s 4,000-square-foot mothership two miles away. Breckenridge has tried to stay true to its historic roots with a building code that complements the rustic cabins and saloon-style structures that have survived the decades. The life of the town’s most fascinating resident is documented at the Barney Ford House Museum, the home of the former slave who became a wealthy hotelier and civil rights pioneer. You’re not far from Cuppa Joe, where you can get a jolt of espresso made with beans from Denver’s Novo Coffee and a scoop of Ice Cream Alchemy, concocted in nearby Boulder. Or save your sweet tooth and hoof it to Daylight Donuts to snack on a glazed specimen by the wall of license plates. If you’re not spending time on the slopes, you might be surprised at how much fun you’ll have surveying the wilds. Local operators, such as Breckenridge Snowmobiling, offer tours of different speeds.

Evening
Happy hour starts early in Breckenridge (this is ski country, after all), and nearly every restaurant and bar advertises one. At Relish, a stylish and friendly bistro that serves upscale American fare, the “2 for $10” deal allows patrons to choose a beer, a glass of wine, or a basic cocktail along with a seasonal small plate, which might be a caprese salad or an artichoke filled with yellow lentils. A block and a half away, its sister restaurant, the lively Twist, offers such modern comfort food as beef tips with potato-leek cake and trout with pumpkin-porcini risotto; house-made limoncello is a specialty. The more staid Hearthstone, which operates out of a converted two-story Victorian, is the place for elegantly plated renditions of elk glazed with blackberry sauce and buffalo short ribs braised in Madeira. After dinner you can catch a concert at Riverwalk Center, which helps anchor the town’s arts district. Not ready for bed? Sip a creamy vanilla porter or crisp Avalanche ale at Breckenridge Brewery and Pub, where five 20-foot-high stills bubble away. For something with more of a patina to it, try the divey Gold Pan Saloon. In business since 1879, it claims to possess the oldest liquor license west of the Mississippi (sad to say, the spittoon that once sat on the mahogany bar was stolen). Walking out through the swinging doors, the mountain sky speckled with stars, you can almost imagine what it was like back when the gold rush was at its height.

Planning Ahead: The 2.5-hour flight from LAX to Denver is easy, but be sure to leave extra time to get out of Breckenridge. On Sunday afternoons Interstate 70 is often jammed with weekend warriors heading home.

Peak time: High season lasts from November through April, when snowfall averages more than 300 inches per year. In January the town hosts the International Snow Sculpting Championships as well as Ullr Fest, known for its frying pan toss and crazy parade.

Weather Report: Winter temperatures typically range from the teens to the 30s, but storms can dump inches of powder on the region in mere hours. Even on warm summer days the alpine climate is prone to brief and sudden showers.

Side Trips: A lift ticket to Breckenridge lets you ski at Keystone and Arapahoe Basin, about 20 miles to the east. With an Epic Pass, you can also get to the slopes at Vail and Beaver Creek, less than an hour away in Eagle County. Or visit the gold rush hamlet of Idaho Springs, about a third of the way from Denver to Breckenridge. You can see a refurbished, mid-19th-century locomotive, tour the remains of a gold mine, or soak in a geothermal cave bath at the Indian Hot Springs resort.

This Snowy Getaway Is Exactly What You Need Right Now