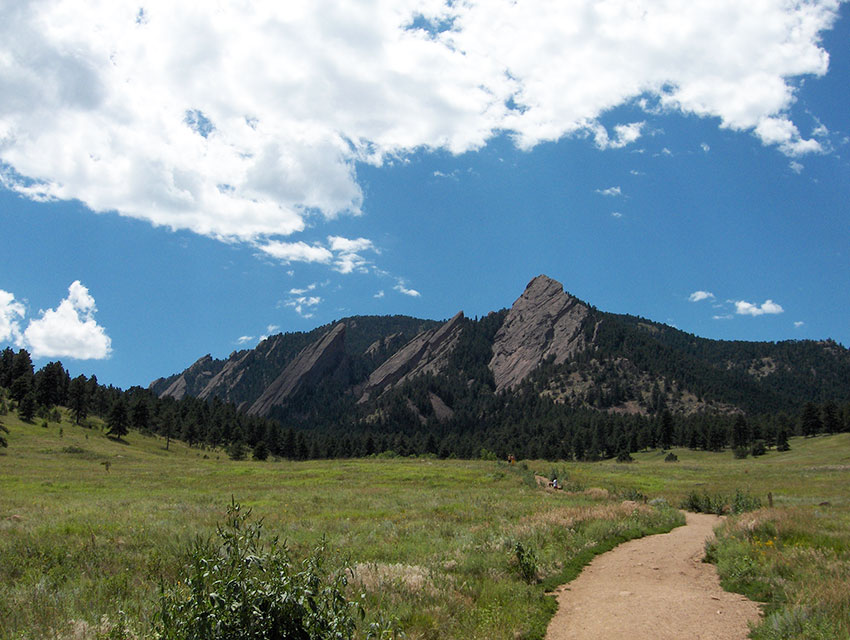 Back around 1900, as the University of Colorado Boulder campus came of age and the Chautauqua cultural center opened on the edge of town, Boulder touted itself as “the Athens of the West.” Now with the media so eager to pour on praise, who needs boosterism? If anything, the knock against Boulder—burdened with acclaim as the happiest place in America (Gallup), the country’s top sports community (Outside), and the nation’s “foodiest town” (Bon Appétit)—is that it’s just too good to be true. But hike into 45,000 acres of open space minutes from downtown, or take your pick of smart, casual restaurants, and you’ll discover that it’s not all Rocky Mountain hype. As flaws go, perfection is tough to beat.

Morning
Join the early risers at Ozo Coffee Co., where the engaging baristas will prime you on the virtues of pour-over versus French press versus Chemex brews. Farther east along Pearl Street, downtown’s main drag, Snooze breaks from Boulder’s stalwart red brick with an orange latter-day Googie design. The puff-pastry breakfast potpie with rosemary-sausage gravy and the pancake flight (make one the sweet potato) have powered plenty of hikes among The Flatirons, the slanted sandstone slabs that loom over Boulder. Trails lead into the Flatirons from the Colorado Chautauqua. The cultural retreat that opened in 1898—historic cottages are available for stays—hosts concerts (Lucinda Williams plays this month), lectures, and even a combination hike and performance of As You Like It. To sample the bakeries, growers, and cheesemakers who supply Boulder’s chefs, graze the Saturday Boulder County Farmers’ Market. During market hours, admission is free at the Boulder Museum of Contemporary Art, which is housed in a vintage storage building by the food stalls. Next door, the Boulder Dushanbe Teahouse was a gift from Boulder’s sister city in Tajikistan. With columns and ceiling panels carved and painted by Tajik craftsmen, the teahouse, which serves an array of green and black tea blends, is the only building of its kind in the United States.

Afternoon
Boulder is a magnet for mountain bikers and road cyclists, with foothill trails and paved routes climbing into the Rockies. For an introduction, pedal the Boulder Creek Path, which travels seven miles through the University of Colorado campus past fly fishermen and beneath a forest canopy on its way into Boulder Canyon. You can rent cruisers from the Boulder B-cycle bike-share kiosks along the path and at racks around town. For more intense outings, University Bicycles rents high-performance bikes—or just stop in to check out the collection of vintage rides. A block down Pearl Street, The Kitchen [Next Door] is a spin-off of one of Boulder’s most lauded restaurants, the Kitchen. The soothing gray interior is both modern and rustic, while the menu skews toward updated comfort food (the Sunday special is a breakfast burrito smothered in a sauce of pork and green chiles). A few blocks east, the Pearl Street Mall is Boulder’s counterpart to the 3rd Street Promenade with its covey of buskers. National outdoor and active-gear brands have showcases on Pearl, but everything from knives to flip-flops can be found at the Boulder Army Store, and there’s a big selection of hiking books and nature guides at the Boulder Book Store, which hosts frequent author appearances. Peppercorn is a rambling cookstore, with gourmet foods, cookbooks, and kitchen equipment. In the East Pearl District former Tour de France rider Will Frischkorn and his wife, Coral, oversee a changing selection of local and imported cheeses as well as charcuterie at the gallery-like Cured. Hidden away in an industrial park beyond downtown, the Avery Brewing Co. draws hopheads for tastings of seasonal beers and classics like Ellie’s Brown Ale.

Evening
Clad in sandstone and with rooms looking out to the Flatirons, the St Julien Hotel & Spa blends contemporary design (slate bathrooms, angular poster beds, modern photos of Boulder scenes, cork wall coverings) and an ideal location near Pearl Street and the Boulder Creek Path. In the lobby locals join guests for Saturday afternoon tea and nightly live music. The city’s original grand hotel is The Boulderado, which opened in 1909. Stop in to admire the cherry wood staircase and stained glass ceiling. There are so many outstanding restaurants in town, singling out a dinner spot is challenging, but splurge on the four-course meal at Frasca Food and Wine. The seasonal cuisine, inspired by the Friuli region of northern Italy, lives up to the restaurant’s buzz; the first bite of ravioli filled with poached egg yolk and creamy Parmigiano-Reggiano is pretty unforgettable. Two Fras-ca alumni opened OAK at fourteenth, where the focus is rustic New American cuisine. Seats along the chef’s bar provide a front-row view of the kitchen action, and even if you don’t eat here, mixologist Bryan Dayton’s creations offer cool comfort on summer nights.

Side Trips
Not that you really need more outdoor recreation options around Boulder, but Rocky Mountain National Park lets you explore a Colorado high country of alpine lakes, wildflower-filled meadows, and waterfalls. Parts of the park are within 45 minutes of Boulder, and while it features more than 300 miles of trails, you can get above timberline on drives along Trail Ridge Road, which tops out at 12,183 feet.

Getting there: Boulder is 35 minutes northwest of downtown Denver and about an hour from Denver International Airport. United Airlines has the most nonstops from LAX, but Southwest also has direct flights out of Burbank. Peak time: Expect crowds on July 4 and Labor Day, and also on fall football weekends when the University of Colorado plays at home. If you’re intent on trying a restaurant, definitely make dinner reservations. Weather report: Boulder is at 5,430 feet, with average summer highs in the mid-80s. Afternoon thunderstorms can roll in from the Rockies.