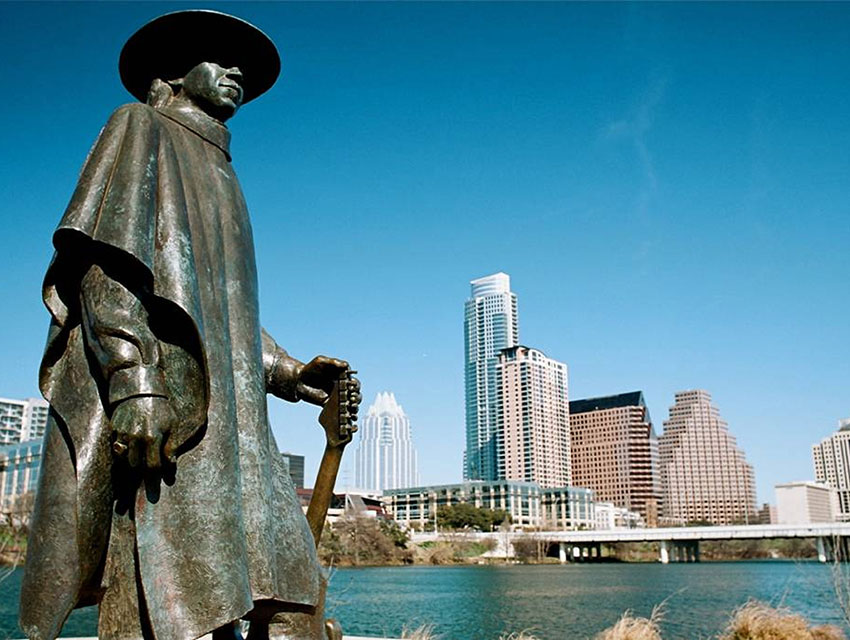 With the beatific smile of Willie Nelson beaming down from the stage on many a weekend in the ’70s, hippies and rednecks at Austin’s bygone Armadillo World Headquarters merged, creating what people called cosmic cowboy culture. The tech boom of the ’90s ushered in New Austin, which brought high-rise condos and more sophisticated dining to a city that had lived on barbecue and Tex-Mex. It also broadened Old Austin’s vaunted music scene, with modern rock acts outnumbering roots and country groups. Combining conferences and festivals for music, film, and interactive media into a massive ten-day trade event, South by Southwest unites both sides of the city. This year’s begins March 11, and come September there’s the Austin City Limits Music Festival, the public music-and-arts bash that was spun off from the acclaimed PBS show.

»Morning
You might as well begin your day the way seemingly half of Austin does—with a walk, run, or ride along the ten miles of trail lining Lady Bird Lake (512-477-1566), which is what the Colorado River is called where it cuts through downtown. Afterward you’ll feel less guilty about devouring the gargantuan Don Juan—eggs, potato, bacon, and cheese atop a tortilla—at Juan in a Million (512-472-3872), a neighborhood joint on Austin’s Latino East Side. Hip hotelier Liz Lambert was thinking of the Beatles at London’s tony Savoy Hotel when she transformed a secluded 1800s house and former B&B into the boho-lavish Hotel Saint Cecilia (512-852-2400; $295-$610), just south of the river in residential Travis Heights. The snug property—five suites, six poolside bungalows, three studios—is a five-minute walk from the SoCo (South Congress Avenue) strip, whose vintage and specialty stores skew decidedly Old Austin. When the 251-room W Austin (512-542-3600; $269-$2,500) opened in December as the cornerstone of the emphatically New Austin 2nd Street District, its Living Room became downtown’s most happening bar. Next to the W building is the no-technology-spared Austin City Limits Live at the Moody Theater (877-471-4225), home of the PBS ACL music series tapings.

»Afternoon
A quintessentially Texan lunch, the brisket at Franklin Barbecue (512-653-1187) is so moist, you could almost bathe in it. Perla’s Seafood and Oyster Bar (512-291-7300) in SoCo has the freshest selection of fish and oysters in town. Sample the city’s blossoming arts scene at the Arthouse at the Jones Center (512-453-5312), a sleek exhibition space downtown. The ten smart-ass members of the Okay Mountain Collective (512-293-5177), who pillage consumerism and mock pop art even as they embrace it, curate like-minded works by other artists at their East Side gallery. The University of Texas campus can fill an afternoon by itself. Its Lyndon baines Johnson Library & Museum (512-721-0200) offers a surprisingly two-sided view of that Texan’s embattled presidency. The school’s Harry Ransom Center (512-471-8944) displays the first photograph ever taken (France, 1826) and one of the five Gutenberg Bibles (circa 1450) in the United States, while the Blanton Museum of Art (512-867-3080) boasts a renowned Latin American collection. No visit to Austin is complete without a dip in the Barton Springs Pool (512-476-9044; it reopens March 12), where the water averages a bracing 68 degrees year-round.

»Evening
From mid-March until November, hundreds gather at sunset beneath the Congress Avenue Bridge (512-327-9721) to watch the world’s largest urban bat colony—up to 1.5 million Mexican freetails—stream out of its home there. (The bats winter in Mexico.) For dinner try the cochinita pibil (pork baked in a banana leaf) and other dishes from Mexico’s interior at Fonda San Miguel (512-459-4121), an Old Austin staple. Or walk to 2nd Street District’s La Condesa (512-499-0300), named after Mexico City’s coolest barrio, where the pork ribs are glazed with spicy guava and the Malverde bar upstairs pours 96 brands of tequila. Housed in a modern building amid auto repair shops, Olivia (512-804-2700) serves haute comfort food like grilled bison heart with chili sauce and crème fraîche. Though the Esther’s Follies (512-320-0198) comedy troupe based on Sixth Street (Austin’s Bourbon Street) is the longest-running show around, live music still rules in this city. Try the Mohawk for rock, legendary honky-tonk the Broken Spoke (512-442-6189) for hard country, and The Continental Club (512-441-2444) for roots and retro. With well over 200 venues in the city, you’re bound to find something you like.