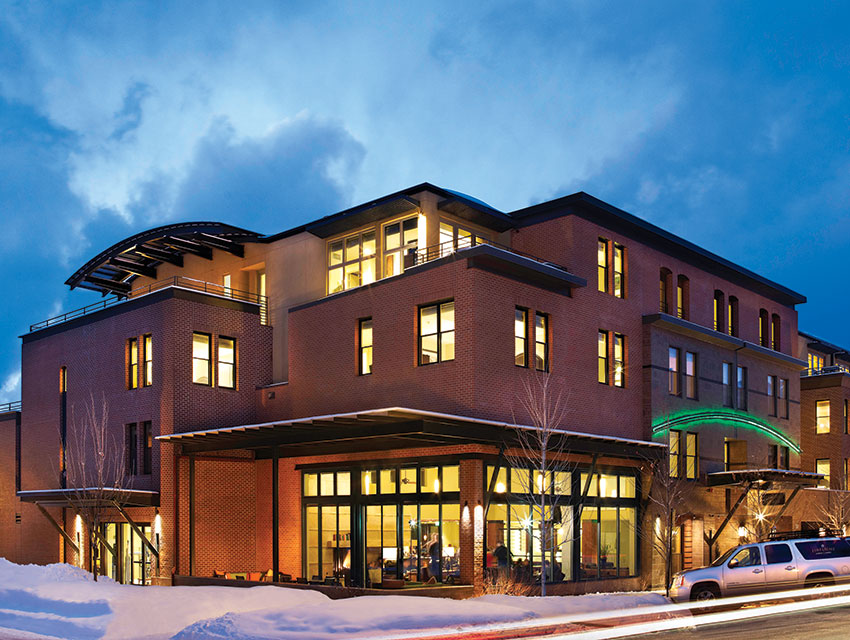 Viewing Aspen through the lens of Frette and Fendi, celebrities and second homes, is to see only part of the image. Carpeted with white-trunked aspen, the three-and-a-half-square-mile town lies in a box canyon between three mountains—Red, Smuggler, and Aspen—and is framed in the near distance by peaks that rise like spirits more than 14,000 feet above sea level. Once among the country’s most productive silver mining camps, the area has become one of the glitziest ski resorts. But there are still ways to enjoy the town—and the ESPN Winter X Games at the end of the month—without the $800 hotel room and $22 burger

The Gulfstream set may choose the elegant St. Regis (970-920-3300; $379-$3,929), which recently updated its lobby and guest rooms, but their pilots are checking into the Limelight Lodge (800-433-0832; $120-$2,255). Comfortable and hip, it’s the only hotel where Aspen Skiing Company instructors meet on Monday and Thursday mornings to take guests on free, all-day guided tours. Breakfast is included at the Limelight, but the hotel’s shuttle can take you gratis to bb’s kitchen (970-429-8284) for house-smoked Scottish salmon or to Poppycock’s Cafe (970-925-1245), a kid-friendly spot with fast service and killer oatmeal buttermilk pancakes. One bonus that distinguishes Aspen from other resorts (aside from the complimentary sunscreen, morning coffee, and afternoon cider) is the opportunity to ski or ride four mountains (877-282-7736) with one lift ticket. Aspen Mountain, in town near the Limelight, and Aspen Highlands are venerated for their thigh-burning steeps. Families head to Snowmass for its abundance of intermediate slopes, while Buttermilk—home to the ESPN Winter X Games—is known for its gentle cruisers and terrain parks. A two-day adult lift ticket will set you back $206; for a third of the price the Aspen Cross Country Center (970-925-2145), at the golf course just outside town, teaches a class on cross-country skiing and rents snowshoes.

A stroll along the heated sidewalks, past some 60 art galleries, independent shops, and historic Victorian buildings, reveals a ski resort where skiing is, well, optional. After having a shot at Victoria’s Espresso (970-920-3001), which doubles as a wine bar, hit the Aspen Art Museum (970-925-8050). Located near the Roaring Fork River on the city’s north edge, the small, modern space charges nothing and often exhibits international artists. Back in the center of town, the sharp staff at Ute Mountaineer (970-925-2849) can guide you on finding the right skiing, climbing, and hiking gear. Or suit up for the next night out at Pitkin County Dry Goods (970-925-1681), which has smart men’s and women’s collections along with a huge selection of leather jackets. Ajax Tavern (970-920-6334), at the base of Aspen Mountain, attracts the après crowd with its sunny deck (tip: between 3 and 6 p.m. oysters are $2). Four blocks from the mountain is Peach’s Corner Café (970-544-9866), a less pricey option where a pressed sandwich, pizza, or salad with, say, avocado vinaigrette won’t cost more than $12. Pyramid Bistro (970-925-5338), upstairs at Main Street’s Explore Booksellers, serves vegetarian dishes like sweet potato and mushroom lasagna; the sprouted quinoa salad with mango and jicama is especially good. On the first floor, don’t miss such rare and out-of-print books as Hardy Boys titles from 1929 and a 1957 first edition of Eloise in Paris.

Getting there: United Airlines has the most flights to Aspen, which is 220 miles west of Denver, but American and Alaska also offer two-hour, nonstop flights.

Weather report: At 7,908-feet elevation, Aspen gets 300 inches of snow a year, with the heaviest snowfall in February.

Aspen Expeditions (970-925-7625) leads overnight ski tours to cozy huts that the 10th Mountain Division U.S. Army soldiers used while training in WWII. For a shorter adventure, drive north on Highway 82, then east on I-70 past Glenwood Springs to exit 125 and hike up the 1.2-mile Hanging Lake Trail to gaze at frozen waterfalls. Bring good hiking boots and ski poles.