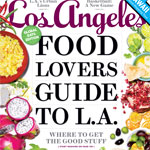 For Marcel Proust a madeleine famously opened the floodgates of memory. A ripe pineapple does it for me: One nibble and I am returned to a beach that has been cleansed by a brief morning storm, a trade wind rustling through coconut palm fronds and the sweet scent of plumeria hitting like a fragrant uppercut. One bite and I’m back in Hawaii… Read

Ghost Cat
By Mike Kessler
A vestige of L.A.’s feral origins, cougars are rarely seen but everpresent in our hills. On the trail of the feared predators

WEB EXTRA: Read “Telling Tails,” a Q&A with Mike Kessler about this feature

On Hawaii Time
By Matt Jaffe
Road-trip through the Big Island’s quiet climes, with side trips to Kauai, Maui, and Oahu

L.A. Archetype
A veteran firefighter on being first to the scene

L.A. Story
Lucy Liu tells of a New Yorker’s love for the other coast

How L.A. Works
The finer points of the Cinerama Dome

The Luxe Life
Advertising CEO Aaron Walton, whose clients include the Dodgers, is a runway model in his other life. He shares six items he’s coveting now

Culture Files
Richard Avedon is back in the public eye; Bettina Korek revives a Westwood art scene; our city’s own library of Alexandria PLUS: Isabella Rossellini has an insect fetish

Best of LA
Everyone’s a comedian at these laugh factories

The Guide
30 things to do in November, from taking in a fancy fight night to tracking the Afro-futuristic sounds of Janelle Monáe

Sports
By Matthew Kredell
With new coaches at USC and UCLA, is the basketball rivalry between the two schools about to get real?

Well-Being
By Andrea Richards
We’ve all heard about the restorative wonders of B12 injections. But are the shots really doing what everybody says they do?

Taking Back The Night

Make It a Mai Tai