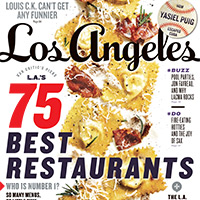 Several years ago the magazine began hosting breakfast conversations with Angelenos of interest. At my invitation, 75 people or so gather before work to hear me talk about the future of the LAUSD with Superintendent John Deasy, say, or watch me grill outgoing police chief Bill Bratton. One morning last year I got insight into one of my favorite TV shows, asking the head writers of Breaking Bad for dish on the final season. For sheer civic import, no breakfast topped the one I hosted a few weeks ago with Los Angeles mayor Eric Garcetti… Read

75 Best Restaurants
By Patric Kuh
We pit L.A.’s finest pasta twirlers, grill masters, seafood slingers, and spice wranglers against one another to find who reigns supreme. See who came in first—and get eating

Safe
By Jesse Katz
Yasiel Puig made $17 a month playing baseball in Cuba. Now his contract with the L.A. Dodgers promises $42 million. But the route he took between those two worlds was treacherous. And it’s not so far behind him

Track Star
By David Kipen
One of Los Angeles’s most iconic buildings and the grande dame of California’s rail hubs, Union Station turns 75 this year. No longer a forlorn monument to a lost era of transportation, it’s now busier—and spiffier—than ever

Ask Chris
Chris Nichols pays a trip to the junkyard

L.A. Story
Swingers’ Jon Favreau on the joys and perils of car ownership

The Seen
The party circuit’s most coveted sightings

How L.A. Works
The balancing act behind LACMA’s Levitated Mass

The L.A. Man’s Guide to Style
Scores of things that should be on every guy’s radar—from locally made colognes and streamlined grills to tailored suits and custom shoes

Dining Out
157 of the city’s best restaurants, from the Factory Kitchen to Mess Hall

The Guide
30 things to do in May, from a psychedelic music festival to a Harry Potter skate night

Politics
The June election is changing the face of the county’s most important governing body: the Board of Supervisors
by Hillel aron

Urban Affairs
For Middle Eastern gays and lesbians, Club Nur has been a place of acceptance and solace
By Liana Aghajanian

Well-Being
Treating addiction isn’t only about abstinence. It’s about the right medicine.
By Andrea Richards