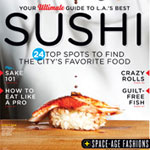 We’ve taken to featuring real people in our fashion packages. I don’t mean to imply that models aren’t real people. It’s just that I see our style section as an opportunity to showcase local folks—diner waitresses, say, or a rock group like the Silversun Pickups. In this issue you’ll meet the stars of the Sundance Channel’s Push Girls… Read

Sushi in L.A.
Edited by Lesley Bargar Suter
From Little Tokyo to the Valley’s “Sushi Row,” L.A. pairs rice and raw fish like nowhere else. With special attention to sustainability, we dive into the city’s number one cuisine

Saint of the Hood
By Ed Leibowitz
Father Gregory Boyle’s Homeboy Industries has helped save the lives of countless former gangbangers. But can it survive the crushing cost of manufacturing hope?

Vegas Rising
By Dave Gardetta
Between the revitalization of downtown—with its new restaurants and watering holes—and a roster of incoming properties on the Strip, the desert playground is reinventing itself again

How L.A. Works
The nuts and bolts of Star Waggons

L.A. Men’s Style Guide
Wardrobe essentials and one-stop shops for connoisseurs as well as the clueless

WEB EXTRA: See behind-the-scenes video from our fashion shoot with the Push Girls

Culture Files
Memorializing the art of the living in a place for the dead; looking at a groovy L.A. sect through the camera lens; getting the last laugh on nerdism at an eclectic comic book store plus: The Tonga Hut marks 55 years of tiki

Best of L.A.
Seeing the city on foot offers perspectives you won’t get in a car. Here are walking tours worth putting on comfy shoes for

The Guide
30 things to do in May, from munching on strawberries to making like a Venetian

Well-Being
By Andrea Richards
We all know tobacco can kill us, a fact ignored by secret smokers