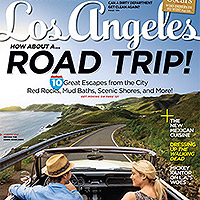 Four days into 2014, I lost my mom, Ruthe Powell Melton. She was 83. Born in Hollywood, she was my role model, joke supplier, shoulder to cry on, and closest friend. She was also the coolest L.A. woman I knew. Her passing has made me aware of how much she taught me about living, and how those lessons take shape in this magazine. I wanted to share her pearls of wisdom. Let’s call them “Mom’s Commandments”… Read

It’s Time for a Road Trip
Edited by Matthew Segal
No matter which way you point the car, there’s a journey waiting to happen. We take you up the coast, through the desert, into the ancient, and on to the new

Downfall
By Celeste Fremon
While Sheriff Lee Baca embraced lofty ideals, he let his number two, Paul Tanaka, call the shots. The toxic mess that resulted was something right out of a cable series

WEB EXTRA: Celeste Fremon talks with her editor, Matt Segal, about the Los Angeles Sheriff’s Department and an assignment that was a year in the making

The Custom Treatment
Edited by Ann Herold
When it comes to home decor, these L.A. artisans are masters of one-of-a-kind furnishings and floors, wall coverings and metalwork

CityThink
How L.A. is preparing for catastrophes; memories of Oscar night at the Music Center; novelist David Grand pens a love letter to 19th-century L.A.; signs of a city’s downward spiral

Ask Chris
Chris Nichols follows up on a story most fowl

How L.A. Works
Tracing the world’s most famous footsteps

WEB EXTRA: Behind the scenes of our Spring fashion shoot

WEB EXTRA: What else is happening at Grand Central Market?

Dining Out
139 of the city’s best restaurants, from Petros to Picca

Culture Files
Pentatonix sings with one voice; Ozomatli hits the old neighborhoods for its eighth album plus: Literary critic David Kipen on what he’s reading

Best of LA
Get toned at these high-end spinning studios

The Guide
30 things to do in March, from lowbrow art shows to St. Patty’s Day shindigs

Open City
By Anne Taylor Fleming
Mickey Kantor has some harsh things to say about L.A., but they come from a deep affection for his adopted city

Film
By Steve Erickson
Whatever happened to likable lead characters? Plus: Who should really win at the Oscars

Invisible L.A.
By Ben Ehrenreich
Unearthing the story of the Chinese laborers who helped build the region’s railroads

Well-Being
By Andrea Richards
When you master non-violent parenting, there are no “bad” feelings, only “big” ones